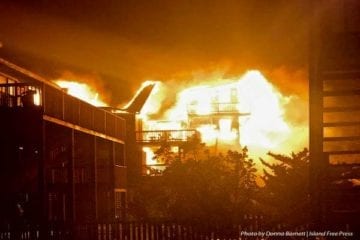 A fire that hit two homes in Hatteras village was put out at 9:30 p.m., more than two hours after it started, with no injuries reported, according to Dare County Fire Marshal Steven Kovacs.

A 911 call was received at 7:04 p.m. Friday night in reference to a residence fire on Empire Gem Lane in Hatteras.

Driven by sustained winds of 29 to 34 mph, the fire spread to an adjacent home, but crews were able to put out the second house fire quickly before turning their attention back to the first house.