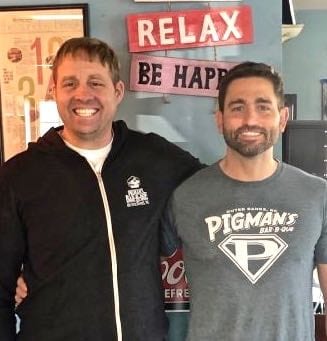 How did you guys get into the food biz?

Richard: I grew up in an Italian family on a farm; lots of hard work on the farm, lots of hard work in the kitchen. I liked the kitchen better. Top and I went VMI together. I joined him for the summer after graduation to drink beer and chase girls (we were a lot better at drinking beer!).  Always loved food and joined him at Pigman’s.

Top: Been coming to the Outer Banks forever. Got a summer job at Pigman’s in Duck the summer out of VMI. I loved it, learned the business, and the opportunity came to take it over from original owners of 35 years.

Top: My brother had rented a place here for a year, but needed someone to take on the lease through the Summer. I did, took the job at Pigman’s, and never left.

Richard: I think our first year taking over was most significant. It was not during the best time. But of all foods, BBQ seemed recession-proof. BBQ is like family — you don’t give it up even in tough times. We knew once we got through that first year, we could do this. When you don’t have much to lose, it’s not a big deal.

Let’s get right to the BIG question: Eastern or Western (BBQ)?

Richard: I like all kinds. We feature both Eastern, Western, Brisket, even turkey. Our house specialty is the local tuna BBQ.

Top: I grew up with the tomato-based BBQ, then coming here and having the vinegar-based sauce seemed strange. But now I’d have to say I like it (Eastern) a bit more.

What about the sides. Wwhat’s your favorite?

What about music What kind suits you here at Pigman’s?

Both: We’re classic rock fans, that’s what we play here.

Any guilty pleasures foods that you might not want anyone to know about?

Richard: The Baconator (occasionally), ice cream… think I have three pints of gelato in the fridge at home.

Top: Maybe not guilty, but sunflower seeds. I eat them all the time. Love ‘em. Can’t stop eating them until I finish the whole bag!

When you’re not working, where can we likely find you?

Richard: The gym, working out, swimming — work off that gelato.

Top: Gym as well. Love sports. And I just started volunteering at the Aquarium — really like it!;

Top three people living or dead that you would like to dine with and why.

Top: John Candy — just seemed like so much fun; Billy Joel — my favorite musician; Babe Ruth — he seemed like such a colorful character, someone you’d just want to sit and have a beer with. And I love baseball.  He probably likes to eat the way I do too!

What’s on your bucket list for a foodie destination?

Top: Thailand … I hear such great things, try things I’ve never had, like Scorpion and other wild stuff that you’d never see.

You guys are both known for your generosity. What’s your favorite way to give back to the community?

Top: I love doing all the food tasting events where we can share our food and raise money for a good cause.

Richard: You know I’m kinda partial to the Beach Food Pantry (Richard is chairman of BFP Board), but yeah, we love the tasting events and anything we can do to help the community.