Rosie Hawthorne’s recipes: Got shrimp? Here’s what to do 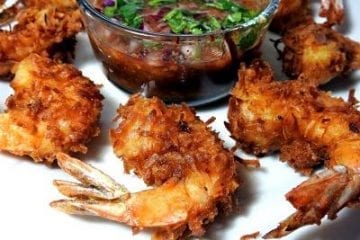 Living where we do, we always have shrimp on hand — usually at least 20 pounds frozen at any time, so a shrimp meal is only a thaw away.

Today, I have three shrimp dishes for you with distinct flavor profiles: one, Asian-inspired sweet and sour, another, homemade barbecue, and the third, coconut fried.

The first is a one-dish shrimp stir fry has assorted vegetables dressed in a hot and sour sauce. It’s terrific just on its own, but you’re welcome to serve it on a bed of rice or noodles. And those assorted vegetables can be anything you want. I happen to like multi-colored bell peppers and snow peas. The toasted peanuts make for a nice crunchy touch. 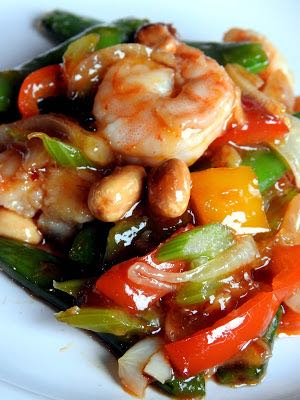 Add hot and sour sauce to skillet and cook until sauce is thickened, about 1 minute. Return vegetables to skillet, stir until heated through, and serve.

As always when cooking shrimp, please do not overcook. You want them just curled and opaque.

My second dish is lightly fried shrimp with vegetables napped with a homemade barbecue sauce, all served on a bed of rice. Frying shrimp, done correctly, really brings out the shrimp flavor. And my barbecue sauce is light enough to perfectly complement the shrimp. 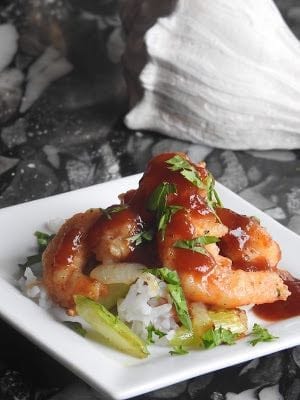 In large skillet, pour in a tablespoon or so of peanut oil to film the surface. Heat over medium high. Add breaded shrimp and cook about 1 minute. Drain on paper towels. Swipe out pan with paper towels to clean and add in another tablespoon of peanut oil. Over medium-high heat, add in celery and onion. Cook for a minute, then return shrimp, stirring to combine. Serve on a bed of rice. Pour a little barbecue sauce over top and sprinkle on some fresh parsley.

This coconut fried shrimp just might be my favorite shrimp preparation of all. Save your biggest and best shrimp for this.

If frying scares you, here are a few helpful tips: 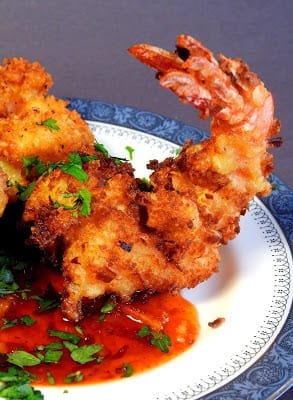 Coconut Fried Shrimp
Peel and de-tract shrimp, leaving the tails on for easier handling. Butterfly the shrimp if desired.

FYI, togarashi seasoning is a spice blend of red chili powder, black and white sesame seeds, nori (seaweed), poppy seeds, and orange and lemon zest. It’s available from Amazon, but you could substitute with your own blend.

Hold shrimp by tails and dip each shrimp in batter, letting excess drip off..

Combine flakes and crumbs. Place mixture in a covered container, add a few battered shrimp at a time, and shake well to coat.

Deep fry shrimp in peanut oil (370° – 375°) about 1 minute, until golden brown. Drain on a rack and serve with assorted dipping sauces.

Dipping Sauce
Mayonnaise
Sriracha sauce
Start with ¼ cup mayo and mix in sriracha sauce by teaspoons, taste-testing until you find the balance you like.