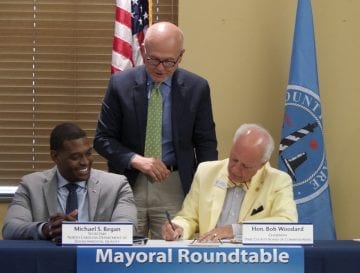 As the Trump administration continues lifting restrictions on exploration for offshore oil and gas reserves, elected leaders attending the Mayoral Roundtable to Protect North Carolina’s Coast at the Dare County Center on Wednesday saw a common threat to their towns’ livelihoods and way of life.

Hosted by Nags Head Mayor Ben Cahoon and Bob Woodard, chairman of the Dare County Board of Commissioners, the meeting underscored the concerns of the state’s coastal towns. Mayors from most Dare County towns as well as Swansboro, Topsail Beach, Surf City, Elizabeth City, Hertford and Plymouth attended.

Meeting with the secretary of North Carolina Department of Environmental Quality, Michael Regan, and key members of his staff, the mayors highlighted their concerns about the effects of offshore exploration and drilling for gas and oil.

Woodard opened the meeting saying, “We cannot under any circumstance allow offshore drilling to occur off our coast. It’s as simple as that.”

He went on to describe his opposition to offshore drilling as a nonpartisan issue. “I sit in this room as a Republican, and I respect our leadership. But I will not support offshore drilling that would damage our economic engine here,” he said.

Woodard’s observations were echoed by Regan.

“We’re proving from the makeup of the folks the room … this is not a partisan issue,” he said. “We have Democrats, Republicans and independents all coming together, united to support the protection of our coastal resources and our economy. This is something that is rare in public discourse.”

The concerns of the mayors went well beyond damage an oil spill could do to their economies. Nags Head Commissioner Renee Cahoon, who chairs the North Carolina Coastal Resources Commission, recounted her memories of growing up in Nags Head in the 1960s and 1970s.

“As a child growing up in Nags Head, every time we had a nor’easter, we had old spills coming up on our beach. That oil came from ships sunk during WWII off our coastline,” she said. “When you connect the dots about how long it lasts, it’s not just a decade or two, it’s several decades.”

The effects of even a small spill were described by Mayor Howard Braxton of Topsail Beach.

“It was maybe three years ago a boat was coming back to Topsail Beach and it ran aground … and it ruptured its tanks. A little oil spilled over and started coming ashore. This was not a lot of oil, but it created a real problem,” he said.

“We had to go in there and start digging oil sand out of the beach. We had to get rid of that oil. And we did that for a week or two weeks or more and it still came on. We didn’t lose too much, but what would happen if we had a big amount, a large amount of oil … coming on to the beach?”

Although the mayors spent much of their time discussing shared concerns, they focused on how to influence elected officials in the second half of the meeting.

Mayor Cahoon began recalled a recent experience when he was asked to bring his views on a Senate bill to permit offshore exploration.

“I was asked to testify in front of a Senate committee a few months ago on this very topic. They needed a witness who was opposed to that bill. I got called to testify,” he said.

He was given two days’ notice of the hearing. As he described it, that gave him one day to prepare and one day of travel, yet he felt  his testimony was effective. He noted the mayors in the room could also be effective voices.

“You could do this as well. You have the passion, you have the voice,” he said.

Mayor Brian Roth of Plymouth pointed out that to be most effective it is important to know where to target the message and to coordinate those efforts.

“We need to think about who those decision makers are. Where the critical nodes are. Where those weak spots are. We all have to be on the same page as much as possible,” he said.

No specific plan of action came from the meeting. The mayors did agree to continue to work together and to grow the group to include more towns and counties in the state. The mayors also agreed to meet with state and federal elected officials or their staff whenever possible.

The final action for the day was the adoption of a resolution, “Coastal Leadership’s Resolution to Protect the Environmental and Economic Future of North Carolina’s Coast.” The resolution passed unanimously.