Work to replenish the beach is expected to reach the Nags Head town line at the Cape Hatteras National seashore in two to three days, when pipes will be relocated to start heading north toward the Outer Banks Fishing Pier.

Crews will move the pipes running south from a submerged line near Limus Street and begin installing it up the shoreline from there. The submerged line runs from an offshore terminal where a dredge delivers the sand.

To finance the 10-mile project, Nags Head is borrowing $11.38 million, $9.57 million will come from the Dare County Beach Nourishment Fund and $5.4 million will be drawn from the town’s capital reserve fund.

The Federal Emergency Management Agency will pay $16 million of the $42.7 million total cost to cover sand losses attributed to Hurricane Matthew in 2016.

About 4 million cubic yards of sand will be pumped by Grreat Lakes dredges from offshore borrow areas. Up to half the visible sand will slide into the nearshore to create a protective slope, according to coastal engineers. Work is being done at this time of the year to avoid risks and delays from unpredictable winter weather.

Here’s how the town sees things shaping up: 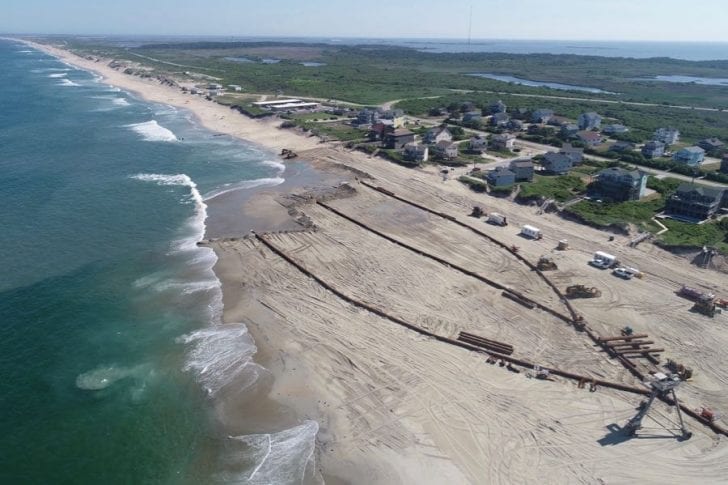 The Dredge Ellis Island is expected to finish nourishing the beach on the south end of her submerged line (this is the pipe through which sand is pumped from the offshore dredge onto the beach) near Limulus Street to Mile Post 21 in the next 2-3 days.

Once that area has been completed, the pipe running south from the Limulus subline will be removed and installed to run north from that subline, so that operations can progress towards Outer Banks Pier and then towards Jennette’s Pier. Construction in the area of Jennette’s Pier.

The second dredge on the project, the Liberty Island, is expected to begin work about May 25 from a submerged line just south of Curlew Street near Mile Post 11.5.

Construction will progress north to Mile Post 11 (2919 South Virginia Dare Trail, which is the Bonnett Street public beach access) first, before moving south from the submerged line near Curlew Street and then further south toward Jennette’s Pier.

Once construction north to the Bonnett Street access is complete, the pipe will be removed and installed south of the subline at Curlew Street so that operations can progress south to meet up with the Dredge Ellis Island’s construction site.

NOTE: Parking at the Juncos and Forrest Street beach accesses will be closed for the duration of the project, which is slated to last 90 to 120 days. However, pedestrian access will still be permitted. Lifeguard stands will still be in place, but may be moved a few feet to accommodate construction traffic.