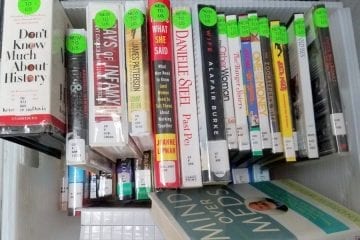 Southern Shores is leading a drive for a library branch to serve communities in northern Dare County and southern Currituck.

“It was an intriguing idea for me,” said Conners.

After informally consulting several local government officials, Conners held a public meeting in March to gauge community interest. Minutes of the meeting characterize it as lively and productive, with roughly 35 people in attendance.

Describing the meeting Conners remarked, “people were enthused and excited about this idea.”

The proposed library would serve residents of Southern Shores, Kitty Hawk, Duck, Martin’s Point and lower Currituck County. As the potential cost of building a freestanding library is a concern, rented space in the Marketplace or the commercial section of Juniper Trail has been suggested to house the facility.

To further develop the idea, Conners is leading the formation of a committee that will be comprised of town citizens, and individuals from Duck, Kitty Hawk and Martin’s Point.

“Appointing a member to serve on the committee will be brought up at the June 3 council meeting,” said Andy Stewart, Kitty Hawk town manager.

In a recent newsletter, the town of Duck requested that citizens interested in serving on the committee fill out the volunteer form located on its website, and forward the information via email or in person.

“We are happy to have a Duck resident participate on the committee,” said Christian Legner, director of public information for Duck.

No specific process exists to get a library branch. “There is no official procedure in either the administrative code or the North Carolina statues,” said Jonathan Wark, director for the East Albemarle Regional Library System.

Wark went on to explain that the issue is seen as a local matter which the county would ultimately decide.

“It would come before the board, and they would have to be convinced to fund it through the capital improvement plan,” said Dare County Manager, Bobby Outten.