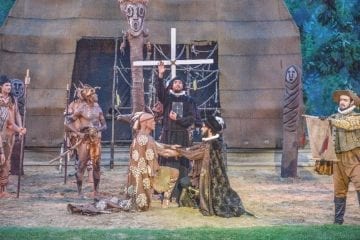 The Lost Colony outdoor drama is ready to launch its 82nd season with a preview performance on Thursday.

Presented by PNC, the 2019 season is under the direction of Ira David Wood III ,who is returning for his seventh season.

The cast and crew will perform a special Preview Night performance on Thursday, May 30. Tickets for Preview Night, and all other performances, are available now at www.thelostcolony.org.

The Lost Colony continues several traditions in 2019, including its “Dare Nights” performances for the residents of Dare County on June 7, 14, and 21. Dare County residents are encouraged to attend the performance — while continuing to help the Outer Banks food pantries.

Admission to the Dare Night performances is free for Dare County residents who attend and bring at least two canned goods or two dry goods as a donation for the Outer Banks food pantries.

For 2019, other Roanoke Island Historical Association productions include children’s show Wanda’s Monster, as well as Royal Tea — a meet-and-greet with the Queen herself.