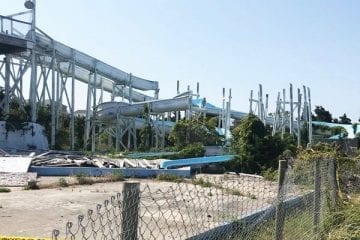 The old water slide will need to be demolished to comply. (Island Free Press)

A letter has been sent to the owners of the former Waterfall Park in Rodanthe declaring the property a nuisance and outlining what they need to do to comply with the law, according to Dare County Planning Director Donna Creef.

The 14.5 acre property was  popular during its heyday in the 1980s and 1990s, but closed after the national economic downturn in the late 2000s. By the time Hurricane Irene hit in 2011, the property had already started to fall into disrepair.

Since then, the county has been trying to deal with the problem, and the Rodanthe-Waves-Salvo Civic Association has made several attempts to buy the park, with a $1.6 million offer proposed in 2014.

This most recent step in the county’s efforts to clean up the island’s biggest eyesore includes a number of issues that need to be addressed for the former park to comply with the nuisance ordinance.

“On the soundside, there is a large basin full of water and weeds, which is a breeding ground for mosquitos,” Creef said. “Fencing to the park is breached in some areas, and there is construction debris, old tire … just piles of debris that need to be cleaned up.”

Dare County Planning Department staff and building inspectors tagged several structures as unsafe prior to sending the letter, and noted that there was evidence of people going into the park, based on recent graffiti on the bridge overpass by the old go-kart track.

The letter also calls for the demolition of the old water slides, as well as several other structures and former buildings.

“We have told them that they need to demolish some things. The remaining portions of the slide need to be taken down, as well as some of the buildings,” Creef.

“Typically (the owners) have 10 days to comply, but we recognize that it’s going to take more than 10 days to clean this up, and we’ve asked them to contact us and provide us with a corrective timetable of actions.”

Under the nuisance ordinance, the noted structures or buildings need to be demolished, or the owners need to submit a report from a structural engineer to get the structures up to compliance.

“[We] fully anticipate that they will be reluctant to comply with the nuisance ordinance based on past dealings with them,” Creef said.

Similar initiatives have been taken by Dare County in the past to address the widespread debris and deteriorating conditions of the former waterpark.

In June of 2014, County Manager Bobby Outten sent a letter to owner Ritsa Merjos of Virginia Beach stating that safety issues had not been resolved and that the property was not in compliance with county ordinances at that time. This resulted in some repairs, as well as the installation of fencing around the property.

“Similar actions have been taken before,” Creef said, “and they would get it to a point that was better than what it was. A couple years have passed, and now we’re back to where the nuisance ordinance is being invoked again.”

Some repairs that were previously conducted are also included in the list of items that need to be addressed, such as the compromised fencing.

“When we did the last proceeding, they had covered the wading pool at the bottom of the slide with plywood. That has deteriorated since then,” said Creef.

For now, the park is lined with yellow signs indicating the nuisance declaration, and a response from the owners has not yet been received.

“We need to propose some discussions on how to proceed,” said Creef. “10 days is not enough time, but at least we can get started within 30 days. We recognize that it’s going to take a concerted effort to get it cleaned up, and the owners live out of town, so we recognize that as well.”

Though the county has taken a big step forward to once again try to reduce the old park’s impact on the local landscape, it is not a situation that will be fixed overnight, or even in the immediate days and weeks to come.

“This is going to take a while to get resolved based on the extensive conditions that need to be addressed, as well as past experience with the family,” Creef said. “Is this going to be cleaned up by the end of June? Probably not, but we are working towards an appropriate resolution of the conditions out there.”