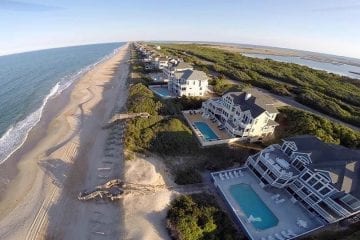 County Commissioner Paul Beaumont sought to assuage concerns during a May 30 public forum over a new proposal to strengthen dune protections by prohibiting most oceanfront accessory structures, including swimming pools.

The proposal, currently in the form of provisional text amendments to Currituck’s Unified Development Ordinance and Code of Ordinances, would limit permissible structures within a 60-foot oceanfront setback only to decks or gazebos no larger than 200 square feet.

Participants in the public forum expressed frustration at Currituck’s apparent inattention to the proposal’s effect on property values, as the current language could prohibit construction or substantial repair of many oceanfront pools.

Because additional regulations requiring placement of septic systems on the landward side of oceanfront lots would crowd out many nonconforming pools outside the setback footage, Currituck’s proposed ordinance could effectively eliminate many homeowners’ ability to have pools.

Currituck planning staff members were unable to answer questions about how many existing pools would be affected by the proposal, or by any alternate setback footages they considered.

Public attendees, including many area home builders, appeared to disagree with county officials as to whether existing regulations under the Coastal Area Management Act already prohibit many of the erosive construction practices the new ordinance is designed to address.

Stephen Nauss, a 20-year resident of Lighthouse Drive in Corolla, spoke to homeowners’ concerns about the process thus far: “If you don’t enforce existing regulations then you don’t have a leg to stand on. Obviously (the ordinance) would affect the valuation of the property, my rental income, and has a whole domino effect. I don’t think they’ve thought these things all through.”

Jay Overton, principal engineer and surveyor for Albemarle and Associates, an engineering firm heavily involved in oceanfront construction in the Outer Banks, spoke often during the forum to the necessity of protecting both dunes and properties by properly enforcing existing regulations.

“I am very encouraged with the county’s willingness to engage, listen, and work with the various stakeholders to explore enhanced means to protect our dunes while maintaining and protecting individual property rights”, Overton said in a statement.

“I appreciate the county’s efforts to make sure the dune is protected, but without more protections for property owners, and especially without grandfathering of existing structures, it’s going to be a big mess,” Peron said.

County planning staff said during the forum that they would try to gather information on the effect of the 60-foot setback and three shorter alternatives before the next public meeting on the issue.

Jenny Turner, a Currituck County planner, announced Wednesday via email to attendees at the May 30 forum that a work session on the issue with the Board of Commissioners has been tentatively scheduled for June 17 at 5:30 p.m.

To become codified and enforceable, the text amendments would have to be proposed again by planning staff for public comment as draft ordinances, reviewed by county counsel, and eventually approved in a vote by the Currituck County Board of Commissioners.