Shipwrecks: A new face in a growing family of restaurants 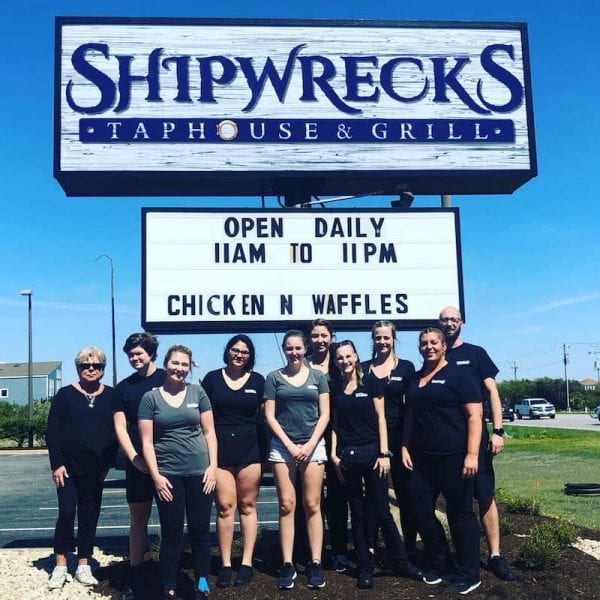 It’s been a banner year for new dining and entertainment experiences locally and Shipwrecks Taphouse and Grill is seeking to fill a needed niche.

Madalyn Roberts, marketing director of Barnyard Foods, which operates six other local restaurants, sat down with the Voice to talk about the new establishment, which opened in April.

“We really want people to know we are a lifestyle brand, meaning that we are not looking at just a restaurant, but we look at hospitality as an experience that is meant to be enjoyed to make memories,” Roberts said.

Beaman Hines is the president and CEO of Barnyard Foods, and his restaurant bona fides are well-established.

Sandtrap Tavern at Sea Scape Golf Links in Kitty Hawk is already established as a locals’ hangout and a “hidden gem” among visitors in-the-know.

Hines’ roots run deep on the Outer Banks as a resident as well as in the restaurant business. 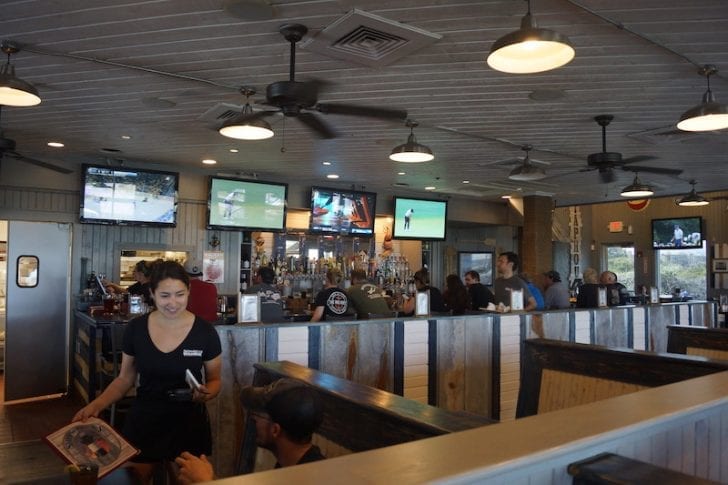 The interior colors and decor bring to mind the inside of an old ship.

His father is a Kitty Hawk native and has had family in Kitty Hawk and its environs for over 200 years. His mother is a Stumpy Point native and her family roots in that area also go back two centuries.

Beaman Hines was born in Stumpy Point and grew up there until he was 12 years old.

His grandparents owned and operated the only grocery store in Stumpy Point. His grandmother Louise Hooper and grandfather Jasper Hooper had owned the store since the 1900s and it was named Hooper and Son Grocery & Grill

Hines’ nanny ran the grocery store with the help of his mother. Beaman grew up in the kitchen watching and working with them until he was about 10.

Beaman’s work ethic came from his family and watching them in the industry.

Beaman’s grandfather was a commercial fisherman by day, ran the grocery in the evening and was also in the petroleum industry for over 30 years.

As a kid, Beaman would catch fish in the sound behind Stumpy Point. His nanny and mother would show him how to clean and cook on the grill.

Roberts, who came on board with Barnyard last year, has been working on rebranding each restaurant and Shipwrecks will be the beneficiary of that on-going evolution.

The establishment has fielded a solid team in putting a destination venue together.

The design was handled by Dianne Fisher, a local interior designer who has been the driving force in all of Barnyard’s restaurants and had the chance with Shipwrecks to work with a completely clean slate since the entire dining area was gutted and remodeled.

Donna Barber, with 16 years’ experience at North Banks Corolla, and Jim Smith, who was the head chef at Mama Kwan’s for a decade, round out the team.

Roberts hails from Chapel Hill and has worked in all aspects of the restaurant business, including mixology, which will play an important role in Shipwrecks goal to be a trendy destination that will focus on classic food and drink fused with southern, coastal and island-themed menu choices. 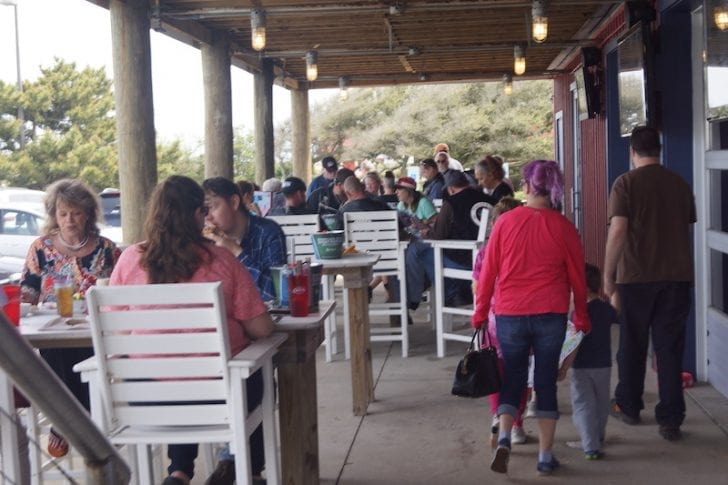 Outside dining has proven a popular choice for locals and visitors.

“We’re introducing a touch of vintage in each of our restaurants. For example, Sandtrap has a Kennedy beach, Nantucket type casual atmosphere. Simply Southern follows the progression of southern cooking and lifestyles from colonial times to your mother’s recipes, while Sooey’s evokes a smoking gun, Grateful Dead, Johnny Cash atmosphere,” Roberts said.

“Even the beer and cocktails in each restaurant reflect the theme and vibe we’re trying to convey.”

For Shipwrecks, that touch of vintage will focus on the area’s nautical history as the “Graveyard of the Atlantic.”

Roberts notes that the majority of the hundreds of shipwrecks off the Outer Banks coast are “conjunctive in the area of the Bodie Island lighthouse” and that is why the iconic structure was incorporated into the logo.

But the imagery doesn’t stop there.

The inside of the restaurant has been completed remodeled. In keeping with the shipwreck theme, patrons will we be greeted by “distressed metal, whitewashed walls, rough sanded floors, and cool tables with so many different shades of blues, you’ll be floored. It’s like entering the inside of an old ship,” Roberts notes.

The emphasis on fun and family permeates the Shipwrecks theme.

“We have a backyard that is even larger than the Brewing Station’s and it’s a never-been-used blank slate for us to play with,” Roberts related.

They plan an “America’s Backyard” theme for the area, with a deck bar featuring concerts and other events, another bar that will extend into a cornhole playing area (and perhaps other outside sports) and plenty of room for families to eat and play.

The inside bar is all new and will focus on old favorites as well as trendier cocktails, beach-themed drinks, and 22 taps for everything from the latest microbrews to good, old-fashioned PBR.

Of course, food is what drives a successful Outer Banks establishment and Shipwreck’s promises to deliver something for everyone.

“Everyone here is a foodie, and we especially love pairings,” Roberts said, meaning there will be a connection between menu and beverage offerings. 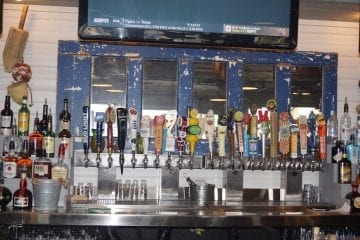 While some Sunday brunches are planned for upcoming events, a breakfast menu will be a possible future expansion.

For now, the focus is on lunch and dinner and Chef Smith’s menu won’t disappoint.

How does Smoked Rockfish Crab Dip or Duck egg rolls sound as an appetizer?

Mains will include all manner of steamer pots; shrimp, crab legs, oysters, low country boils — available to-go or at the table.

If your tastes run to landlubber’s fare, a Jalapeno Maple Glazed roasted duck can’t miss, and the ultimate comfort food takes on a Shipwreck twist with the USS Monitor Mac & Cheese. We’ll save the details for you to experience, but the dish comes with enough choices for free toppings to sink the Monitor by themselves, and upgrades promise to turn the dish into a gourmet’s delight.

There will be all the usual shell and finfish offerings, with specials source locally upon seasonal availability and offered baked, broiled or deep-fried.

Chicken, steaks and burgers, including a build-your-own-bison burger, round out the menu.

During the day and early evening, Shipwrecks will be geared to a family-friendly, fun atmosphere where people can simply eat, hang out and enjoy the experience.

They are working with a number of local musicians, bands and other production companies to provide entertainment.

Late-night entertainment will also be on tap once the dinner crowd wanes, but the emphasis will be on a fun and safe experience in keeping with the overall theme of Shipwrecks.

The place has been packed since its opening, especially on weekends and it looks like it has already fit into the northern beach scene as a place to dine and relax.