Lighthouse move: 20 years ago, skeptics said it couldn’t be done 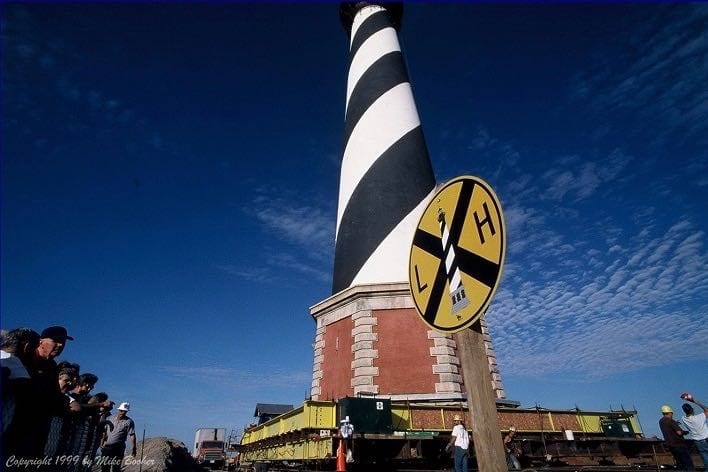 The lighthouse near an intersection during the move. (Michael Booher)

On June 17, 1999, the Cape Hatteras Lighthouse began a journey instead of guiding one.

Over 23 days, the beacon was relocated 2,900 feet inland, where it stands today, away from the threat of the encroaching Atlantic.

When the lighthouse was completed in 1870, it was 1,500 feet from the ocean. But after a century of tides washing over the island, moving sand from oceanside to soundside, just 120 feet separated it from the surf.

In 1980, the National Park Service started planning for long-term protection. The park service began a three-year public input process and in 1987, reached out the National Academy of Sciences, which submitted a report recommending moving the lighthouse as the most cost-effective protection, according to the Park Service.

The move was debated for years. Then, in 1996, North Carolina State University reviewed the report and then produced its own, Saving the Cape Hatteras Lighthouse from the Sea, in January 1997, also recommending moving the lighthouse. Funding was appropriated by Congress in fiscal year 1998.

In early 1999 before the lighthouse was moved, the principal keeper’s quarters, double keepers’ quarters, oil house, cisterns and sidewalks were relocated, with all the buildings placed in the same relative position as they were originally.

Robert Woody was a park ranger during the time of the move and is to speak during the celebration July 1.

“What I remember most about the Cape Hatteras Lighthouse move is the people involved, from the planners and engineers, to the people who did the hard lifting for the project on a daily basis, to the volunteers and rangers that stood with the visitors who came to see ‘the lighthouse move,’ making sure that they were safe and informed about what was happening when it was happening,” Woody told Coastal Review Online.

He said that the workers “seemed to sense that this was special, that they were involved in something historic, that they were becoming part of the legacy of the Cape Hatteras Lighthouse beyond themselves, but on a state and national level.”

The National Park Service will celebrate the 20th anniversary of the historic move from 9:30 to 11:30 a.m. July 1 on the Cape Hatteras Lighthouse grounds.

The celebration will include speakers, a panel discussion, artifacts from the lighthouse move, expanded interpretive ranger talks, activities for children and lighthouse climbs that are free of charge.

The event is a collaborative effort of the park service and the nonprofit Outer Banks Lighthouse Society and Outer Banks Forever.

The relocation also provided an excellent opportunity to highlight historic preservation and the problem of coastal erosion, he said.

“The project occurred during the early years of the Internet and was made available through its use, not just to those who came to the seashore to see what was happening, but to all nationwide who had access to the Internet,” he said.

There was a great deal of planning, Woody recalled.

“I would estimate that planning and coordination took about eight years until it all came together with the appropriations in the 1997-1998 fiscal years,” he said.

Planning began immediately after the National Park Service received the results of the 1988 National Academy of Sciences report, which originally explored 10 options to preserve the lighthouse. The state reviewed the options and, finding agreement with the academy, the park service opted to move the lighthouse.

To orchestrate the move, Woody said, they had to follow the bidding process, select a contractor, review their proposal for the move and go through several stages of planning, compliance and policy reviews with the engineers, planners and designers at the park service’s Denver Service Center and with the regional office in Atlanta.

Woody added that the $12 million needed for the project didn’t come with the decision to move but had to be appropriated by Congress, which took several years in itself. 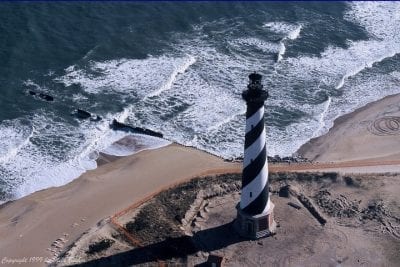 The Cape Hatteras Lighthouse before it was moved. (Michael Booher)

John M. Havel of Salvo has been researching the Cape Hatteras Lighthouse since 2003, was the first to build an accurate scale model of the lighthouse and then to write a “complete and accurate history of (one of) the most recognized, photographed lighthouses in America, which I am still researching and writing,” he told Coastal Review Online in an email.

He attended the 10th anniversary event in 2009, when he said he met many folks involved in the move. Since then, those contacts have shared with Havel “stories, artifacts, and (seriously) thousands of photographs taken of the move with me.”

From an historical perspective, moving the lighthouse saved the “magnificent architectural monument” for many generations to come to appreciate, to climb, to photograph and to marvel, but from the perspective of human achievement and engineering, “it is remarkable how ‘easily’ it was moved.”

“I personally know at least three locals — and there were many, many more — that would have sworn on their parents’ graves that the lighthouse was certain to break apart and crumble once they tried to lift or move it. In actual fact, the brilliant and brave men and women that planned and executed this feat had no qualms at all,” Havel said.

“Using simple mechanics and engineering they separated the 4,000- to 5,000-ton lighthouse from its base, lifted it into the air, and then pushed and rolled it half a mile southwest and out of harm’s way,” Havel explained.

“Once lifted, the move took just 23 days, and then it was gently lowered onto its new foundation, where it now stands, safe and secure. Records, instruments and photographs show that not one out of the 1,250,000 bricks was cracked or broken during the move.”

To move the 198-foot tall structure from its 130-year-old granite and rubble foundation took more than clever engineering.

“Ironworkers, stone masons, bricklayers, welders, carpenters, surveyors and hundreds of laborers spent months of hard work to accomplish this monumental task. Those men and women should not be forgotten,” Havel said.

“They worked to preserve a grand symbol of the islanders and their families that lived here 100 and more years ago, and those same families and generations to whom the lighthouse meant life or death on this fragile ribbon of sand.”

The lighhouse was pushed along mats by hydraulic plungers. The mats were hopscotched from behind the beacon to the front as the move progressed.

Havel said that of the community and its leaders, about half were solidly against the move, including filing lawsuits, protesting and threatening proponents.

Now, 20 years later, there are few residents still upset about the move but after seeing the lighthouse safely moved and opened for climbing once again, “many of the naysayers changed their opinions and are now happy — or at least accepting — that moving it was the right thing to do,” Havel said.

Visitors to the park from now through Oct. 14 can meet with rangers for daily interpretive programs. Through July 9, the anniversary of the 23-day lighthouse move, expanded interpretive programming will take place on the grounds of Cape Hatteras Light Station.

How the lighthouse was moved

From the National Park Service

The decision to relocate the Cape Hatteras Light Station was a sound public policy decision based on the best science and engineering information available. International Chimney Corp. of Buffalo, New York was awarded the contract to move the lighthouse, assisted, among other contractors, by Expert House Movers of Maryland.

In simple terms, the concept of moving the 4,830-ton structure consisted of lifting it off its foundation, transferring the load to a transport system, moving the tower along a prepared move route, and installing it on the new foundation.

To accomplish this feat, the original foundation down to the pine timbers was replaced by temporary shoring beams and supports. Then a steel beam mat was inserted over the timber mat with temporary posts on top.

After all jacks were shored, using oak cribbing, the system was pressurized and the jacks began lifting. At each lift level, jacks were retracted and shored up in sequence and the system lifted again to 6 feet. At this point it was ready to roll.

After it was lifted, the tower moved along to its new location 2,900 feet to the southwest on steel mats starting on June 17, 1999. Steel track beams became rails and roller dollies permitted the support frame to move along the track.

Three zones of hydraulic jacks kept the lighthouse aligned. Push jacks, clamped to the track pulled the frame forward 5 feet at a time. The lighthouse was equipped with sixty automated sensors to measure the transfer of the load, tilt, vibration, and shaft diameter. A weather station was installed at the top to monitor wind speed and temperature.