Max’s Pizza: New digs are a win-win for owners and patrons 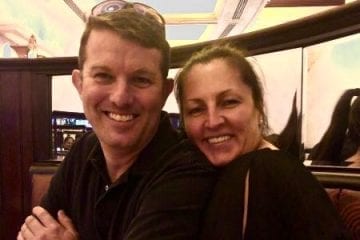 Fans of Max’s Pizza who have been missing their lasagna and excellent pies, we have some good news.

Max’s is back at a new location that sports a larger, more appealing dining area replete with a bar, a huge kitchen and an expanded menu.

When we first interviewed owners Grant and Natalya Sharp in 2014, Grant had dreams of expanding Max’s menu and dining area.

But the smallish unit they rented in a Kitty Hawk strip center presented a challenge to adding tables or kitchen space.

Still, opportunity sometimes comes in unexpected ways, and when a series of events led the Sharps to look for new digs, they came upon the perfect unit at the Belk Center in Kill Devil Hills.

Longtime Outer Banks residents and visitors will remember the unit as the original home of the Good Life Café. The popular Café Franco and the short-lived Crazy Iguana followed, but the unit is now home to the well-established Max’s Pizza, now formally known as Max’s Authentic New York Stone Oven Pizza & Italian Restaurant.

Five years have passed since we last interviewed the Sharps, so it seems appropriate to recap the resume of Grant Sharp, the man behind the scenes in the kitchen, lifted from our original review of the eatery.

Sharp comes to the kitchen with some impressive street cred. For starters, he is an honor graduate of Le Cordon Bleu in Paris. He mentored under Marcel Desaulinier (founder of The Trellis in Williamsburg) and participated with him in James Beard Foundation projects.

He was also one of three chefs at Meridian 42, a highly acclaimed Southern Shores eatery that sadly closed its doors several years ago.

And he spent six years as a consultant to restaurants for Sysco Foods, which provided keen insight on menu choices, marketing and the business side of running a restaurant.

Grant learned his pizza-making skills while working at the popular Virginia chain known as Anna’s Pizza, located in several cities and towns in Virginia’s Peninsula region. The owners of Anna’s were trained at Lombardi’s in New York City, credited as the first licensed pizzeria in the United States, opening in the 1890s and licensed in 1907. 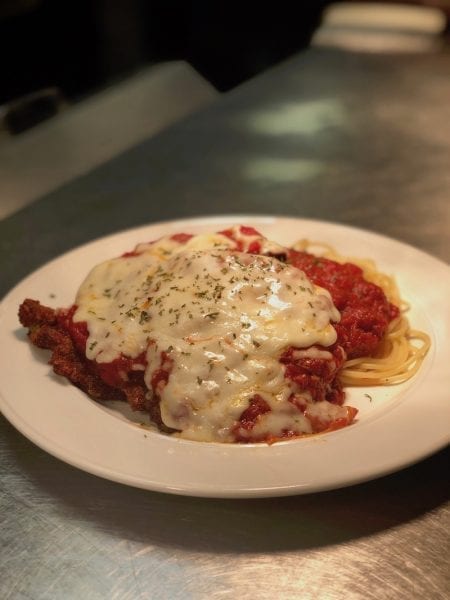 In our original interview, Sharp expressed his desire for a better pizza oven and a larger kitchen so he could expand his other Italian offerings, which at the time included subs, an excellent lasagna, and some other pasta dishes.

The couple moved fast when the opportunity arose, literally moving equipment and supplies from the old location to the new and remodeling the interior in less than three months.

Two weekends ago, they conducted a soft-opening, but the word got out and almost every seat was taken when we arrived with another couple in tow.

We were immediately struck at the big changes from the older location.

A large bar is a welcome addition where parties can wait for a seat to open or eat at the bar. Locals will likely make good use of the bar for quicker service and a place to socialize.

A much expanded waiting area has also been added, large enough for parties to order a drink and gather if they need to wait for a table.

Currently Max’s offers only wine and beer, but there is a nice selection of craft and traditional beers and the wine list complements the cuisine and much to our delight, offers several wines from Sanctuary Vineyards in Jarvisburg, the Outer Banks’ only local vineyard and winery that is offering up some superb red and white wines worthy of exploration. 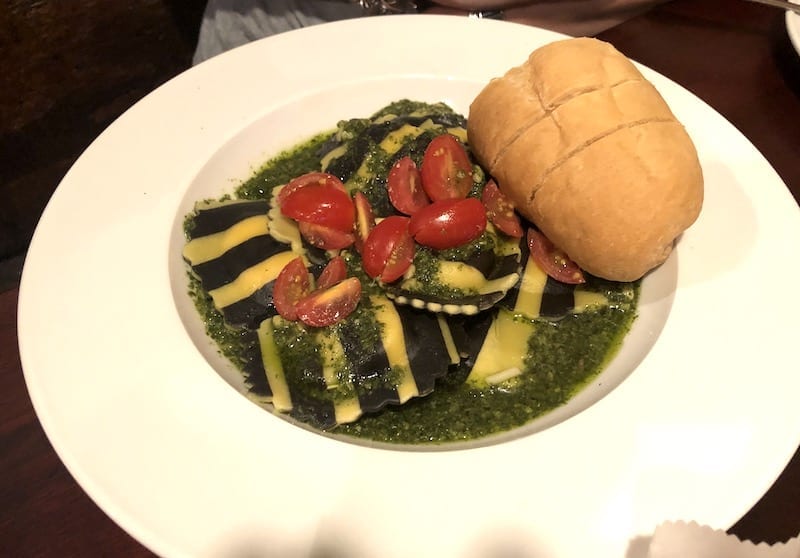 Ravioli stuffed with lobster in a pesto sauce

Natalya Sharp says a full-service bar with cocktails will be added at some future date.

You’ll often find Natalya in the front end, where she greets patrons and makes friends. Locals know her well and she recognizes repeat customers after only a few visits, making one feel right at home as a regular.

Our foursome took full advantage of the menu, ordering two old favorites — pizza and the lasagna, and one new special — a lobster-stuffed ravioli bathed in a pesto sauce.

We’ll start with pizza. If you loved it before you’ll love it now. From the King Arthur Flour (non-GMO) to the Stanislaus tomatoes to make the sauce and the sausage and pepperoni that comes in its original casings as it is cut by hand, this is a true New York-style pizza that bursts the flavor, is lightly crisp and foldable for eating on the run.

The lasagna has always been a favorite, with generous portions of meat, fresh cheeses, and a lovely sauce. I had a hard time debating between the pizza and the lasagna, but I was glad I ordered the lasagna (and, I snuck back a few days later when my wife had a dinner meeting and ordered an entire pizza for myself!).

But the surprise of the night was the lobster ravioli. A collective ‘Wow!” was the consensus opinion based upon the ample portions of lobster stuffed into a delicious pasta and a really tasty pesto that kicked the entire dish up a notch.

To get a feel for the menu, pasta dishes (choice of spaghetti, penne, capellini or linguine) are $10.99 with a choice of homemade meatballs, house roasted sweet Italian sausage or meat sauce), Chicken Parmigiana is priced at $14.99, and Fettuccine Alfredo starts at $13.99. 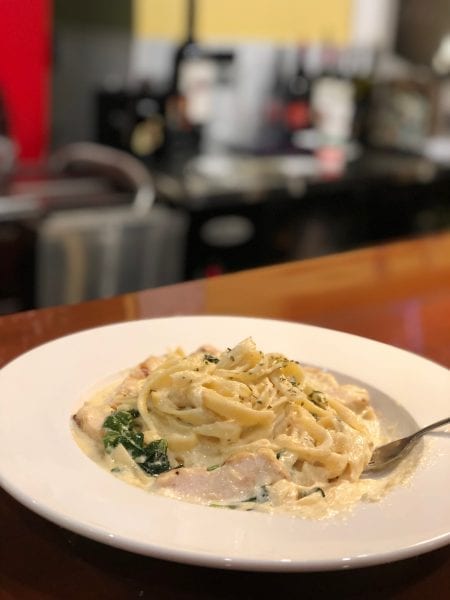 Other dishes include Veal Parmigiana ($15.99), Linguine with Clam Sauce ($17.99), Eggplant Parmigiana ($12.99) and the aforementioned Homemade Four Cheese & Meat Lasagna ($13.99). Homemade manicotti checks in at $11.99 and ravioli dishes change daily and are market priced based upon ingredients.

A wide selection of hot oven subs, an increasingly hard-to-find item with the proliferation of chain sub shops that heat, rather than oven-toasted subs range from $8.99 to $9.99 for 7” subs and $11.99 to $13.99 for foot-long behemoths. The usual deli meat subs are offered as well as Philly Cheesesteak, a variety of Parmigiana subs and a chicken fillet.

Three paninis are on the menu at present priced at $8.99.

Pizza is served by the slice or in 14-inch and 16-inch sizes. Slices start at $2.25, 14-inch pizzas at $12.99 and the large pizza is $15.99. Toppings are extra. Stromboli is similarly priced and the final cost varies depending upon the ingredients chosen.

A number of specialty pizzas are offered in both sizes and range in price from $16.99 to $22.99 depending upon size and style. 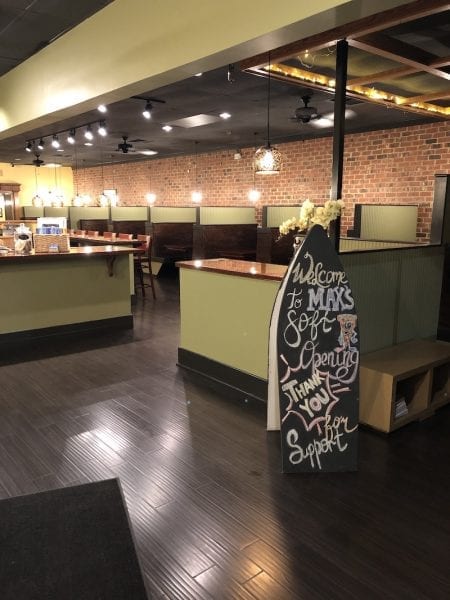 Hours are Tuesday to Sunday (closed Mondays) from 11 a.m. to 9 p.m. serving lunch and dinner.

They are located at 1712 North Croatan Highway at the 6¾ Milepost at the southern end of the Belk Shopping Center.

The menu and other information are available at www.maxspizzaobx.com  or you can call them at 252-261-3113.

Grant and Natalya have told us the summer menu is largely based on their past menu at the older location but they let us in on a little secret—in the fall when the busy season slows down, expect to see an expanded offering of Italian entrees on the menu.

We can hardly wait! In the meantime, take advantage of the new location. You won’t be disappointed.