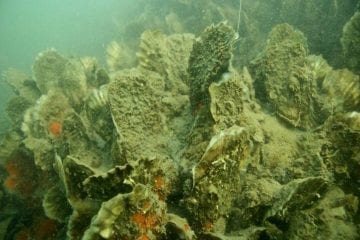 Oysters in a Pamlico Sound sanctuary. The bill includes establishment of three shellfish leases in the sound. (Division of Marine Fisheries)

In a recent interview, Steve Murphey, director of the Department of Environmental Quality’s Division of Marine Fisheries, said planning had started for implementing the bill, which was drafted at the division’s request.

The division is the lead agency for major initiatives in the bill, including the determination of locations and rules for new shellfish enterprise areas and the establishment of three large-scale shellfish leases in Pamlico Sound.

The enterprise areas proved to be one of the key reasons why this year’s effort on aquaculture was successful. The areas will be established for shellfish leasing ahead of time and are to have a faster, more streamlined permitting process. Murphey said the initiatives are intended to reduce potential conflicts with other users of public trust waters and reduce legal fights over leases.

“We have areas of the state where you can apply for a lease and there’s a public hearing and nobody shows up, but we have other areas of the state, particularly with these intensive and water column methods, where as soon as we receive the application we know we’re going to have a lot of conflict,” Murphey said. “Everybody has due process rights in this and so often times we’re in a situation where, regardless of what we do, we end up in court.”

The program mirrors those in several other states, he said, including Florida, where nearly all the state’s shellfish leases are in enterprise areas.

The new legislation allows the creation of “one or more” enterprise areas. Murphey said the division plans to identify potential areas and then hold meetings with local stakeholders, including property owners, commercial and recreational fishing operations, tourism interests and county and municipal planning departments, to work through concerns. The sites would likely be about 20 to 40 acres and the leases could range between small, 1- or 2-acre parcels and the current maximum lease size of 10 acres.

Bogue Sound, where the division and National Marine Fisheries are developing a spatial planning analysis to identify potential areas, is a likely location for one of the first sites, but don’t expect anything to happen quickly. The new legislation includes a moratorium for both Bogue Sound and much of New Hanover County, areas where there are both a lot of lease requests and the most potential for conflicts with other users.

“We’re not going to rush this,” Murphey said. “We want to take it kind of slow because we want to get it right.”

Once identified, the division would also hold public meetings on the enterprise areas. Once set up, the division would become the leaseholder and would subdivide the area through an application process. Unlike the current lease system, which allows the leases to be traded or passed on to heirs like property, the enterprise area leases would revert to the state once the holder stops operations.

“If you got on the lease and you got a couple of acres and you decided that wasn’t for you or too much work, or you couldn’t make production (goals) or couldn’t pay the rent, then it would revert back to the state,” he said. “Then we would go back to the queue and pull another applicant up, look at a management plan and put them into that.”

One of the main ideas behind the plan is to create a faster, simpler way for people interested in aquaculture to get started, but for the division, the new plan would lead to a more efficient and less contentious process.

Murphey said the change is also needed to keep up with a growing demand for leases. When he first started working with the division as a marine biologist in the late 1980s, it would get requests for 10 to 12 leases a year. Most of those were for growing clams.

While the potential conflicts with other users was part of the objections over last year’s failed aquaculture legislation, the biggest hitch was over the size of the leases.

An early version of the bill, aimed at attracting large producers, envisioned leases of 2,000 acres. In response to objections, that was reduced to 200 acres, but even that size drew strong objections.

This year’s bill includes a scaled-down pilot project in Pamlico Sound with three, 50-acre leases. Murphey calls it a “toe in the water” approach. He said finding the right location for the large leases will take one to two years. They can’t be in places with a lot of wave energy and they can’t be so remote that it takes a lot of time and fuel to get out and monitor them.

The division would carefully review business plans to make sure those interested are willing to make the kind of investment needed for such a large-scale lease.

The bill also gives the division authorization to allow shellfish growers to use waters currently off limits to grow seed oysters through the early part of their life cycle and then transport them to approved shellfish waters.

Murphey said the division asked for the authorization, which would allow for floating upweller systems, a platform known in the trade as a FLUPSY, to be located closer to a grower’s home base.

He said most growers like to use the systems in marinas because they are protected areas with access to electricity for the pumps, but under North Carolina law, marinas are automatically off limits for shellfish cultivation.

The change would allow more growers to use the systems to start their oysters, which is far cheaper than buying them at sizes large enough to survive in the standard beds. He said the division determined that the oysters would spend enough of their life cycle in approved shellfish waters to negate any effect from starting out in prohibited waters that are off limits.

The systems would be reviewed on a case-by-case basis to make sure the waters in the area don’t have toxic substances or heavy metals. If authorized, growers would be required to transplant the oysters before they reach more than 25 millimeters or roughly 1 inch in size.

“This is just for seed,” he said. “That way by the time they grow out, they’re not going to have any deleterious substances.”