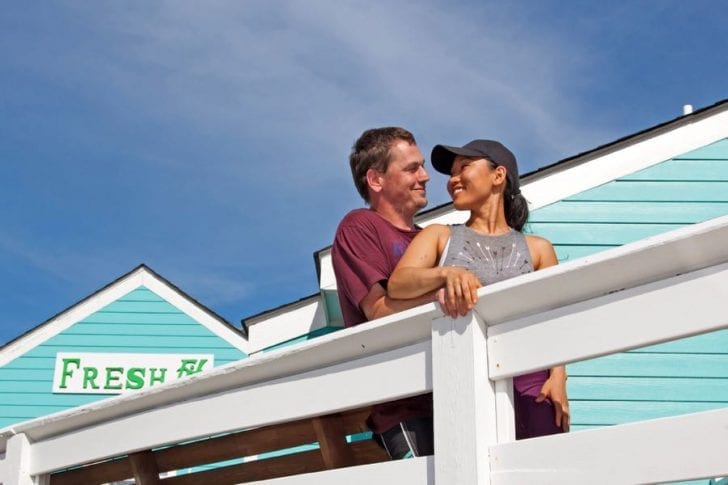 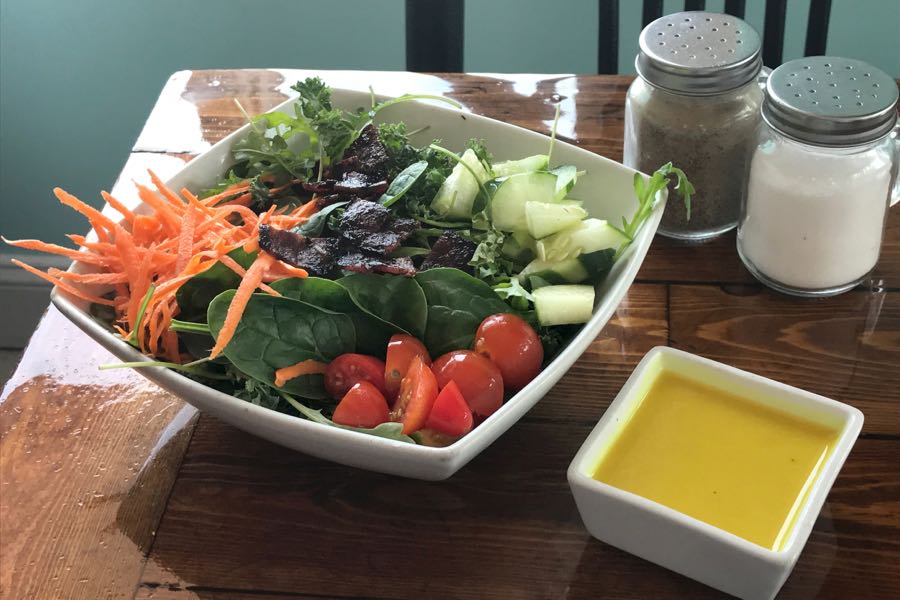 House Salad with lemon tahini dressing on the side.

Your results may vary, but after enjoying a Buddha Bowl at Fresh Fit, I felt energetic and light enough on my feet to take a 2.5-mile walk. Lunch normally has me fighting off the urge to nap. Maybe there’s something to this health food stuff?

Owners Steven and Tungaa Gawlinski opened Freshfit Café with the aim to offer fresh, balanced meals that help people meet their health goals. At the Voice, we celebrate more health-conscious offerings that are happening locally. It is also good to see our more established eateries expand their menus to embrace vegetarian and vegan diets.

With Freshfit’s first year almost complete (they opened in August last year), they are fitting into the new Outer Banks restaurant scene.

So how did a refrigeration technician and a country girl from Mongolia come together to the Outer Banks’ newest health-focused restaurant and juice bar? Glad you asked.

Working two jobs is common around here. Roanoke Island native Steven Gawlinski was by day a commercial refrigeration technician and by night a restaurant worker. Munkhtundalag “Tungaa” Ganzorig, here from Mongolia on a international work visa, was likewise burning the candle, juggling cooking duties at a pair of local restaurants.

Nine years ago, the two met at Big Al’s and before long they were an item. After a courtship here, Tungaa returned to her home in Mongolia. Steven wanted to marry, but Tungaa was sure her father would never agree to it. He told Tungaa he’d fly over to meet the family and explain his intentions to her father. Tungaa said, “But I didn’t believe it!”

One Valentine’s Day, after two days travel, including 18 hours of flight time, Steven arrived in Ulaanbaatar, Mongolia’s capital city. He called Tungaa from the airport, saying, “Hey, I’m here, come pick me up.” 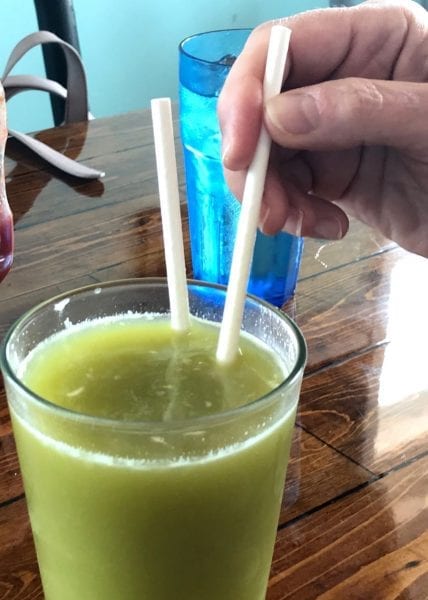 he “Ph Balance.” A blend of apple, cucumber, lemon and pineapple juice extractions.

Tungaa introduced Steven to her family, translating for him to her father that Steven was there to ask for her hand in marriage. Apparently appreciating the lengths to which Steven went, he said yes. The couple will share their second anniversary this July.

However, the lifestyle was causing the pair to have health issues. Tungaa has to be careful with food allergies and the crazy pace was working against them.

“What made us change? Working two jobs you have to eat when you can,” said Steven. Fast choices are not always the healthiest.

Both feeling less than in their top forms, they started working out together at home and cut out the bad food. This new regimen took hold and they began to seriously plan their meals around balanced nutrition. The plan worked. He lost 65 pounds and she shed 40.

Then they arrived at an idea. Steven said, “How about we start offering these kinds of meals?” A place of their own would give the couple more time together, and Tungaa could call her own shots as executive chef.

Finally establishing their base on the Manteo-Nags Head Causeway in the Gone Coastal shops, they began to create the Freshfit menu and rehabbing the space. The location is ideal, with views right on the Roanoke Sound with open-air dining when the weather is nice. Steven’s background in commercial refrigeration was a bonus when outfitting the kitchen’s coolers. Let’s say he made some real bargains.

Before hiring any outside staff, the Gawlinskis held a series of soft openings, inviting friends and family to sample their planned menus. Word began to spread.

Steven said, “Friends took pictures (of the dishes) with their phones, put them on Facebook.” It was a good tactic. The word began to spread. They opened in August of 2018.

The menu denotes whether items are gluten-free, vegetarian, vegan, or for the lactose intolerant. While geared for good health, the emphasis here is on using the freshest ingredients, locally sourced seafood, and preparing them in a tasty, balanced manner.

Tungaa said the problem people have when they diet is to become too restrictive in their choices. “Too much restriction is bad. You need the proteins, but you also need the greens and also the good fats.” 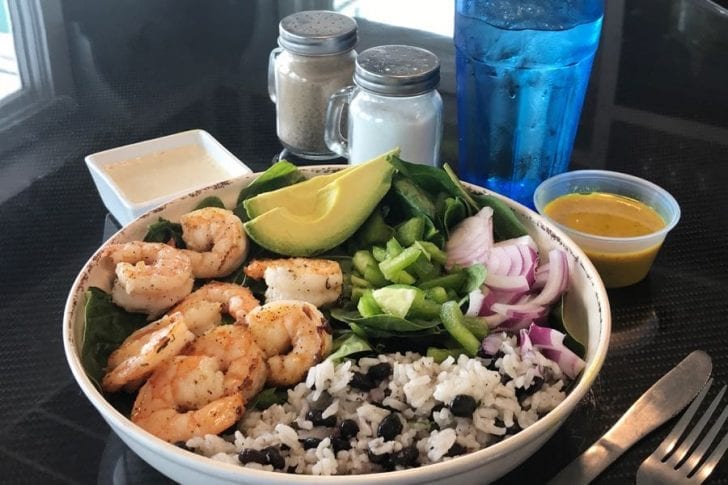 That may be why the Buddha Bowl is such a hit. Diners select a protein, greens and four other sides, including vegetables, grains, seeds and fruit. These are prepared and composed attractively and set off by your choice of avocado ranch, Balsamic or lemon tahini dressings.

I wanted to try more than one dressing and they were happy to oblige. I chose grilled shrimp (done perfectly) on baby spinach, raw onions and peppers (which I could have also order grilled) , and the very delicioushe black bean and rice salad. Both the avocado ranch and lemon tahini dressings are winners. Health food this delicious can help keep a person on track.

On a second visit we decided to split one of the fresh squeezed juices to start. Our “Ph Balance” combined apple, cucumber, lemon and pineapple. Felt like it did the job. 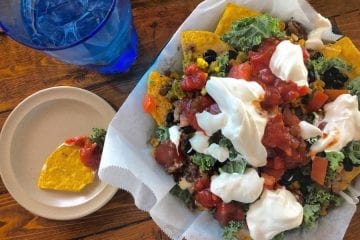 We also shared a heaping platter of nachos with baked corn chips lightly laced with cheese and studded with tomato, a tasty, not too spicy salsa, jalapenos, greens, and lean ground turkey. All about were daubs of tangy sour cream. We put a pretty big dent in it.

The my wife, being sensible, tucked into a house salad of greens, cucumbers, carrots and tomatoes and asked for a topping of turkey bacon. Apparently that is a thing. Who knew? Skinny people, that’s who.

I came for the Portobello mushroom burger. It arrived open-faced with baby spinach and a tomato slice on the cool side. The other half of the bun held the sliced avocado and the grilled mushroom cap, inverted cup-like, to hold the grilled peppers and onions and a very savory, even beefy-tasting bit of broth. This was a juicy burger. One must do a real forward crouch over the plate to keep the drippings from landing on one’s shirt. You can select a more familiar burger bun or add cheese for a $1.00 more for each.

The menu is quite extensive, particularly for a café of this size. Breakfast options include a variety of omelets, pancakes and toasts with a variety of toppings. A broad array of coffees, juices and smoothies round out one side of the menu. 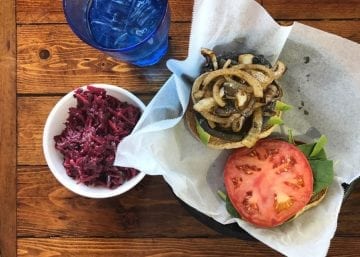 The very savory Portobello mushroom burger with a side of beet salad.

Lunch offers appetizers such as hummus, steamed shrimp, avocado dip and a selection of bruschetta and salads. Burgers, wraps and sandwiches and a wide offering of sides precede the afore mentioned Buddha bowl assortment.

No beef or pork dishes here, but the proteins at hand are plentiful. With the grilled chicken, shrimp, tuna, turkey, both ground and as bacon, and seared tofu on hand, you probably won’t miss them.

By the time this posts, beer, wine and spiked seltzers will be available, with an emphasis on North Carolina brands.

On the horizon, in July, they plan to extend their hours into the evening offing light dinner fare in tapas style of small plates.

At almost one year in, they are finding their way with an understanding that a strong local client foundation is importance to drawing visitors.

As Steven said, “You only get one chance to please a local.”