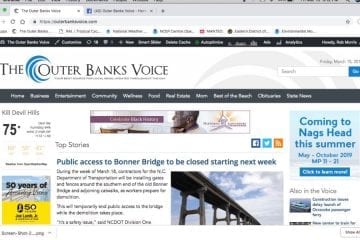 In an agreement between three prominent locally owned media companies, The Outer Banks Voice has been sold to Rick Loesch, owner of East Carolina Radio Inc. (ECRI), and Mark Jurkowitz, owner of the Outer Banks Sentinel.

The Outer Banks Voice, founded in 2010 by veteran Virginian-Pilot journalist Rob Morris and banker and blogger Russ Lay, is the leading news source on the Outer Banks. The online news outlet generates 7 million page views annually and has amassed a social media audience that includes almost 66,000 followers on Facebook as well as 10,100 on Twitter and 6,300 on Instagram.

The sale paves the way for the new owners to build on the Voice’s impressive success and reach in the Outer Banks community.

“We appreciate and admire the incredible value and legacy that Rob and Russ have created at the Voice,” said Jurkowitz. “The new team is honored and determined to continue to serve Voice readers with the best in local news coverage that matters to them.”

“Our partnership with Mark Jurkowitz of the Sentinel will help us move the Voice to the next level,” said Loesch.

The Voice’s founders expressed confidence in the new ownership team. “The Voice will be in the great hands with the Sentinel and East Carolina Radio,” Morris said. “We look forward to seeing them take it to the next level.”

“I am excited to leave the Outer Banks Voice in the hands of two well-established and highly respected media companies,” added Lay. “It was important to me that the Voice be left in the hands of local owners who live, work and play in the Outer Banks and who understand our business, civic and political dynamic. This sale will allow the Voice to grow and expand in ways we could not have accomplished or imagined on our own.”

As the area’s first online-online newspaper and the first one to be recognized by the North Carolina Press Association, the Voice has been featured among notable online startups nationwide in the Columbia Journalism Review and is regularly cited by state and national news organizations seeking accurate and up-to-date news from the region.

Before buying the Sentinel in 2014, Mark Jurkowitz was a long-time journalist who spent a decade at the Boston Globe and also served as associate director of the Journalism Project at the Pew Research Center in Washington, D.C.