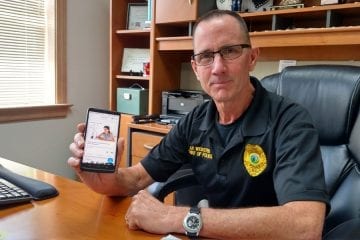 It is, according to Nags Head Police Chief Phil Webster, a significant technological step forward for the “community-oriented policing concept.” And, with an email blast on July 13, Webster introduced the community to the free Neighbors App that enables smart phone users to exchange real-time, local crime and safety information.

It “increases our ability to interact with our residents and takes that to a new level. It’s just another tool we can use to engage the public and become even more proactive,” Webster said. “Essentially, it’s a social media tool, like Facebook or Twitter.”

To download the Neighbors App, residents can text “NHNC” to 555888 from their smart phone (iOS or Android) or go to: https://shop.ring.com/pages/neighbors app. The app can be used to join a specific neighborhood, share crime and safety-related videos, photos and text posts, and receive real-time safety alerts from neighbors and local law enforcement. It was created by Ring Inc., a company owned by Amazon that manufactures a variety of home security products.

Webster has seen posts of videos of an unknown person coming up to a house, with a text asking if anyone knows the person. People can then post their comments, just as they would on Facebook. The police can make use of posts that are shared in a variety of ways by opening Ring’s Neighbors Portal, which provides alerts of crimes or potential crimes.

“Then we can reach out to the person who posted the video,” Webster said, “and request that they give us more information, including their name and location.” Users of the app, he added, are anonymous and only identified by a user number, which provides an additional benefit by allowing people to post videos without identifying themselves.

Another capability via the portal is pulling up a “heat map” showing clusters of people using the app. “For instance,” Webster explained, “say we’ve had some car break-ins in a neighborhood. Bringing up the heat map, we can draw a ‘geo-fence’ around that area, contact those people and ask them to review their video to see if they’ve picked up that activity. So the user is able to send us information and we’re able to send them information and make requests.”

By contrast, Webster said, before the police department partnered with Ring, town residents posted videos or photos on social media of crimes being committed or about to be committed, “and everybody posted comments about it – but no one called the police, so we were completely unaware of it.”

Webster said he first learned of the Neighbors App being used in Coral Gables, Florida. He said he kept the new technology in mind as he went through the process of applying to be the new chief in Nags Head. He was appointed to that position in February of this year.

When contacted, officials in some other Dare County municipalities indicated they were working on or with something similar.

Duck Police Chief John Cueto told the Sentinel his department has partnered with Axon Enterprises Inc. Among the programs being used is “Axon Citizen,” by which a citizen who has video of a crime or suspicious activity can call the Duck Police Department and be sent a link to send it to the police.

In August, Cueto said, he will ask the Duck Town Council to approve a five-year contract for “Axon Community.” Once approved, a link to this system will be posted on the town’s website, and residents will be able to post videos, photos and texts in “real time,” which will be stored immediately and available as evidence. The new program, will “integrate technologies to really create a virtual neighborhood block watch,” the chief said.

Kitty Hawk Police Chief Joel Johnson said his department is preparing to “take the next step and become a partner with Ring via its Neighbors App in an effort to promote greater communication with the people we serve.”

He added that, in the next several months, the department “will also be rolling out its Camera Registration Program, [which] allows residents and business owners to register the locations of their video surveillance systems with the Kitty Hawk Police Department. When a crime occurs, police will be able to identify the locations of nearby video cameras and enlist the assistance of the community to help officers collect video evidence and follow up on leads.”

Other municipal police departments in Dare County seem to be in the exploratory or early phases of this technology.

Kill Devil Hills Police Department Lieutenant W.D. Pierce told the Sentinel his department is “still in the learning phases of this new technology.”

Southern Shores Police Chief David Kole said his department is “reviewing a couple of different options for the fall.”