WHAT TO WATCH ON TV
Stream On: So much TV – so little time, part one 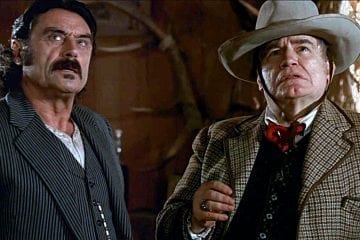 Back in the Day, you would turn on the TV and usually end up watching the least objectionable programming you could find. Times have surely changed; now we turn on the TV and find ourselves in the middle of the largest candy store in the world.

So, what’s to watch?

A simple search on the internet will bring up no end of scribes’ top-ten binge-able shows, but I’m going to go a little deeper and list some of my favorite lesser-known series in no particular order save for broad groupings by type.

My favorite, and so far the alpha and omega to me, multiple rewatchings of which are still yielding new delights, is Deadwood. The masterwork of one of the greatest TV writers, David Milch (who also created NYPD Blue, another top choice), it’s an exploration of how order comes from chaos, expressed here by the transformation of a 19th century Dakotas-territory gold mining camp into a “proper” city.

Milch took the historic characters as a starting point for his meditations and created a rich universe where the protagonist is a pragmatic scoundrel who ran the first Saloon in the mining camp and his cohort, which included Teddy Roosevelt’s best friend and Wild Bill Hickock; the main antagonist being George Hearst (father of William Randolph). The language the denizens used is King James Bible plus Shakespeare leavened with plenty of frontier profanity, on Milch’s notion of the two books that literate homes of the period were sure to own.

Deadwood can be streamed on HBO or Amazon Prime; a 2019 2-hour movie that wraps it up after its premature 2006 termination is available on HBO.

The next series that comes to mind is the criminally underrated The Killing,  a 4-season police procedural now available on Hulu and Amazon Prime. The drama begins with a missing teenager and turns into a study of addiction, political and press corruption, family, and the chaotic lives of the two protagonist Seattle detectives who catch the case. Those characters are brilliantly written, with good dogs and bad battling inside each, and you will miss them when the show is over.

The Killing is avilable on Hulu and Amazon Prime.

That reminds me of The Bridge. While The Killing was based on a Danish show, The Bridge (Bron/Broen) is an original Danish/Swedish series (with subtitles) about a crime discovered smack in the middle of the bridge between Denmark and Sweden that takes an unexpected turn upon investigation by another quirky pair of detectives, a big promiscuous teddy bear of a Danish detective and his full-on OCD Swedish counterpart. Here the characters and the plot are ingenious gems.

The Bridge can be seen on Hulu; an American remake was attempted, but the critics were not kind to it.

The very talented stars of  The Killing, Mireille Enos and Joel Kinnamon, are in a current Amazon Prime series called Hanna, which is nothing like their earlier gig, but entertaining enough that I am eagerly awaiting its second season. In a bit of nearly science fiction, the title character is a teenage girl, raised as an experiment by an off-book CIA group to be an assassin. She is rescued by her dissenting dad (Kinnamon) and sought by an operative from the aforementioned group (Enos).

Hanna I thought a bit broad at first, but the impeccable acting, good direction and ingenious plot, not to mention some terrific action set-pieces, had me before long. It’s about families, however they are formed, through blood or other means, and the attendant themes of loyalty and duty.

Next time I’ll begin with David Milch’s NYPD Blue and take off from there.