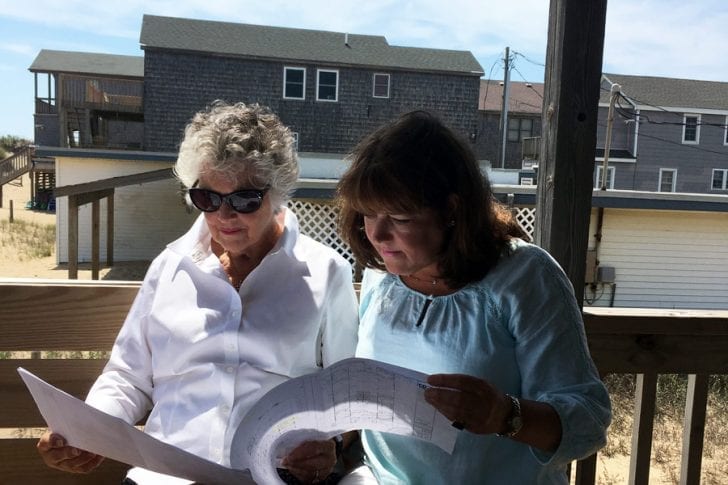 Betsy and Elizabeth Brothers worry about the impact of the project on their neighborhood. (Michelle Wagner)

As SAGA Realty & Construction works to secure environmental permits to proceed with plans to construct a 28-bedroom event home and two 24-bedroom structures along the Kill Devil Hills oceanfront, the town’s Board of Commissioners explored some steps to regulate the impact of mega-mansions at its Aug. 12 meeting.

At the request of Commissioner Mike Hogan, the board directed the town’s planning board to develop recommendations that would increase vegetative buffering between such structures, increase parking lot setbacks, require emergency access lanes and limit stacked parking to four vehicles.

“I feel like it’s the most concrete direction we’ve had,” Mayor Sheila Davies said of Hogan’s proposal.  “And we’ve been kicking this around for a year, so I am glad there is support from the board to see where we can go with this.”

The board is not considering, at least for now, enacting maximum square footage limits, a tool several neighboring communities have used in recent years following the state’s 2015 ruling that local governments could no longer regulate house sizes by limiting the number of bedrooms.

Davies said the board hasn’t moved in that direction because of the size of lots in Kill Devil Hills. “On the oceanfront, we have predominantly more of the longer, deeper lots than some of our neighboring towns, so that’s really factored into our concern of trying to standardize with one square footage allocation,” she said.

But for at least one resident at the Aug. 12 meeting, that rationale wasn’t enough.

“I find it really interesting that Kill Devil Hills has no limit,” said Betsy Brothers, whose family cottage was built in 1949 and is nestled in between the properties SAGA plans to develop at 1213, 1207 and 1209 S. Virginia Dare Trail. It’s one of a number of cottages on the stretch of beach that have been in families for five generations, she noted, adding that, “I think so many people would greatly appreciate that being addressed.”

SAGA, a major developer on the Outer Banks, has been the focus of controversy surrounding several of its recent projects, including two 12-bedroom homes on the Southern Shores oceanfront as well as a proposed hotel on Hatteras Island that has since been put on hold. SAGA could not be reached for comment for this story.

As for the Kill Devil Hills projects, the property at 1207 S. Virginia Dare Trail is home to the Powell/Stokes Cottage, built in 1941. It was designated a historic landmark and would be demolished to make way for the new construction. The adjacent lot, at 1209 S. Virginia Dare Trail, is vacant. SAGA is in the process of submitting revised plans to secure a Coastal Area Management Act (CAMA) permit for these two lots, according to Kill Devil Hills Zoning Administrator Donna Elliot.

Elliot said SAGA would likely receive its CAMA permit for the property at 1213 S. Virginia Dare Trail this week. CAMA permits are required in 20 North Carolina counties for projects that fall within areas of environmental concern. Acquiring the permits is the first step before seeking site plan approval and securing necessary building permits.

Elliot said SAGA already purchased that property, which sits to the south of the Brothers’ cottage and currently houses a modest, old-style flat top cottage. Plans submitted for the CAMA permit show a future four-story, 28-bedroom house at the site with 28 parking spaces, a two-story tiki bar and gazebo/chapel with seating capabilities for more than 100.

Several neighbors voiced concern to commissioners over the safety of such large structures and what they described as inadequate state building codes. They also asserted that such mega-homes will change the surrounding neighborhood as well as have a negative impact on rental value.

Martha Vaughan, whose family has owned a home just south of 1213 S. Virginia Dare Trail in the Edenton Colony cottage court since the 1940s, told commissioners she has sent letters to policy makers at the state level as well as the Southern Environmental Law Center, soliciting the watchdog group’s support in the matter.

Betsy Brothers’ daughter, Elizabeth Brothers, noted that the lack of state requirements for sprinkler systems in the large homes is of significant concern. “If one of these were to catch on fire and depending on the way the wind blows, our whole historic seventy-year-old neighborhood could really go down in flames,” she said.

In a later interview with the Voice, Elizabeth Brothers said that her family doesn’t have any objection to people putting up cottages. “What we object to is that it is allowed to put up these 28-bedroom mini-hotels in our historic neighborhood. It will completely change the quality of life for all of us.”