The Cookshak-The OBX finally has its own ‘chicken joint’ 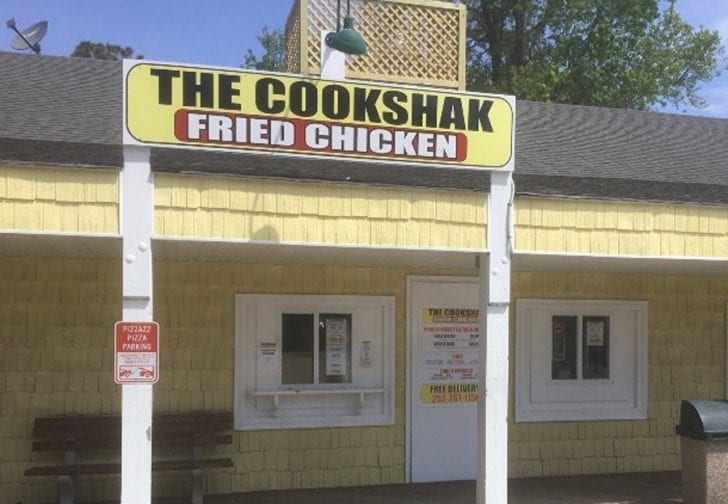 When it comes to food, the Outer Banks enjoys choices from two distinct culinary traditions.

As a coastal resort, seafood has always played a leading role with local as well as Caribbean themed dishes (a product of our surfing culture)  displaying the ocean’s bounty in myriad styles.

But we’re also a Southern town and for the most part, the local restaurant scene has incorporated regional staples as pork BBQ and ribs, chicken fried steak, North Carolina sausage, grits, cornbread, collards, and sweet tea into their offerings.

But one deeply Southern favorite—fried chicken–has played only a supporting role on local menus.

Go to almost any town in eastern North Carolina and if you don’t find a local ‘chicken joint’, you’ll likely find a Bojangles’ filling the void.

But the Outer Banks has lacked even a fast-food chain dedicated to the fried bird the band Southern Culture on the Skids celebrated in their song 8 Piece Box.

The Cookshak appeared on the local scene in May when they opened a location in Duck, followed by a second store in Nags Head that debuted in June.

After visiting The Cookshak twice and coming away impressed (and satiated) we contacted Rupert to get the story behind the new venture.

Pizzazz was started by his stepfather, Paul Ford in 1986 and Rupert migrated here in 1992 after college to help in the family business, managing Pizzazz’s Duck location.

Over the course of nine years, Rupert slowing acquired more shares of the business until he took over full ownership in 2011, allowing his stepfather and mother to begin to enjoy their retirement.

Born and raised in eastern Kentucky, Rupert relates that fried chicken was ubiquitous and along with his consumption of pizza in college, a common element in his food choices. 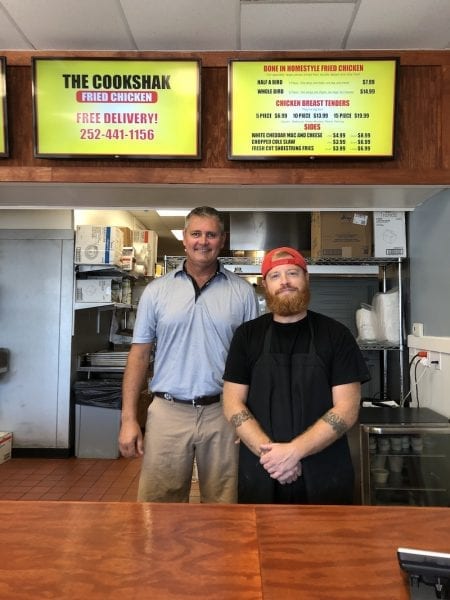 In fact, “Paul was also a big chicken lover and as we found success in pizza, he kept saying we needed to find a way to open a fried chicken joint in Duck,” Rupert said.

So the idea of adding fried chicken to the company’s operations was always in the background.

“But we focused on the pizza stores instead and as they and our ‘pizza family’ grew, the chicken store just didn’t happen,’ Rupert related.

But chicken continued to play a big role in Rupert’s family.

“Paul cooked fried chicken for my mom once a week,” Rupert notes.

Another family tradition where chicken played a role added to the impetus to move forward with a fried chicken-themed restaurant.

His sister and brother-in-law live in Tallahassee, where they own a large pine tree farm.

There’s a farmhouse on the property with a picnic shelter out back that everyone calls ‘the cookshack.’

Every Friday after Thanksgiving his sister and brother-in-law hold a large shindig featuring fried fish, shrimp, other seafood and chicken.

“I almost always worked the fryer at that event because I love doing it and after being there a few years, I told my wife I’d like something similar for our home in Currituck. I built one and we called it ‘The Cookshack 2’, so the evolution of the name was natural for the new restaurant,” Rupert notes.

He then used his stepfather’s recipes and his distributors provided some other recipes and Rupert began to experiment and tweak.

Ford passed away last year and at his memorial service Rupert fried chicken at his backyard cookshack in honor of Paul and the “response was phenomenal from the attendees,” he remembers.

It seemed as though everyone encouraged him to move forward on the ‘chicken joint’ idea.

As it turned out, space opened up in Pizzazz’s Duck location (Loblolly Pines Shops) and another became available in Nags Head next to the Pizzazz store at the Milepost 10.5 shopping center.

After discussions with his wife and assessing the strong management team and staff he had in place at Pizzazz, Rupert moved ahead on both stores, an admittedly ambitious project.

His district manager, Jimmy Reinhart is one of many Rupert has relied upon to help take on the challenge of opening two new stores in one year that also differs from the pizza offerings they’ve been accustomed to serving. 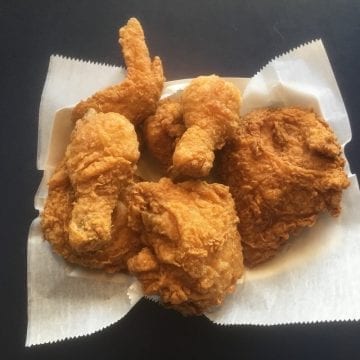 Rupert’s goal is to offer authentic Southern fried chicken with a unique flavor that would set his birds apart from the rest of the field.

The brining process avoids the popular technique of pickle-brined chicken (which is the method Chik-Fil-A uses), ‘not because I don’t like it, but because we wanted our own unique flavor,’ Rupert said.

The Cookshak’s brine has selected spices added and the chicken marinates from 12 to 18 hours.

Next came the batter and while they tried single-dipping the breading, they determined double-dipping the chicken added the crunchiness Rupert and Southern fried chicken aficionados crave. Rupert also tweaks the batter with spices to add more flavor to the finished product.

The chicken is all bone-in and the portions are more than generous.

“We set a minimum of a three-pound bird with our supplier and they are larger than what you’d find at local grocery stores or KFC. In fact, the breast is about the size of an adult hand,” Rupert explained.

Indeed, for most people used to eating a three-piece box at KFC, you’ll likely find The Cookshak’s two-piece offering won’t leave you hungry.

Rupert also says the brining keeps the chicken moist, something we can attest to as even the ample white-meat breasts are juicy right down to the bone.

After they settled on the final recipe, the entire process from the type of chicken purchased to spice recipes and brining and holding times were written into a book Rupert’s son, Reece, who helps run the Duck store, dubbed it ‘The Fryble.’.

Rupert has had a lot of fun and it’s brought back great memories of his family experiences with chicken.

“It’s given my staff something new to do, the food is complementary to what we already serve, and it’s a family-oriented and owned business that’s good for the beach and our customers with great food at a good price,” Rupert said.

He rejected ideas of adding fried fish or shrimp, determined to ‘keep it simple’ and focus on serving the best fried chicken on the beach, although as a nod to the kids menu, chicken tenders and mac & cheese, both of which had to meet Rupert’s standards, are on the menu along with fresh-cut fries.

And don’t let the word ‘spice’ worry you.

“We wanted to enhance the flavor but at a level that wouldn’t put off children. It’s very subtle and not hot at all. We aren’t serving a Cajun-style chicken here. For most people it’s more of a sensation you might notice after you’ve finished eating and trying to figure out why this chicken tastes different,” Rupert adds.

Both locations offer eat-in dining, although at Duck you’ll have to exit The Cookshak with your order and walk a few steps to Pizzazz to find a table. At Nags Head, they knocked out the wall that separated the two units and added an inside entrance to the table located in Pizzazz.

Even better, both stores deliver, a welcome addition to the (finally!) growing list of places that now bring food to your door. Nags Head visitors and residents will be particularly happy to see fried chicken added to the list of home-delivered food, which less than five years ago consisted of pizza places (some only seasonal and Chinese food.

Duck delivers from the Currituck county line in the north through Southern Shores at the southern end of their range. Nags Head will deliver from Colington Road to South Nags Head. They do not deliver to Colington east of the bypass but do deliver to westside subdivisions between Colington and Whalebone.

Of course, to-go is another option and fried chicken is just great food to pack for a family beach outing or any outdoor gathering.

In the fall they hope to add catering to their options