WHAT TO WATCH ON TV
Stream On: American turning points 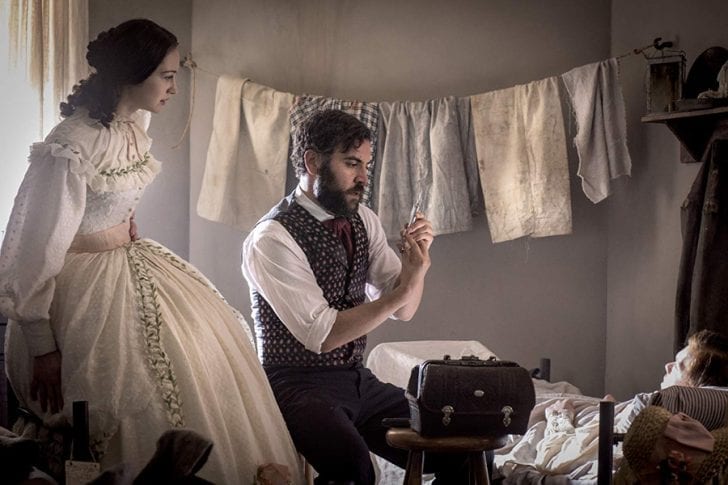 Confederate and Union civilians and soldiers were treated in the same hospital in the open city of Alexandria, Virginia, down the road from Mercy Street. (IMDB.com)

The history of our country provides countless stories fit for dramatization, stories that fill out lesser-known narratives, like our lesser-known streaming TV choices. These series take epochal figures and events and spin three worthy yarns.

In autumn 1776, colonial insurgents have declared war against the Crown. Following a successful naval landing, His Majesty’s Army has forced General Washington’s rebels into the wilderness. New York City serves as military base of operations for the British. The Loyalists of Long Island keep a vigilant watch for sympathizers and spies, notably Abe Woodhull, a Long Island farmer who becomes embroiled in espionage against his peers, which include his father, a local magistrate.

The surprisingly complex politics and loyalties of the Revolutionary War are given a thorough airing, through the depictions of private Colonial regiments, British rebel sympathizers, and the regular armies and foreign actors who worked for both sides of the fray.

The 2014-2017 series was based on Alexander Rose’s history of the Culper spy ring in Colonial New York, and included as characters the historical figures of Woodhull, his friend, veteran of the French and Indian War and leader of his own regiment of Royalist Rangers, Robert Rogers, and George Washington, Benedict Arnold and John André. Its 40 episodes can be seen on Netflix, where it is included with a subscription, or at $1.99 an episode on Amazon Prime and VUDU. Here is a two-minute trailer on YouTube.

This 2016-2017 PBS series follows New England dilettante and new widow Mary Phinney as she travels to the open city of Alexandria, Virginia to apply for a position as nurse in the Union hospital there during the American War Between the States.

The hospital had been installed in a hotel owned by a local family who have aligned themselves with the Confederacy, as had their neighbors, and which was requisitioned by the Union Army, which runs it.

When Confederate casualties begin arriving from the field, they too begin receiving treatment on humanitarian grounds, sometimes grudgingly, from the army doctors. A daughter of the family that owns the hotel, a naive socialite, finds that one of the Rebel soldiers brought in is her acquaintance and the friend of her sister’s missing beau. She too applies as a nurse, joining a cast of characters which includes slaves, former slaves, free blacks, rebel and Union soldiers, and locals who plot the assassination of President Lincoln, who is to make an official visit to the hospital.

James Green, Sr. (Gary Cole, Desperate Housewives, Veep), the patriarch of the family that owns the hotel and a furniture manufacturer, is shunned by his friends when he seeks to supply the hospital with coffins in a business deal. An idealistic civilian doctor (John Radnor, How I Met Your Mother) who has received training in Europe, develops a substance abuse problem and gets help from a free black who had been employed by a Philadelphia doctor before the war. The officious Head Nurse bores everyone with tales of personally working with Florence Nightingale in the Crimea.

Mercy Street (one-minute trailer here) is available on Amazon Prime with a subscription, or $1.99 for each of its 12 episodes on VUDU and Google Play.

In 1865, after the assassination of Lincoln, former Confederate soldier Cullen Bohannon (Anson Mount) journeys to the Union Pacific Railroad’s westward construction of the First Transcontinental Railroad to seek work and vengeance on the Union soldiers who killed his wife and son.

Hell on Wheels (2011-2016) takes its title from the traveling tent community of largely Irish, black and Chinese railroad workers, suppliers and hangers-on that followed the progress of the railroad on its way to Promontory Summit in Utah to join with the Western Pacific Railroad.

Between Indian attacks, construction dangers, workers with nowhere to burn off excess adrenalin, a deadly fort of Latter-Day Saints, and mendacious “Doc” Durant, who is an investor in the First Continental Railroad, and Thor Gundersen, his insane head of security, there’s plenty of room for melodrama.

Bohannon’s talents ultimately earn him the job of chief engineer, and he hires as his security chief Elam Ferguson (musician-actor Common), a freed slave. Bohannon and Ferguson bond, to their mutual surprise, and face the arduous tasks involved in establishing a transcontinental railroad with the women who enter their lives, which include a free-thinking newspaper reporter, a white raised by Indians, a Mormon “princess” and the Chinese daughter of a worker.

Hell on Wheels’  57 episodes (1:33 trailer here) can be seen on Netflix with a subscription, or for $1.99 per episode on Amazon Prime, VUDU and Google Play.

Next: More history including drama(tic) queens and a king. Email me here and follow Stream On OBX on Twitter.