On OBX, the enduring rituals of the big storm 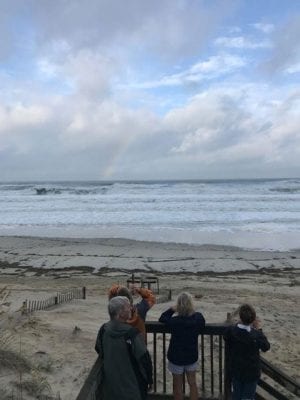 Another storm is behind us. When Hurricane Dorian’s winds swept to our north late Friday afternoon, those who had stayed here emerged from our homes to look around, to exchange notes with our neighbors, to be thankful, or to mourn.

Those of us north of Oregon Inlet fared pretty well; those to the south were devastated by flooding. In Nags Head and Kill Devil Hills, where flooding wasn’t too severe, people gathered spontaneously at Nags Head Pier and Avalon Pier, both of which suffered damage. Others strolled over to the beach, or cruised the Beach Road.

Storms are an occupational hazard of living on the Outer Banks, but it seems now that the mean ones are happening more frequently, before we have time to recover from the last.

So much energy is expended to get ready, to cope with the fear of what could happen, and sometimes, what does happen — such as what Ocracoke and Hatteras Islanders are dealing with now. Even when a storm ‘s impacts are not too bad, when everyone counts their blessings and breathes a sigh of relief, people still feel burned out from the roller coaster of intensity-waiting-intensity-waiting.

Depending on the level of fear and destruction we experienced before and during the storm, the degree of exhaustion post-hurricane may feel like the morning after a big party, or a gigantic riot, or a terrifying battle. It is always eerie at the next light, when the sun is shining but the surroundings have been altered.

Waiting out a storm can also have magical moments.  As I waited Thursday evening for Hurricane Dorian to arrive, I took a bicycle ride to the oceanfront in Nags Head during the infamous “calm before the storm” — before the wind is too powerful, and when the sky is surreal.

And after the crowds are all gone.

There’s a pattern we locals follow when a hurricane looms.  Yes, we prepare — enough said. Some of us might prefer to wait it out elsewhere.  But the ones who stay savor the beauty of the strange light, the crackling rawness of nature: the extra salty pungent air. The psychedelic sky with sculpted, uber-3-D clouds.  The heaving ocean surf that is the color of wet cement.

I’ve been through a lot of hurricanes on the Outer Bank starting with Hurricane Fran in 1996.  Improved scientific data and increased climate change risks have merged, in a cruel irony, to prolong the agony and make storms feel even more stressful — almost as if you’re told you’re at high risk of getting a terrible disease, and here are all your options. And by the way, make your decision within two days.

There’s an adrenaline surge before storms that creates a mix of anxiety and hyper-activity, in degrees that vary from person to person. Which of course explains the need to up the household’s alcohol supplies. If not alcohol, it will be another soother of choice, whether sweets, pasta or pharmaceuticals. Whatever it is, the ritual abides.

Even people like myself, who have always worked before and after a storm, will have down time before it arrives. Invariably, folks will go to beach to see the spectacle of a storm-maddened ocean, until the wind starts sandblasting them. But if you find the right access, the show can go on without suffering sand blindness.

With the sun low in the sky, and Dorian lumbering straight towards the Outer Banks, the beach was especially cinematic.  I stood at an overlook and watched seabirds expertly navigating wild wind gusts, carving twists and turns and leaps like surfers and skateboarders.

Nearby, a woman was taking a cell-phone video of the seething surf, oblivious to the seabird acrobatics above her. After scanning the scene with her phone, she quickly turned away and left, wordlessly. I was surprised, because usually people are amped up and very friendly and talkative before storms.

Now that Dorian is gone, the clean-up starts. As Outer Bankers do after every storm, each community will come together to help those who were hit hardest and left worse off – this time, of course, it’s Hatteras and Ocracoke.

And then, with new lessons learned, we’ll prepare for the next storm.