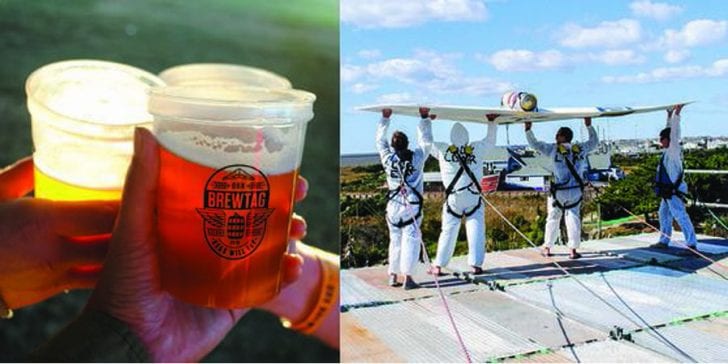 OBX Brewtag, which will be held on October 26th, 2019 at the Soundside Event Site in Nags Head, will donate 50% of all proceeds from this year’s event to Hurricane Dorian Relief efforts on Hatteras Island and Ocracoke Island.

Presented by Kitty Hawk Kites and the Outer Banks Visitors Bureau, OBX Brewtag is now in its fifth year. Billed as a festival of fun and flight, the event is a glider-building competition where teams construct creative and fun gliders that are used to launch an empty 1/6 barrel keg from a 20-foot tall flight deck. The event is also a craft beer and music festival, offering fun, food, and games for adults and children alike. More than 2,500 visitors are expected to attend this year’s Brewtag.

Half of all proceeds from the event will be donated to the Outer Banks Community Foundation Disaster Relief Fund, which is providing vital aid to the communities of Hatteras Village and Ocracoke Island that were ravaged by Hurricane Dorian. The remaining proceeds will be donated to the Rogallo Foundation to support the construction of the Rogallo Museum of Low-Speed Flight at Jockey’s Ridge State Park in Nags Head. Francis Rogallo, known as the “Father of Modern Hang Gliding,” developed the flexible wing in 1948, which was the forerunner to the hang gliders, paragliders, ultralight aircraft, stunt kites, and kiteboarding kites that are used today. The Rogallo Museum will educate the public about the history of low-speed flight and display artifacts, including a variety of flexible wings.