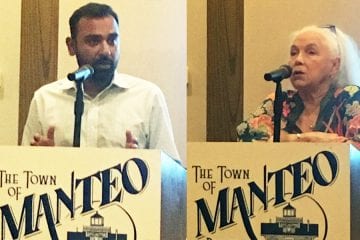 Signaling it is moving forward with efforts to build a waterfront hotel in the planned community of Marshes Light, SAGA Construction has formally submitted a text amendment request to the Town of Manteo that, if approved, would ease size and height restrictions for hotels there.

The requested changes drew a crowd at the Oct. 2 Manteo Board of Commissioners meeting, with a handful of residents voicing concern that SAGA would seek to build a hotel larger than the 60-room, three-story “boutique inn” outlined in a Conditional Use Permit (CUP) it received when it recently took over as the developer of Marshes Light.

Marshes Light is a planned unit development that has developed through the years according to a master plan created with the inception of the neighborhood in the early 2000s. Located just south of Manteo’s downtown, the community is connected to the municipality’s waterfront by the boardwalk along Shallowbag Bay and includes a mix of condominiums, single family homes and a marina, as well as lots designated for a boutique inn and office and retail space.

The proposed text amendment includes a provision exempting hotels from the 20,000-square-foot limit placed on commercial buildings. It is also seeking a 44-foot height allowance for hotels, compared to the 36-foot height limit now in place for other commercial structures.

Jason Borland, owner of Roanoke Island Inn, said he was concerned that the Marshes Light master plan was no longer being adhered to. “I think what we bought into – that original plan and how that makes Marshes Light an extension of downtown – that’s great and I think everyone is excited for that,” Borland told commissioners. “But undisclosed square footage…it doesn’t feel good.”

At the Oct. 2 meeting, SAGA Chief Executive Officer Sumit Gupta sought to reassure residents that he was still planning on constructing a boutique hotel, one that adheres to the original 60-room, three-story CUP.

“We want to do a nice boutique hotel there,” stated Gupta, but he noted that when planning the structure, designers arrived at a square footage total of just above 24,000 square feet. “That’s spread over three stories,” he noted. “My purpose was not to get more rooms, but to make the rooms nicer.”
He also told the crowd that the height allowance was intended to compensate for a requirement to lift the hotel up about six feet, as well as to achieve a desired ceiling height of nine to nine-and-a-half feet – a feature that he said will make for a nicer hotel.

Town Manager James Ayers explained that the text amendment request was placed on the commissioners’ meeting agenda prior to going to the planning board in an effort to “provide daylight and transparency to this issue, as there has been significant community interest in this topic.”

Ayers added that by putting it on the commissioners agenda first, and having commissioners refer the request to the planning board, “We can reach more people in the audience, plus it’s televised so people who can’t attend the meeting can view it on cable television.” Ayers said that approach allowed more opportunity for the public to voice an opinion throughout the process.

The Manteo Planning Board will take up the issue for the first time at its Oct. 8 meeting. The board of commissioners also set a public hearing on the text amendment request for its Dec. 4 meeting.

“You folks will be the final say on this issue, I can promise,” Mayor Bobby Owens told the crowd, adding later at the meeting’s conclusion that, “I want to make it very clear for everyone sitting here tonight, and all the residents of Manteo, that there will have ample time for plenty of public hearing. Nothing is being done behind the scenes or under the table.”