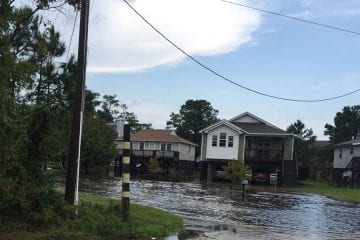 Storms like Dorian, which caused this flooding in Colington, are occurring frequently, Creef noted.

Sweeping changes to the FEMA’s revised 2020 flood maps will mean a 41 percent decrease in the number of unincorporated Dare County properties included in the flood zone. And the widespread re-classifications, county officials worry, could tempt some property owners to prematurely drop their flood insurance policies when the new maps go into effect on June 19.

“People like to save money, but the opportunity to save money shouldn’t come through your flood insurance policy based on these maps,” asserted Dare County Planning Director Donna Creef during a briefing to the Dare County Commissioners at their Jan. 6 meeting.

The new maps, which have received significant criticism for their reliance on what many characterize as outdated computer flood models that fail to take into account recent storm events, are used for insurance rating purposes to determine a property’s risk of flooding.

Creef said local experts are conducting outreach to urge property owners to consult their insurance agents before making any changes to their policies.

There are 2,890 properties that have been re-classified as X zones, which are areas outside of the 100-year floodplain and not subject to flood insurance. And as for the VE Zones, which include coastal and oceanfront areas subject to velocity flooding along with stillwater flooding, there will only be 124 properties in that zone compared to the current 1,828.

With so many properties transitioning to X zones, Creef said she fears that owners will not fully realize the risk of flooding they face. In fact, she noted, a number of properties that are transitioning from an AE zone to an X zone have flooded and, in some instances, have repeatedly flooded.

“Our goal is to try to educate those folks to understand…flooding can happen anywhere, anytime. Twenty-five percent of the claims filed happen in X zone properties.”

Not only are there a large number of properties being reclassified to a lower risk flood zone, “the elevations of those properties remaining in the flood zone are dropping,” acknowledged Creef.

To mitigate the impacts, the commissioners unanimously gave Creef the green light to move forward with amending the flood damage prevention ordinance to incorporate a local elevation standard of eight feet and requirements for freeboard, a factor of safety expressed in feet above a flood level. The ordinance will also include restrictions on ground floor enclosures in X zones.

“We will control through the flood ordinance where you elevate and what occurs in that area below the Base Flood Elevation,” asserted Creef. But she said the bigger concern was owners dropping coverage or electing not to get coverage for properties in the X zones. When asked what she’s hearing from local insurance and mortgage industry leaders about the new maps, Creef noted that they were “alarmed.”

Municipalities within the county are seeing similar changes in flood zone reclassifications as the unincorporated communities – which includes Colington, Hatteras, areas of Roanoke Island and the mainland – and are also looking at enacting standards to ensure adequate elevations.

For his part, Board of Commissioners Chairman Bob Woodard said that local officials had pointed out to FEMA officials that the models used to develop the map did not include storms such as Matthew and Hermine. “It fell on deaf ears,” he acknowledged.