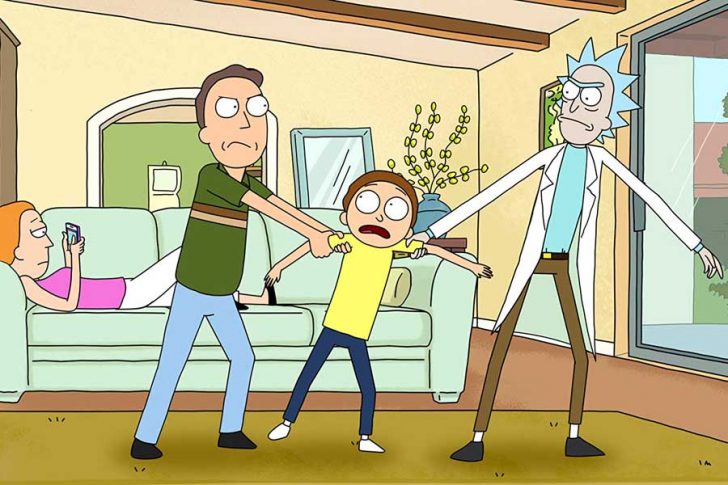 Frustrated family man Jerry Smith and his mad-scientist father-in-law Rick Sanchez struggle for the attention of Jerry’s son on Rick and Morty. (IMDb.com)

As we saw last time, animated series have completed their transformation to purely adult entertainment. King of the Hill was smart and insightful; the only question was, why animate it? Futurama was very smart and satirical; in its case (a space opera), animation clearly saved millions of dollars in special effects, but for both shows, the drawings were essential to the mood – King of the Hill was stolid and respectful; Futurama was subversive and ironic.

Enter the post-modern (actually meta-modern, combining modern and post-modern aspects) animated series, not suitable for traditional “family viewing.” The crude animation styles have been carefully calibrated, and the content deals with strictly adult material. Both of the following shows have numerous (adult-world) nominatons and awards.

RICK AND MORTY (1st 3 seasons on Hulu, Season 3 and 4 on [adult swim]; all seasons on-demand from other services)

Master and pupil. Holmes and Watson. House and Wilson. Id and ego. Rick and Morty? Adult Swim’s ongoing 2013 show began as a webisode using plagiarized characters from the Back to the Future films. The filmmakers, who met at a short-film festival, decided to make honest characters of themselves (and their creations) when the show took on a life of its own.

Rick Sanchez (series co-creator Justin Roiland) is an alcoholic, manipulative and sociopathic mad scientist who lives with his daughter’s family – her dull husband, Jerry (Chris Parnell, 30 Rock), and their children, Summer (Kelsey Grammer’s daughter Spencer) and Morty (Roiland). Rick’s daughter Beth (Sarah Chalke, Scrubs) takes after her father while remaining, to appearances, well-adjusted. Nobody expects much from Rick’s grandson Morty, but Rick has taken a shine to him. Unfortunately that usually means making Morty an unwilling accomplice and sometime scapegoat in Rick’s mad adventures in the multiverse. (A visual joke shows a box marked “Time travel stuff” on the shelf in Rick’s laboratory, refuting comparisons to Back to the Future.)

While the shows we’ve looked at earlier show the virtues of the nuclear family, Rick and Morty also shows its warts, its yang, if you will. Rick is cruelly dismissive of his son-in-law; when he asks Rick to invent something to stop the dog peeing on the rug, Rick says that that could make the dog smarter than Jerry is. “Is that a thread you really want to pull?” he asks.

A wealth of cinematic references (excepting Back to the Future!) flesh out the show. At one point, hapless Morty has been shrunk to the size of a grain of rice and injected into a homeless man (Fantastic Voyage) inside of whom Rick has built an anatomy theme park (Westworld and Jurassic Park). Terrified as usual, Morty points out a monster. Rick replies, “The only real monster here is (burp) alcoholism. That is an animatronic werewolf.”

Co-creator Dan Harmon (Community) is an acolyte of Joseph Campbell (The Hero with a Thousand Faces) and for my money could give David Milch a run for his money. I can’t recommend Rick and Morty highly enough. Here’s a 2-minute ”theatrical trailer.” [TV14] 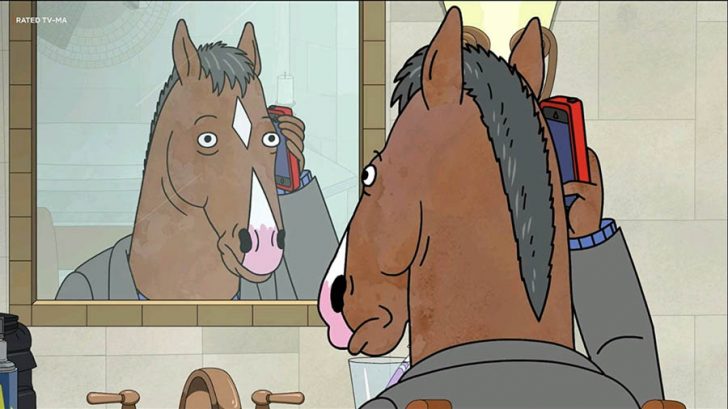 BoJack Horseman starred in a cheesy sit-com in the ‘nineties, but hasn’t worked since. He plans to engineer a comeback with a tell-all autobiography, ghostwritten by a third-wave feminist who has little idea of what she’s in for. (IMDb.com)

This ongoing 2014 Netflix original harkens back more to Hollywood-set dramas like The Day of the Locust, but in its universe the egocentric power-mongers and sycophants are as likely to be anthropomorphic animals as humans. BoJack Horseman (Will Arnett, Arrested Development) is “a self-loathing alcoholic horse currently in his 50s, whose acting career peaked when he starred in a successful ’90s family sitcom called Horsin’ Around. Though he began as a young bright-eyed actor, he has since grown bitter, deeply depressed, and jaded towards Hollywood and who he has become, post-fame.”^

BoJack’s suffering agent and sometimes girlfriend is Princess Carolyn (Amy Sedaris, Strangers with Candy), a pink Persian cat, who, later in the series, adopts a baby porcupine. The Kenny Bania to BoJack’s Jerry Seinfeld is Mr. Peanutbutter (Paul F. Tompkins), an earnest but largely untalented Labrador Retriever who is in a current, successful sitcom, which is a copy of BoJack’s former show.

The inherent nature of the animals portrayed usually inform the characters: Mr. Peanutbutter is not very bright, but big-hearted, generous and endlessly faithful to his friends. Princess Carolyn is imperious and private – and can leap to several times her own height. A recurring, bloviating newscaster seen on TV is a right whale.

Mr. Peanutbutter’s girfriend, Diane Nguyen (Alison Brie, Mad Men) is a third-wave feminist human who agrees to ghost-write BoJack’s autobiography, and Aaron Paul (Breaking Bad) is Todd, an unemployed but well-meaning and friendly 24-year-old human slacker who ended up at BoJack’s house after a party five years before the beginning of the series and never left. The plots are outlandish, very funny, and sometimes very dark, not unlike Curb Your Enthusiasm. Bojack Horseman is rated PG-MA. Here’s a two-minute trailer, “In the city of dreams, his life is the morning after.”