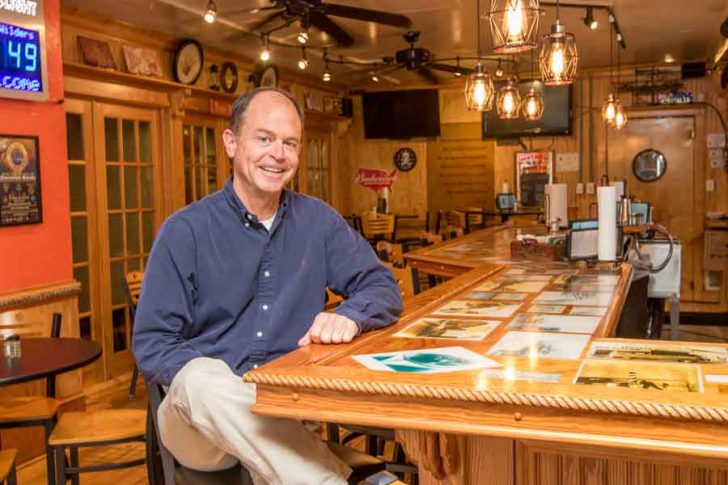 Tod Clissold, owner of Poor Richard’s in the After Hours Pub. (Jim Trotman) 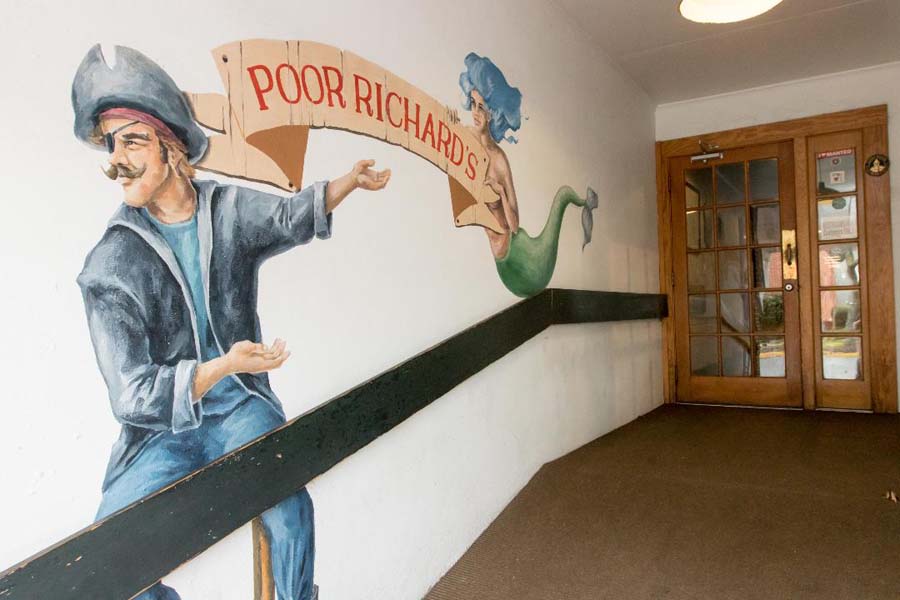 The weather finally turned a bit cold and thoughts turned to the French Dip; the beefy sandwich served “au jus” for dipping and with contested provenance. All stories agree it was conceived in Los Angeles back in the early nineteen hundreds. It remains a popular menu item in diners across the land and is a personal favorite of mine.

As things happen in this age, when a word dropped in a conversation magically shows up in ads in our social media feeds, a posting announcing the French Dip as a special at Poor Richard’s in Manteo popped up.

The notion of revisiting Poor Richard’s, Tod Clissold’s homie sandwich place on the Manteo waterfront, had been stewing for a while. Back when our business was located in Manteo, the shop was a weekly lunch spot for our crew. In the years between, Clissold has expanded within the building to create The After Hours Pub, which enjoys a loyal evening following. It was high time to see how things were going. 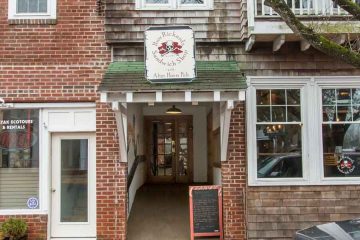 Walking up the ramp to the entrance is a bit reminiscent of boarding a ship. The long hallway passes the pub and ends at the order counter. On this day, the room was full, but it was only a short wait until a table was available. Taking in the room, a cross-section of Roanoke islanders occupied the booths and tables — people in the building trades, an attorney or two, and an educator here and there. A couple in one booth was discussing cinematographers. At another, three men were talking about regattas from the old days. A four-top of law enforcement officers was visited by an elderly woman; her hand gently touched one man’s shoulder as they greeted her with smiles.

The dining room is not large, but any overflow can sit on the deck in nice weather, or take a seat in the pub, since it doesn’t start to swing until the evening. The kitchen is tiny but efficient, with the seasoned staff bustling shoulder-to-shoulder to keep the orders moving.A fanciful mural decorates the better part of the north wall. Katy Gullett, who was working for Clissold at the time, created the stylized, bird’s-eye-view of downtown Manteo with the Elizabeth II docked in background. Clissold said, “That was the first thing she ever painted. She would spend the night in here, push six chairs together to sleep on. She’d get up and paint.” 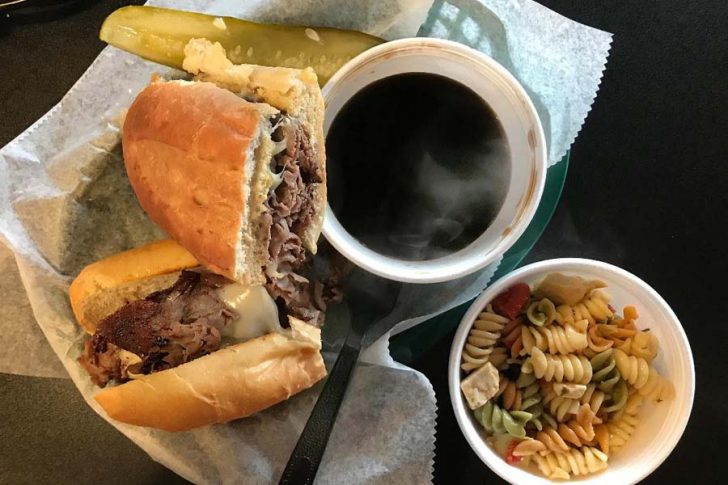 The French Dip was everything it should be — bread, meat and cheese. The robust roast beef and Swiss cheese tucked into a fresh roll was substantial, and the jus was a full cup of piping savory broth. An artichoke and feta kissed pasta salad carried just the right balance of tangy and savory dressing and was a nice counter to the sandwich.

On the following visit, I was curious if a favorite standby was still as tasty as remembered and it was. The Sailor is a grilled affair built around a hefty heap of pastrami and a grilled and sliced knockwurst with Swiss cheese on rye bread napped in spicy mustard and a crushed cherry pepper relish. It was a tornado of textures and tastes and is gratifyingly messy to eat. There is a reason each table sports a whole roll of paper towels. 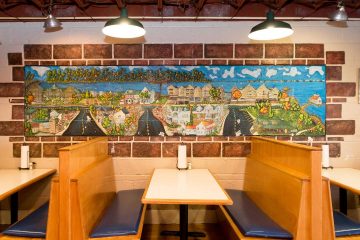 The original owner, Richard Brown, opened his sandwich shop in a popular location. Situated between the Dare County Courthouse and the waterfront boardwalk, the site was a prime spot for downtown foot traffic and boaters soon found it a reliable and easy to approach destination. According to Clissold, Brown first called it Keeper’s Galley, but so many people were thinking it was a seafood place that after the first season he changed the name to Poor Richard’s. It has been a Manteo icon ever since.

“This, where we are sitting now, was a radio station, WVOD, which is how I met Richard,” said Clissold as we settled into the new bar stools to catch up. At the time, Clissold was an advertising salesman for the station. “He and I became good friends and out of the blue in 1998, he just decided it had gotten too busy and he ended up selling to me in 1998.”

There have been a few changes in the restaurant’s 36-year history. Clissold states that keeping his menu consistent, adding things every so often and keeping his prices affordable, have been key to its longevity.

The menu does have a few items that almost dare the arteries with names such as the afore-mentioned The Sailor, the Heart Attack Wrap (pulled barbecue, bacon and cheddar), and the Angry Burger (quarter-pound Angus, pimento cheese, bacon and jalapenos). Yet lighter fare has also found a home. “We’ve added some healthy items throughout the years,” Clissold said. The Cali Wrap with grilled chicken breast, avocado, mozzarella with balsamic dressing and the newly added plant based Impossible Burger are popular options as are salads and soups. 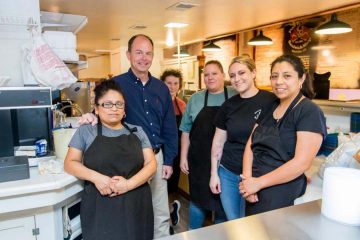 The staff has been a constant as well. Clissold said, “The majority of my help has been here six years plus, which is, I hope, a good sign.”

“It’s amazing. We’ve seen people who used to come in here as kids, and now, throughout the years, they’ve become adults and parents, and some order the same thing they ordered as kids.” 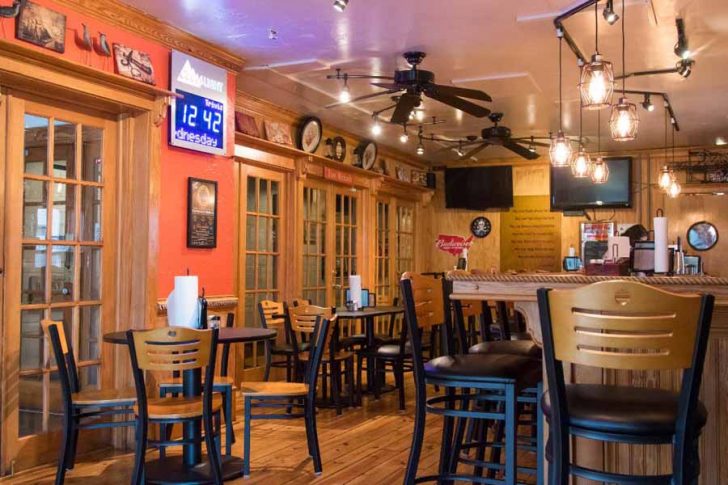 Years ago, walking in, if you looked to the right, you might catch a WVOD air personality at the microphone. This is the space that is now the pub, all wood paneling, black accents, a dartboard and modern lighting. The acrylic bar top showcases historic photos of the areas past. Behind is a well-stocked bar. In 2011, Manteo approved serving mixed drinks to the public.

“Yeah, we were the first one in Manteo to serve liquor-by-the-drink,” said Clissold.

The pub warm and inviting, a cozy space with the ability to expand with the crowd. “We’ve made a name for ourselves with the small venue, with two or three people playing acoustic here,” Clissold said. Summer brings acts from beyond the local area.

The winter is the time for rebuilding. Having finished with the pub, the deck fronting Shallowbag Bay is being rebuilt and refitted for al fresco dining, including the deck above it being waterproofed to protect deck diners from the occasional shower.

“Yeah, In the winter I spend all the money I make in the summer,” Clissold said.

The pub is open seven days a week starting at 5 p.m., the restaurant is open Monday through Saturday, 11 a.m. until 3.