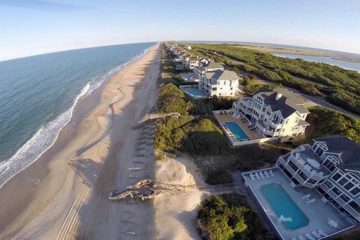 After years of being a holdout on the issue, Currituck County this spring will begin a three-year study to determine if Currituck Banks beaches need nourishment — a decision that some say is long overdue.

The county is an outlier, the last one in coastal North Carolina to take a look at beach nourishment according to Jeff Shields, President of Seaside Management, which manages the Pine Island Homeowners Association, the largest subdivision in Corolla.

“They’re the only coastal community in coastal Carolina that isn’t slamming money away for nourishment,” Shields said.

Pine Island has undertaken two shoreline studies over the past few years. The first was in 2015 with a follow-up study in 2017. Pine Island is currently undertaking a third study using drones to map changes along the subdivision’s shoreline.

According to Shields, these studies were the impetus behind Currituck County’s decision to look at beach nourishment.

“We have a dune committee with myself as the manager, and have been inviting the county to our retreats and trying to get them to start to talk about beach nourishment and about beach management,” Shields said. “We asked them to put money in the budget to do a study like ours. We have the information and we openly shared it with them. As a result of us working with them for three years, they finally agreed.”

The current chairman of the Currituck County Commissioners, Bob White who represents Corolla, agrees that Pine Island played a role, although he also credits his constituents.

“Mostly the community had voiced their concerns over beach nourishment,” he said. “The folks at Pine Island had funded studies over a four-year period.”

Commissioner Paul Beaumont has in the past voiced opposition to nourishment, telling the Virginian Pilot in August 2019 that, “Our beaches are fine.”

He does, however, support the county’s current study, saying, “The engineer in me is wise enough to know, that no matter what the external appearance is, there may be shifts along the beach, and under the surf which are not readily apparent. Despite my belief that our beaches are in good shape, I would like to see the science.”

“We thought that Pine Island was the worst area. What came out of the study was it wasn’t as bad as we thought it was,” Hanig recalled. “It got me thinking maybe it’s not as bad as we think it was.” He does feel, though, that the study should have been initiated earlier.

“I was the one who was advocating to get the study to get a baseline to know where we’re at,” referring to his time as a county commissioner.

Shields, though, is more cautious in his assessment of the state of Corolla beaches, pointing out that the studies done for Pine Island were not as detailed or comprehensive as the county study will be — given that it will include the littoral zone of the ocean.

“For years everybody stared at the dune and said that’s it…When you look at the whole picture, the dune makes up two percent. The littoral zone goes from that dune to nineteen feet deep in the ocean,” he said.

The county has come under increasing pressure to address beach nourishment. In 2004 the North Carolina legislature passed legislation allowing the Currituck Banks to collect occupancy tax. The law directed funds to be used for tourism-related activities and beach nourishment. However, the law also gave county commissioners broad latitude in how they could define a tourism-related activity.

According to county records from 2015-2019, Currituck County spent $35,690 on a cost-sharing program with Outer Banks property owners to plant dune vegetation. The county has not specifically earmarked any funds for beach nourishment.

“They haven’t put one dime into a [beach nourishment] fund of this extra occupancy tax,” Corolla resident, Ed Cornet said.

Cornet, who has a PhD in physics and was a professor of business at the UNC Kenan-Flagler Business School, was a member of the Currituck County Economic Development Board for a number of years. He said Corolla residents started thinking seriously about the condition of their beaches when they started noticing a serious drop in their after properly values in 2012 and property taxes increased significantly in 2013.

“The property tax increase, that was the trigger,” Cornet said. “That’s when people started to pay attention. Why did the property values drop by forty percent in Corolla? They haven’t put a dime into a fund to restore the beaches.”

“Dragging their feet, that’s being very, very nice to the county,” he said, referring to the recent decision to undertake a nourishment study.

Nonetheless, Cornet does feel that the county is moving in the right direction.

“I’m glad they’re doing it. It’s the right thing to do. It’s not too late yet. But they should be putting a couple of million dollars a year out of occupancy tax into a fund so that when they have to do it, they’ll have the money,” he said.