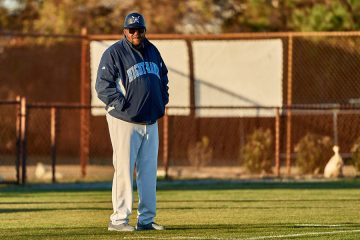 First Flight got their 2020 baseball season underway with a thrilling come from behind victory in the bottom of the seventh on Tuesday, March 3. Hosting the Bears of Bear Grass Charter Academy, the Nighthawks fell behind 1-0 when Bear Grass leadoff hitter reached base via walk and eventually came around to score in the top of the 1st.

Starting pitcher Brentan Rowe, a senior for First Flight, walked Johnson before settling in and retiring the next two batters. A routine groundball gave First Flight the opportunity to exit the top of the 1st unscathed, but a fielding error on that groundball allowed Johnson to score.

Rowe’s counterpart, Logan Coltrain retired First Flight in order in the bottom of the 1st. Rowe got himself into a little bit of trouble in the 2nd when he followed up a Colin Langley walk with back-to-back walks to load the bases. With the Bears threatening to do some major damage, Cole Eldridge would play the role of defensive stopper when he snagged a line-drive and calmly stepped on 2nd base to complete an inning-ending double play.

Colin Wyant would notch the first hit of the game for First Flight in the bottom of the 2nd when he singled to center. A Cole Eldridge single would place Nighthawk baserunners at first and third with two out when First Flight would attempt a double steal. Eldridge was safe at second base, but Wyant was thrown out at home to end the threat and First Flight still trailed 1-0.

After Rowe cruised through the top of the 3rd inning, First Flight would finally get on the board in the bottom half of the frame. Junior outfielder Tristan York reached on an error and eventually came around to score on the second Bears error of the inning. The score was 1-1 until the top of the 4th when Ty Johnson hit a solo homer to left to put Bear Grass back out in front.

Trailing 2-1 in the bottom of the 4th, sophomore Porter Braddy got a rally going with a single. He then advanced to second base on a single from Wyant before scoring on an RBI groundout from Cole Eldridge. Tied at 2-2 in the 5th, First Flight would take their first lead of the game when sophomore catcher Noah Smeltzer doubled and scored on a single from Greer Farr.

In the top of the 6th, Rowe allowed a leadoff single to Bryce Carlisle before striking out Rustin Reason for the first out of the inning. Rowe threw the first two pitches to Shane Lanier for balls and was then removed during Lanier’s at bat. With one on base and one out, Porter Braddy was brought into the game with a 2-0 count on Lanier. Lanier put the ball in play leading to an infield error that allowed Carlisle to score, and the Bears to tie the game at 3-3. Lanier would also eventually come around to score on yet another Nighthawk error and now Frist Flight found themselves down 4-3.

That’s where we stood when Cannon Metcalf drew a leadoff walk to start the 7th inning for Coach Steve Saunders and his crew. Colby Evans entered the game to pinch-run for Metcalf and advanced to second on an Aidan May single. Brentan Rowe followed with a walk that would load the bases with nobody out and First Flight still trailing 4-3. Following Rowe was Smeltzer who would also take a walk, in turn plating the pinch-runner Evans. Tied at 4-4 Greer Farr stepped to the plate and smacked a fastball into the gap in left-center. Bryce Carlisle, who had already made several great plays in centerfield for Bear Grass, was unable to run this one down and Aidan May would score the game-winning run. Saunders and his Nighthawks win the home opener 5-4.

The next Nighthawks home game will be on March 12 and can be heard locally on 98.1 The Score.

Tom Hoggard is sports director/media consultant at East Carolina Radio. He hosts the Outer Banks Sports Report on 98.1 The Score Monday through Friday from 7 to 9 a.m.