By Outer Banks Association of REALTORS (OBAR) on March 5, 2020 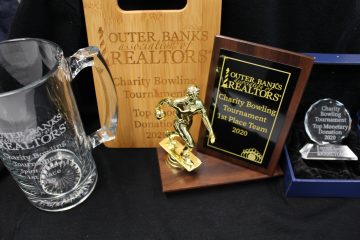 Last year in response to the urgent need from local food pantries during the government shutdown, the Outer Banks Association of REALTORS® (OBAR) held a charity bowling tournament to help “fatten up” the food pantries. It was a Mardi-Gras themed event that resulted in raising $4,300 in cash donations, and the equivalent of 243 meals in non-perishables for local food pantries. Once again, the recipients for this year’s tournament were the local food pantries and the theme was the roaring 20s – “Bowling 20s for Roaring Tummies.” OBAR President Jimmy Anderson of Long and Foster, OBX said, “If you have ever witnessed someone in a situation where they have to go to the food pantry, then you will know how compassionate and wonderful the staff and volunteers are.” He continued, “With so many of our residents out of work during the winter months there was not a better time to donate, donate, donate.”

And donate they did. According to the Bowling Tournament Chair, Brenda Davis-Williams, “I am beyond thrilled that not only did we have a successful night, but we broke last years record.” In one night, twenty-four teams, “raised $5,000 and donated 1,394 pounds of food which is the equivalent of 1,161 meals” said Davis-Williams. The money and food raised will be evenly distributed between the Lower Currituck Food Pantry, Beach Food Pantry, Mount Olivet United Methodist Church (Manteo), Hatteras Island Food Pantry, and Bread of Life Food Pantry (Ocracoke). “And I must thank Beach Food Pantry’s Executive Officer Elisabeth Silverthorne, and Pantry BOD member Matt Melvin for weighing and distributing food according to each pantry’s needs,” said Anderson. “They worked throughout the entire event to make sure each food pantry received what they needed–almost 1,200 pounds!”

While the purpose of the charity bowling tournament was serious, attendees turned it into a night of fun and camaraderie. Local DJ Justin Bateman was the emcee and kept the crowd engaged throughout the evening. Wells Fargo Home Mortgage continued their winning streak by bowling the top score and receiving the “1st Place Team” award. Brindley Beach Vacation & Sales’ team “Off Constantly” snagged the “Top Monetary Donation” award. Sun Realty’s team “Guys, Dolls, & No Gutter Balls” donated the highest volume of food, bringing in 299.5 pounds—the equivalent of 250 meals, to win the “Top Food Donation” award. And every year, teams love to compete for the “Spirit Award” for the most outrageous decorations and costumes. This year the theme was the popular “Roaring 20s” and team “Baby Face Jake & the Bank Robbers” from Steven Gillis State Farm took the honor.

In and effort to raise as much as possible, there was a grand prize, online auction, and nine raffle packages. A big thank you to those contributing to the grand prize and silent auction. The grand prize, available through pre-event tickets only, included a 7-day oceanfront staycation donated by Sun Realty, four 1-hour massages by Exhale Massage & Bodywork, admission for four from Nags Head Dolphin Watch, and a gift certificate to TRIO Restaurant & Market.

A special thanks also to the following businesses and individuals that generously contributed to the event’s success: