‘Making the best of a bad situation’ 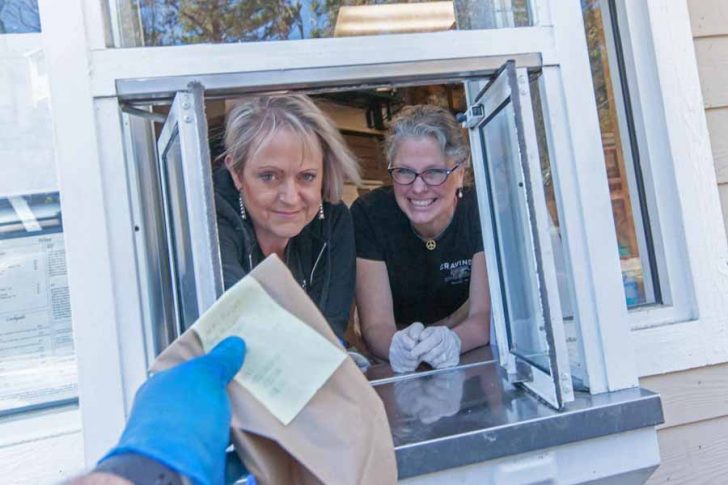 At Coastal Cravings in Duck, Carolyn Clark hands off an order at the drive through window with Manager Angel Doebler at her side. (Jim Trotman)

Honoring the resiliency of OBX restaurants

Under normal circumstances this space would give readers a look at an area dining spot that might be a little quirky, a little different and usually, very creative. But these aren’t normal circumstances. Our friends in the local restaurant trade are getting hit hard, like many businesses, and many are relying on that creativity and some hard work to see them through this very trying time. And many are helping the community-at-large even as they struggle to face the very uncertain times.

In Dare County alone, there are just over 300 restaurants listed on the outerbanks.org restaurant page. All of them are feeling the bite. If you are a local, chances are that you or someone you know is in the restaurant industry here and is being impacted by the coronavirus threat. Since getting food to people is essential, many have remained open, offering takeout or delivery service only.

For some, the sound choice has been to delay reopening after the winter break. Other establishments that are normally open year-round have decided to hold off altogether under the all clear. But the people need to eat, and so a good number have committed to continue serving with some modifications for safety sake, for as long as they can.

Chef Daniel Lewis, president of the Outer Banks Restaurant Association (OBRA), said that coordination between the OBRA, the North Carolina Restaurant and Lodging Association, Sheila Davies, Director of Dare County Health and Human Services Department and the governor’s office was key to establishing methods for the restaurants to continue service in a timely manner.

Clear communication is essential in times of crisis, as the area’s past with hurricanes has clearly shown. This time is clearly different.

“I’ve heard so many comparisons to this as a hurricane. This is not that,” Lewis said by phone this week from the kitchen at Coastal Provisions, his restaurant in Southern Shores. They made the decision to close the restaurant, but he was there, baking bread and turkeys for his other restaurant, Coastal Cravings, in Duck, and preparing items for drop off at the Outer Banks Food Pantry.

The building that Coastal Cravings occupies had once been a Burger King, and as such, it has the only drive through-window in the town. It has served well since the ban on gatherings of 10 or more people. As Lewis said, “Who would have thought how important a drive-through window would be?”

Like many others, Lewis is hopeful the stimulus and SBA loans and other measures will help. But how long it will take to turn things around remains a big question. “This is all unchartered territory,” he said.

Chef Donny King, of Ocean Boulevard, has streamlined operations and has navigated the change from white linen service to takeout options. “It’s taking a look at our menu and deciding what modifications can be made to dishes that will hold up for take-out setting,” he said. “Fortunately, it’s the time of year when the product we have on hand is heartier. It will hold better [as a takeout option] than the lighter fare we’d have later in the season.”

King is keeping his thoughts on brighter days ahead, adding that. “We are already planning for our opening date, whenever that will be.”

Chef Mark Shafer, of Sandbars Raw Bar and Grill maintains a refreshing upbeat outlook in the face of these unsettling times.

“Not once since this happened have I thought that I would not open back up,” he said. “It’s just when. And when we do, we will probably have the biggest summer we’ve seen in decades.” 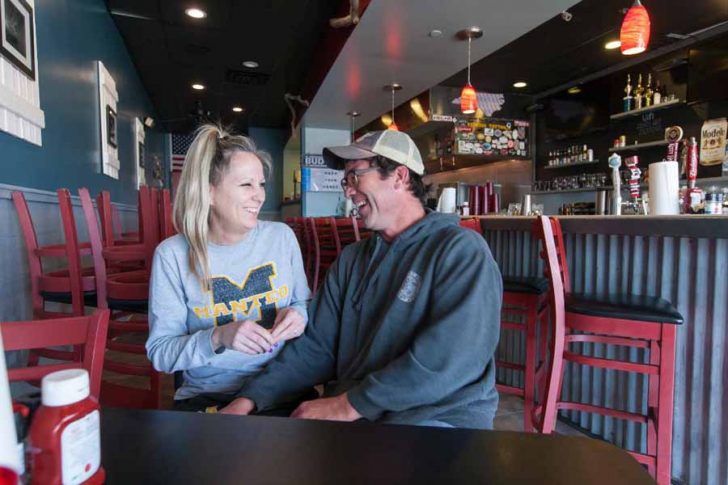 At Sandbars Raw Bar and Grill in Kill Devil Hills, Michelle Shafer gets a laugh and a confidence boost from her optimistic husband, Chef Mark Shafer. (Jim Trotman)

Financially, he considers everything to be on hold. “We are all in this together,” he asserted. “I’m not asking for money from people who owe me, and people that I owe money to, they’re saying, ‘Let’s wait it out.’”

His wife, Michelle Shafer, a teacher at Manteo Middle School, is less sanguine. “I know he comes across as positive,” she said, “but from the wife of a young restaurant person, I’m scared to death.” His optimism helps see her through though. “He keeps me from crying at least five times a day.”

On the morning of April 1, Kim Parker was getting her day started at Henry’s Restaurant, which she owns with her parents, Henry and Linda Ezzell. Around 7:00 a.m., she heard that the day’s high winds would keep school buses from running, and with that, the school meal program wouldn’t be happening.

“I just couldn’t stand the thought of any kids being hungry,” she said. 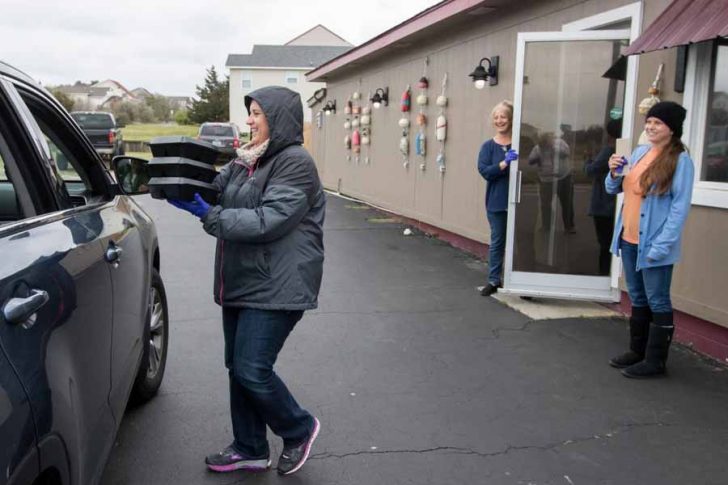 At 7:30, she texted her friend, Amber Dodge, the cafe manager at First Flight High School, with the idea to provide meals for any families with school children free of charge. Within two hours, the kitchen at Henry’s was brimming with box lunches of ham sandwiches, applesauce, fries and fruit. Parker also enlisted longtime friends Misty Curles and Milah Elliot to volunteer to help with the traffic, passing the box lunches from the side door. They started at 11:00 a.m. and had provided more than 200 meals when all was said and done.

On the same day in Manteo, the Garden Deli swung into action with the same goal to get meals free to those children impacted by the weather. By the time they ran out, the deli had handed out 150 free box lunches for school children.

Other restaurants, struggling with the impact, have come forward to provide meals to those on the front lines, offering free meals to police, EMS and fire departments and others tasked with keeping us all safe.

John and Sue Woolard of Rooster’s Southern Kitchen in Kill Devil Hills had a pretty big idea, that of working together with sponsors and volunteers to provide free dinners, community-wide, twice a week. It has become known as Curbside Community Suppers. The plan was announced to provide at least 500 meals free of charge to their Outer Banks neighbors. Healthcare professionals screened those volunteering with the suppers beforehand.

On April 2nd, the tables were set; masks and vests were in place and the food positioned for service. By 4:00 p.m. cars were observed lined up from the restaurant’s Hwy 158 location up West Baum Street up to and along Sixth Avenue to nearly Colington Road. 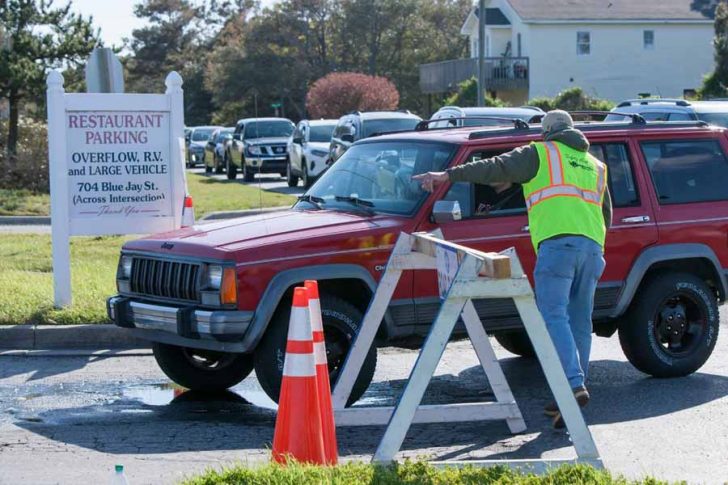 At the entrance to the parking lot of Rooster’s Southern Kitchen, volunteer John DeBoy, in vest, directs a car to the waiting service tables with many cars lined up behind. April 2nd was the opening night of the twice-weekly Curbside Community Suppers. (Jim Trotman)

At 4:30, the parking lot was opened, and the first cars rolled to either side of the prepared serving stations. By 5:00, about 700 meals had been distributed. They will continue to provide these suppers on Mondays and Thursdays from 4:30PM to 6:30PM.

Across the area, restaurants are pulling together with similar kind, selfless acts. As Chef Daniel Lewis observed, “It’s about restaurants making the best of a bad situation.”