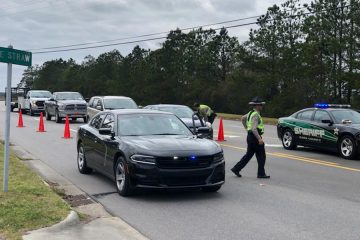 A Raleigh attorney has filed a complaint in federal court on behalf of six out-of-state Dare County homeowners arguing that Dare County’s March 20 declaration restricting access to the county due to the COVID-19 pandemic is unconstitutional.

The April 7 complaint, filed by attorney Chuck Kitchen in the U.S. District Court for the Eastern District of North Carolina, argues that the county’s amendment to its March 16 State of Emergency declaration intrudes on the owners’ rights under the Privileges and Immunities Clause of the U.S. Constitution.

“While the residents of Dare, Currituck, Hyde, and Tyrrell counties have the right to travel in Dare County, to engage in a common calling, and to obtain medical treatment in Dare County, the Plaintiffs are prohibited from engaging in these activities solely because they are residents of another State,” the complaint argued.

The complaint also asserts that the Privileges and Immunities Clause is applicable to the actions taken by local government, and that the March 20 declarations “could not survive under a strict scrutiny analysis” because the orders are not narrowly tailored to serve the government’s interest in public safety. The complaint also states that the county’s action “excessively intrude upon Plaintiffs’ rights…effectively banning them from engaging in conduct that is Constitutionally Protected.”

Since Dare County’s March 20 decision to bar access to non-resident property owners, an impassioned and often angry debate has erupted on social media, and elsewhere. In remarks made at the April 6 meeting of the Dare Board of Commissioners, Chairman Bob Woodard said, “The decision to restrict visitors and non-resident property owners was not made lightly. We truly hope everyone will understand that this difficult decision was made to safeguard our citizens. These restrictions will save lives.”

Meanwhile, Dare County Sheriff’s Office has manned checkpoints into the county around the clock, dealing with some travelers who try to gain access the county through strategies that range from securing temporary licenses to hiding in the trunks of cars.

Kitchen, who told the Voice he has since received calls from other non-resident Dare and Currituck property owners affected by the March 20 order, said that he did not know when the complaint would be scheduled to be heard. As of April 7, Dare County had not been served with the complaint.

“All of the [plaintiffs] own property in Dare County and are being kept from going to Dare County because they are not from one of the four counties Dare County lets in,” Kitchen said, referring to residents of Dare, Currituck, Tyrell and Hyde counties.

The compliant also argues that pursuant to North Carolina law, the March 20 declaration must be made through an ordinance rather than a resolution. “The Dare County State of Emergency Declaration is therefore an ultra vires act of the County as it was not lawfully enacted in accordance with a valid Emergency Management Ordinance,” it stated.

Dare County Public Information Officer Dorothy Hester confirmed that the county has not been served with the complaint and said that the county was unable to comment on possible litigation.