The Lost Colony pauses, plans for the future 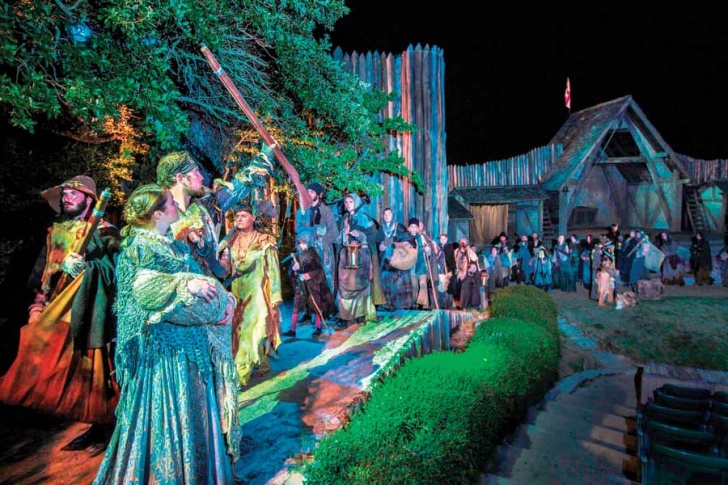 CEO Coleman and most of staff laid off

With the 83rd season of Paul Green’s The Lost Colony cancelled this month due to the COVID-19 pandemic, the Roanoke Island Historical Association (RIHA) Board of Directors has turned its efforts in the coming months to modernizing the iconic show that has been performed nightly each summer at the Waterside Theater for more than eight decades.

As for the immediate future, uncertainty remains about whether North Carolina’s mass gathering guidelines will loosen to allow the curtain to open on an “alumni show” later this summer. And a big question revolves around The Lost Colony staff. With the show’s cancellation this summer, five of the seven full-time staff members – including its Chief Executive Officer Bill Coleman – were notified on April 7 that they were furloughed for three months and then will be terminated.

According to RIHA Board of Directors Chairman Kevin Bradley, the decision to cancel this season was a difficult one. “It was a historic decision…and we realize there will always be an asterisk next to this leadership team,” said Bradley, noting that 70 percent of the organization’s revenue comes in over the summer season. “Without our summer season, we had to set ourselves up to survive, and our organization [still] be standing, by the end of the year.”

Bradley said that if the stay-at-home order expires and the state opens up, RIHA is planning to pull together an alumni show in the theater that would highlight the show’s most cherished scenes, ones Bradley said, that “folks are emotionally tied to.”  The event, which could potentially run over a few weekends, would be free to the public with the opportunity to offer a donation.

The August show, he added, would be trimmed down to an hour as opposed to the roughly two-hour show and likely coincide with RIHA’s annual celebration of Virginia Dare’s birthday in late August. He also said the fourth annual Lost Colony Wine & Culinary Festival on Sept. 26 was still expected to proceed as scheduled.

A longer-term goal the board is focused on, Bradley said, without offering details, was to modernize the show in an effort to tell the story the most relevant way. “It will be a fresh look on a historical treasure,” he asserted, adding that the show will be “very different” while “still honoring the past very well.”

While staffing has been reduced to a skeleton crew, Bradley said RIHA will begin rebuilding its crew as it moves closer to the 2021 season. “We’ll be bringing staff back in such a way that supports our new type of show.” While saying he could not comment on whether former staff will be brought back or there will be new staff, he said he expects the board will identify candidates by the first of the year.

For his part, Coleman, who has been CEO at The Lost Colony for almost eight years, said the process of letting the staff go was disappointing. While acknowledging that furloughs and layoffs are happening in the community and across the country, Coleman took issue with the process, saying furloughed staff members were notified on April 7 to be out of the office by the end of the day and then received a letter with the terms of the furlough and eventual termination.

Coleman acknowledged that, “The theater business is out of business – it’s not even going on on Broadway. The tourism business is another business that’s taking a major hit and we’re an organization that did both. I would be surprised if we were able to maintain a full staff.”

“But you know,” he added, “I can take my own, but I just felt like the staff were more or less caught off guard. All of us at the organization were good friends, and good teammates…and again, we felt somewhat, I think maybe discarded is the word.”

When asked to comment on the RIHA’s process of letting go the staff members, Bradley declined, adding that it would be inappropriate to comment on former employees.