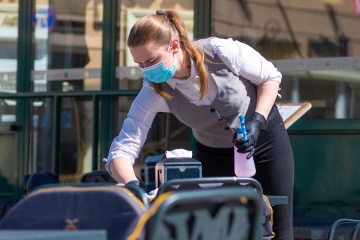 More outdoor seating and staffers with face masks may well be part of the new normal for restaurants. (Shutterstock)

As the curve of COVID-19 infection in North Carolina flattens, restaurants on the Outer Banks are starting to look forward to a time, hopefully in the not-too-distant future, when they will be able to reopen to the public.

There will be changes that are obvious. Social distancing guidelines requiring tables to be six feet apart will, in many cases, cut the number of seats in restaurants in half. Gloves, face masks and face shield may be part of the daily uniform of personnel.

Other changes may not be as apparent, but the people who know the Outer Banks restaurant business feel the changes will be key factor in which businesses survive and which ones do not.

“There’s going to be people who aren’t going to make it through this,” Dan Lewis, the President of the Outer Banks Restaurant Association said.

“The restaurant business by nature is flexible and evolving and always finding out how to make things work. At the same time, the industry works on relatively [small] margins that most business models say cannot withstand a fifty percent reduction in sales,” he explained.

“When change comes down the pike, we’ve got to embrace it,” Wes Stepp, chef and owner of Red Sky Cafe and NC Coastal Cuisine in Duck said.

In interviews with a number of Outer Banks restauranteurs there were some constants in what the owners felt the summer was going to hold.

“You’re going to probably see more outside seating. You’re removing seats inside, you have to find seats,” said Kenny Hyman of Trio in Kitty Hawk.

Mike Kelly, who has owned restaurants on the Outer Banks for over 30 years agreed, but he added some cautionary notes.

“I think if you’ve got a yard out there, build it. One thing about it in the summertime, you’ve got insects, heat, you’ve got wind.  You’re putting a pretty large investment to put a brick patio in, but are you going to be using it years down the road to get your money back out of it,” he said.

What is happening now, Kelly points out, is not the first time that restaurants have had a reason to create an outdoor space for customers.

“We had to do it with smoking areas and people have learned to use them.,” he said.

Other changes will occur as well, and they may change how people think about fine dining.

For the past six weeks, restaurants on the Outer Banks have not been allowed to have customers in their dining rooms, so many of them began offering dining to go — and that’s not going to go away.

For the restaurants that already had a strong takeout business, the new reality helped keep the doors open and personnel employed.

“We’re really grateful for our to-go program and our delivery program. The business isn’t really making any money, but we’re able to pay our utilities and keep some employees working,” said Grant Sharp, who with his wife Natalya, own Max’s Real Italian Restaurant in Kill Devil Hills.

For Stepp, embracing takeout and delivery service at his Duck restaurants led him to what he feels is a new opportunity.

“I told my staff, ‘We’re not here to make money. We’re here to invest back into the community and through that we’re going to find a business model that works,’” he said. “We started doing the takeout and delivery and then I created a virtual market. I’m like, ‘We’ve got all this food. Let’s put it online.’”

Although local restaurant owners are seeing innovation as necessary, there are worries about some of the changes that social distancing will create.

Certainly, losing half the seats in a restaurant is concerning, but for restaurants with their razor thin profit margins on food, the loss of bar seating could be devastating. Alcohol sales are often the most profitable part of a restaurant’s business.

“With the dining room being closed to us and not being able to serve any alcohol, that’s cut off so much of the business that we would have,” Natalya Sharp said.

For many Outer Banks restaurants, live music at the bar has been an important draw. And that too, may be a casualty of social distancing.

Donny King’s Ocean Boulevard has been a regular place to catch live music for years, but he doesn’t see how that could continue with social distancing guidelines.

“Live music promotes people milling around. I don’t know how that would work,” he said.

It is possible, he added, that a larger outdoor venue might be able to meet the criteria of social distancing, but for Ocean Boulevard, with its small outdoor seating area, it doesn’t seem practical.

“You can’t pay a musician $200 or whatever and have somebody hanging out and having a small plate and a drink for two hours,” he said. King added that he is thinking of partitioning the bar with plexiglass, but he isn’t sure that would meet state requirements.

“There are some guideline coming from the state, but nothing is defined,” he said.

And that is a significant part of the problem that restaurants are facing.

“Nothing is set. We have a good indication of what reopening looks like. But until the governor signs that executive order saying okay …we can reopen restaurants at fifty percent or whatever that marker is, we won’t know,” Lewis said.

Lewis makes the point that, although there may be some uncertainty about the specifics of what restaurants will look like when they reopen, there is an effort to make that transition as smooth as possible.

“The good thing about what’s going on in North Carolina. is that there’s good communication and good working groups, not only on the state level working with the governor’s office. [The] same thing is happening on the local level with a local group working with the [Dare County] Control Group,” Lewis said.

And, as Mike Kelly observes, the degree of uncertainty this year may be larger, but uncertainty is part of life in the restaurant business.

“You’ve got to go into it with the thought that the opportunity is there,” he said. “On October 10, I can tell you about the summer. On April 26, I don’t know.”