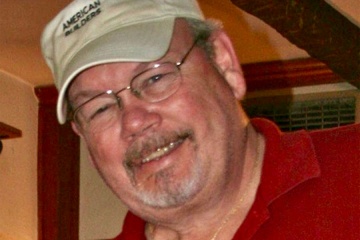 In the warm embrace of loving family members, Roger Edward Cawthon, 67, departed this world on Tuesday, May 12, 2020. He was born June 12, 1952, in Newport News, VA, where he spent what he always referred to as a “joyful childhood.” He graduated from Ferguson High School (NN) and received an appointment to the U.S. Military Academy at West Point from which he graduated in 1975.

He served in the United States Army before going to work for Ford Motor Company as a design and test engineer. Soon, however, Roger’s love of sports, his exuberant personality, writing skills, gift for visual imagery and broadcast-quality voice led him to a career as a sportscaster at the then-brand new CNN in Atlanta, GA. His broadcasting career provided unique opportunities that became some of the highlights of his life: he played a round of golf with the legendary Jack Nicklaus, boxed a few rounds (very few, he always emphasized) with heavyweight champion Evander Holyfield, and partied with James Brown, even getting to sing “Proud Mary” onstage once with the iconic “Godfather of Soul.” Wanting to be closer to family and friends in his hometown, he moved back to Hampton Roads in 1981 where he became the Sports Director at WVEC-TV.

In 1982, he reconnected with a former high school friend, Kathy Jenkins, who he soon realized was the love of his life. They married in 1984 and were “joined at the un-hip” for 36 years. In 1993, Roger opened American Builders of Virginia , Inc., which he managed until his retirement in early 2020.

Giving and generous, Roger was a quiet servant of his God. He lived his faith through his actions. He was a cheerful, happy man whose greatest joys in life included seeing other people happy, classic rock ‘n roll (the louder, the better) and classic cars, rescuing small, furry creatures, watching the sun set over the Albermarle Sound from his back deck, and most of all, his family. He loved to laugh and was quick with a joke, sometimes appropriate, sometimes not. If a joke fell flat, he just grinned and said, “Some of these are just for me.”

Roger survived a life-threatening cancer in 1995. He and his wife (also a cancer survivor) ran the Marine Corps Marathon in 1999 to celebrate their survival and to raise funds for the Leukemia & Lymphoma Society. He became an active volunteer with the American Cancer Society, chairing the Todd Stadium Relay  For Life (Newport News) for two years and helping to create the Darling Stadium Relay For Life in Hampton for which he received the Board of Trustees Award for Outstanding Achievement from the American Cancer Society. He then spent 10 years on the road with his wife, traveling to cancer survivor events and medical and pharmaceutical conferences around the country as a keynote speaker spreading his message of fighting cancer with hope and humor and the spirit of a warrior. Like so many warriors who fall on the battlefield, Roger was taken by the very enemy he had devoted so many years to fighting.

Roger would love to be remembered first and foremost through acts of kindness to others including total strangers. If you are so inclined, donations to charities that support children with cancer and their families, first responders who fall in the line of duty and their families, and no-kill animal shelters would also be ways in which he would have loved to be remembered.

Roger was a huge Eagles fan, and a favorite song by that band was “Hole in the World.” There is, indeed, a hole in the world tonight, and it’s shaped like Roger Cawthon.

Due to the COVID-19 pandemic, a public gathering to celebrate Roger’s life will be held at a later date.

Twiford Funeral Homes, Outer Banks is assisting the family with arrangements. Condolences and memories can be shared at www.TwifordFH.com.