On the eve of visitors, Dare’s top health official talks about preparations and expectations 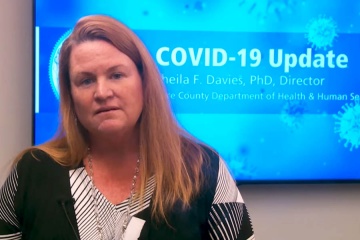 It will certainly be a unique situation beginning on May 16 when tourists are allowed to enter an Outer Banks that is operating under social distancing guidelines in the midst of a global pandemic. To date, Dare County has recorded 21 cases of COVID-19 with only one death, but no one is sure what will happen when the population of the county swells with visitors.

One person at the forefront of managing the county’s public health response to the outbreak is the director of the county’s Department of Health and Human Services, Sheila Davies. And on the eve of the visitors’ arrival, the Voice asked Davies to talk about her expectations and the county’s preparations.

Q: Do you anticipate seeing some uptick in COVID-19 cases when the Outer Banks experiences an increase in population when the visitors arrive?

Davies: We’re anticipating an increase in cases – one, related to the uptick in population, but also related to the easing of restrictions [determined by Governor Roy Cooper]. That’s going to lead to more interaction with individuals and that’s how the disease is spread…There’s a bunch of different models out there that we’d have looked at…but they’re just models…The bottom line is we’re anticipating an increase, and what the flattening of the curve has done in North Carolina and in Dare is allow us to make sure that we’re as prepared as possible, including the number of contact tracers we have available and also Personal Protection Equipment [PPE].”

Q: You mentioned contact tracing and PPEs. What is the situation with those as they relate to Dare County?

Davies: Masks are now more readily available as needed. The gloves are fine, the face shields have improved. The biggest shortage we still see right now is with respect to gowns and getting our gown requests filled. We work through State Emergency Management on requests, but most of the orders that we’ve put [in recently], we’re getting…That’s not a Dare County issue. That’s the nationwide and state issue with the shortage.

As far as contact tracers, right now we have about six active tracers who are working, but we have about 50 we could draw upon as needed. The state said that they only thought we would need six, but we anticipate that need to be even higher, and possibly it’s because of the level of contact tracing that we do. Requirements during a communicable disease investigation are to notify any direct contacts, they are immediately considered a PUI [Person Under Investigation] and we inform them of that and talk about what that means. We go a step beyond that and actually monitor PUIs daily with check-ins from our contact tracers and our staff, either a nurse or trained contact tracer.

Q: As far as testing capacity, will that increase along with the increase in [summer] population?

Davies: There’s a lot of confusion out there because the public is hearing mixed messages. At the federal level, they’re hearing that anyone who wants testing can get it and they can have access to a free test. But that’s something that has not reached the local level. I would love to see that.

Right now, I’m looking at opportunities to partner with some private lab companies to see if they would be willing to do some drive-through collection sites for individuals who are interested in getting testing, and we’ll know more within the next week or so. Unfortunately, that would not be free testing. I think there may be programs in place to help anyone who couldn’t afford testing…We don’t have the federal funding support from DHHS to do that, it would just be something we’re locally working on setting up.

The other thing that’s been really confusing for the public is the evolution of testing. When testing was first made available back in early March, the DHHS guidance at the time was you had to be symptomatic and have traveled to an area where there was an outbreak. That guidance later changed to remove the travel stipulation, but you had to have all three COVID symptoms – the fever of 100.4 or greater, the cough and respiratory illness. And then more recently, the guidance was expanded to say that any testing can occur by a provider if COVID-19 is suspected. Suspected would mean you have some symptoms, maybe not all of them, but some symptoms – and the symptoms [list] expanded.

Last week, guidance was expanded to [allow providers to test anyone in cases] where COVID-19 is suspected, and also to test someone who is a direct contact with a laboratory confirmed positive case…People need to have some symptoms related to COVID before they’re going to test.

[Providers] are not set up to do the mass widespread testing…I’m sensing the public is a little frustrated that it’s not more widely available… But we are absolutely ensuring that folks who need [testing] are able to get it if they meet the criteria.

Q: What is the current situation with critical care and ventilators at the Outer Banks Hospital?

Davies: They don’t have an ICU [Intensive Care Unit], but they do have ventilators because they do certain procedures and surgeries where ventilators are required. Their role, if there is a critical patient related to COVID-19, would be to basically evaluate, stabilize and if that stabilization requires a ventilator, that’s the thing they would do until that individual can be sent to a facility that can provide a higher level of care.

If [the Outer Banks Hospital] has someone who comes in with a heart attack, they are going to stabilize that patient and get them, whether it’s by helicopter or ambulance, to the higher level of care. That’s the same they would do with a patient who’s dealing with complications of COVID.

Q: If there was a surge in cases, could you estimate how many tests you could administer in Dare County in, say, a 48-hour period?

Davies: I would say we would mobilize whatever resources and support we could to ensure that whatever number of people needed to be tested were tested. And I can draw on our previous experience when we had the concern at Peak Resources and within a matter of two days, we tested just under 200 individuals…We tested all the residents and all the staff. We really put our resources together with the health department, the state, Outer Banks Medical Group and the hospital. If it was needed, we have plans in place if there’s a particular outbreak.

Q: How confident are you as we move into the summer season that people will respect social distancing guidelines?

Davies: My desire is that people will really respect social distancing guidelines and understand that it’s one of the best things they can do to keep themselves safe. The governor mentioned yesterday that he expects the three W’s [Wear a face covering, Wait six feet apart, Wash hands frequently] to be with us throughout all three phases [of re-opening], at least in some fashion. It’s not fun. It’s tough…I don’t have a way to predict how many are going to adhere to it. I just hope that the majority does and takes it seriously.”

Q: What messaging is the county putting out to drive home the social distancing message?

Davies: A couple things. Nags Head – as soon as this weekend – and then some of the other towns and the National Park Service are collaborating through the Joint Information Center to create some signage on social distancing for the different beach accesses and parks. We are going to continue to push the three W’s. And we have been in touch…with the Outer Banks Chamber of Commerce and Outer Banks Visitor Bureau and tourism board about messaging. We were strongly encouraging, and we received some indication, that the Tourism Board will be doing some type of campaign and paid advertising throughout the summer to push that information to visitors.

Q: Is there a specific number of cases or spike that the county has identified that would trigger an evacuation or tighter restrictions?

Davies: I don’t get to make any decisions for entry… I can tell you in some of the conversations we’ve had that there’s no magic number. If other restrictions need to be put in place, that’s going to be dependent on the impact of those cases and what that impact is on delivering essential services. So…if we had so many cases that it wiped out our ability to provide emergency medical services, transport and response – that could be a trigger. Or if the food industry was so depleted with staffing because of sickness that we can’t adequately staff grocery stores. Essential needs are what we would be monitoring and…not necessarily case numbers, but the sickness.  How sick are individuals and can we deliver the essential services that are needed for whatever population we had at the time?