For troubled OBX fishing industry, COVID-19 is one more blow 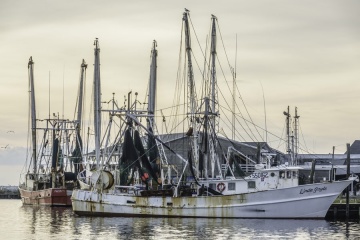 The Outer Banks’ commercial fishing industry has seen its share of problems over the past few years. Federal neglect of the Oregon and Hatteras Island inlets has caused shoaling, making it difficult for even smaller fishing vessels to reliably navigate local waterways. Big trawlers no longer offload their catch in Wanchese, resulting in the closing of most large-scale fish distribution facilities in the harbor.

At the state and federal level, increasing regulatory requirements and catch quotas, fueled in part by aggressive lobbying of elected officials by the well-funded recreational fishing industry, have caused even more commercial fishermen to leave the industry.

And now COVID-19 strikes another blow to the solar plexus of an industry that, no pun intended, can barely keep its collective heads above water.  And interviews with two local operations — of distinctly different sizes — help shed light on how the COVID crisis has affected the Outer Banks’ commercial fisheries.

Mark Vrablic of the Willie R Etheridge Seafood Company, one of the last remaining large-scale seafood distributors in Wanchese, minced no words when he described the losses created by the worldwide pandemic.

“I can’t give you exact figures, but I can safely say business in Wanchese among all commercial fishing operations is down sixty-to-seventy percent at present, and probably ninety percent in March,” he related. When pressed, Vrablic guessed the economic losses for the Wanchese operations were easily in the range of $5 to $10 million in the first quarter of 2020.

“If you look at just the Philadelphia and New York markets, they have been down sixty to seventy percent,” Vrablic said.

The market losses are across the board. Obviously, the lockdowns caused many restaurants to shut down outright, and even those that remained open and provided takeout service were not selling a lot of fish given the short shelf life and the closure of markets like the famous Fulton Market in New York City.

“Each of our buyers, including smaller distributors, supply anywhere from seven to ten or more restaurants and small seafood retailers. Multiply that out by dozens of such distributors and the loss of the large restaurants, and you can see how widespread the market loss is,” he explained.

Particularly hard hit were the ethnic restaurants and fishmongers in the larger northeast corridor cities. “We supply a lot of fish to Chinese and Korean restaurants and retailers and they buy a lot of species, such as bluefish and ribbonfish that aren’t purchased locally. The virus hit those communities hard and those businesses have been completely shut down,” Vrablic noted.

While the term ‘bright spots” may be too generous given the plummeting sales, Vrablic managed to find a few positives in the mix of otherwise somber news.

“The weather was bad in March, so not as many fishermen went out. Others were spooked by the projection of widespread closures, which would collapse prices.  And given the transient nature of the crews who work the fishing vessels, some operators did not want to risk exposure to the virus by working in close conditions on small boats for days at a time with people [whose level of COVID-19 exposure] they didn’t know, so they just stayed home,” he said.

As a result, prices have held up a bit on many species of fish. In addition, Vrablic said grocery stores were outperforming on seafood sales as more people were cooking at home. And even smaller seafood stores in areas like Norfolk saw a surge of business as diminished supplies of meat and poultry at chain grocers forced buyers to look elsewhere for product.

“I’ve spent a lot of time working the phones to find buyers and move product where I can to those markets,” he said.

Vrablic concluded with one other positive. “For the first time in my career, self-employed people, which includes most of our commercial fishermen, were able to collect unemployment, so some of them will hopefully be able to survive the shutdowns, at least in the short term,” he concluded.

Over on Colington Island, Dana Beasley has had a somewhat different experience with his smaller operation, which seems to be holding its own.

The Beasley family has been fishing local waters since the late 19th century and Dana Beasley continues that tradition operating from a facility on family-owned land located near the ‘big’ Colington Island bridge, where he and his brothers work crab pots, shed soft shells, and shrimp during that season.

As a smaller enterprise, Beasley sells to local restaurants and seafood shops as well as making retail sales to locals who are aware the business exists. His family sells what they catch, so the operation is much easier to manage, especially in a time of crisis.

Given the smaller customer base, Beasley has been busy this season in spite of the COVID-forced shutdowns.

Right now it’s soft shell crab season and some of his primary buyers, such as Mulligan’s Grille and its sister operation, the Snow Bird Burgers and Cones drive-in, have been buying soft shells (and advertising the Beasley name in their Facebook posts to let people know it’s a locally-sourced seafood) and selling them fried, sautéed, or in fish tacos and as burger toppings.

The takeout business and his retail sales have been enough to keep things going and other clients have been buying inventory to freeze in anticipation of the phased-in return to inside dining before Memorial Day. In fact, the soft-shell crab season runs from April to June or early July, with crabs becoming more abundant as the waters warm. With restaurants allowed to open with limited capacity, the timing could be very good.

Like Vrablic, Beasley said the weather kept some crabbers off the water in March and April and the cold conditions reduced the amount of crabs available for harvest — all of which prevented a glut of crabs hitting the market at once and provided some price support.

And similar to what’s taking place in the entire commercial fishing industry, Beasley said regulations and the fact that younger generations are no longer willing to carry on a family tradition of commercial fishing continues to reduce the ranks of small-scale family operations — taking some competitive pressures off those who continue to ply the local waters.

As the country tries to reopen in fits and starts commercial fishing will begin to rebound. But the industry must still contend with the regulatory and inlet navigation issues over the long run so any support they can receive in the form of increased sales to retailers, restaurants and consumers will help an industry that constantly seems to be on life-support.

But for now, COVID is just another problem in a long series of struggles.