In the OBX events industry, hurt and hope 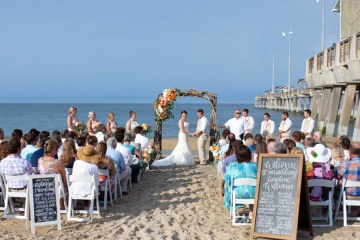 Events such as the classic Outer Banks wedding and major music gatherings (below) have been shut down by COVID-19. (ncaquariums.com/jennettes-pier-weddings)

In recent years, the “shoulder season” has increasingly become an Outer Banks success story. Driven by steady growth in weddings and music festivals like Mustang Spring Jam and the Outer Banks Bluegrass Festival, the time between March and May has been a major part of the Outer Banks’ economic success.

And then there was COVID-19. No weddings, and the cancellation of the Outer Banks Bluegrass Festival and Mustang Spring Jam.

“This is really kind of unprecedented areas that we’re into right now,” said Lee Nettles, Executive Director of the OBVB. Newly unveiled March 2020 numbers show occupancy revenue down 62% from the same month last year and meals revenue down by 47%, with Nettles noting that the April numbers are “probably going to be worse.”

Interviews with those working in the events industry highlight the economic damage done by a pandemic that has shut down virtually all of the business this year.

But there is optimism for the future, based on an anticipated robust rebound of the wedding industry and a faith in the resiliency of those who earn a living through events.

Ashley Earnhardt, incoming president of the Outer Banks Wedding Association (OBWA), sums up the state of her business right now.

“I know that the vast majority of everyone’s weddings locally have been postponed,” she said. “So obviously everything in April, and the first half of May was a wash,”

The effect of the wedding cancellations will ripple throughout the local economy. Hard figures are difficult to find, but including lodging, food and associated services and weddings, a conservative estimate is that they pump over $100 million into the local economy. Almost every wedding includes a photographer, florist, caterer, officiant and event coordinator to bring everything together.  And suddenly no one is working.

It isn’t only weddings that have been affected by COVID-19 restrictions. Mike Dianna, owner of Bearded Face Productions, has cancelled two events this spring. His 9th Annual Mustang Spring Jam would have run on Saturday and Sunday, May 16 and 17. An earlier event, An Evening with Mojo Collins, scheduled for March 14 at Roanoke Island Festival Park was also cancelled.

For Collins, who has been involved in music since he was in the U.S. Air Force in the 1960s, it was particularly painful. The headline performance with his band Triple Vision was something he had been working toward for some time.

“It hurts, man,” he said. “I’d been working on this for twelve years. Maybe we’ll be able to do this next spring. I’ve been doing this [playing professionally] for six decades. I’ve never seen anything like this.”

In addition to promoting festivals and music, Dianna has also been the organizer of the Outer Banks Food Truck Showdown. The Showdown, scheduled for May 31, has been moved to September 13, but he acknowledges that date is tentative.

“At this point, I think everyone’s going be speculating. And anyone who tells me that they’re not, I think you’d have to view that with some skepticism to say the least,” Dianna said.

What the Outer Banks is experiencing is part of a broader phenomenon. For local musician and performer Ruth Wyand, the effects have been dramatic. She continues to give lessons via Skype and similar online platforms, but her live performances have been cancelled and none are scheduled.

“I’ve lost ninety percent of my income,” she said. “I’m working with eight different bands, and my [Mustang Music Program] students, the bands and gigs. This year especially, I’ve finally got into some festivals out of town in Florida and North Carolina. They cancelled those.” 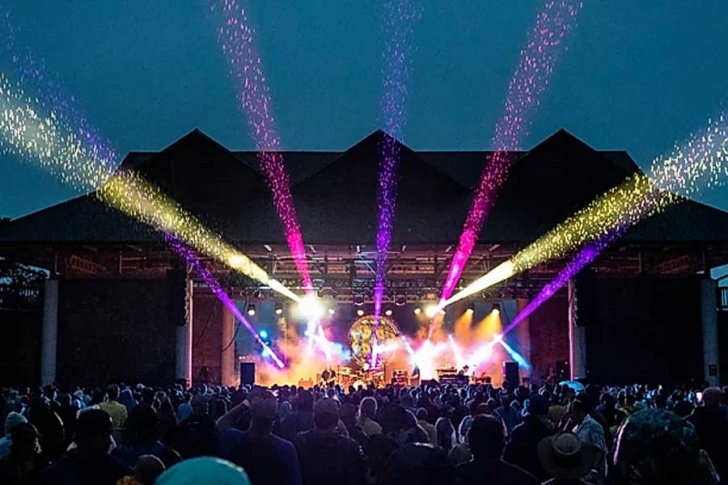 With North Carolina moving to Phase Two of its reopening plan, the updated guidelines would seem to have little or no effect on events — and the music that is so much a part of local events. With restaurants limited to 50% capacity and outdoor gatherings limited to 25 people, Dianna does not believe it is economically feasible to book acts at this time.

“I have clients that…are really eager to try to get their entertainment schedules back and one of the big things I’ve had to explain to them was, well, you’re not going to get the return on your investment,” he said.

Reasons for hope: Rescheduling and resilience

There is optimism, even in the midst of an unprecedented downturn in weddings, events and entertainment on the Outer Banks.

At the OBWA, Earnhardt points out that while there have been many wedding postponements, there have been very few cancellations — meaning people are rescheduling those special celebrations.

“The vast majority of weddings locally up to this point have been postponed. There were some cancellations here and there…but for the most part it was a lot of postponements,” she said.

According to Earnhardt there is more than one reason for the low cancellation rate, although most of it is the mystique of the Outer Banks.

“I think that the majority sentiment is that they had planned…this dream Outer Banks wedding, and for most of them, it’s the vacation of a lifetime. It’s not like they want to get married back home in Ohio or Pennsylvania,” she said.

There is a financial consideration that she acknowledges also plays a role.

“I think that most women sign contracts, so contractually you’d have to break contracts [and] lose deposits. Can we get married sooner or do we keep our dream wedding, not lose thousands of dollars, and just postpone?” she added, noting that rescheduled and previously scheduled weddings will make for a year like no one has seen before.

“I think we’ve all come to terms with 2021 might be a little bit weird because we have had so many postponements. There’s so much interest from many of our clients that has now shifted,” she said. “Things are even busier for next year, but not because of popularity, but because of fitting in 2020 brides and 2021 brides into one calendar year.”

Earnhardt also points out that because many businesses that are part of the Outer Banks wedding industry are so small — sometimes consisting of one person — there is the hope they can be resilient enough to survive this challenge.

“You know, one strong feeling about this is I feel like the entertainment world, the live music business event business, is very resilient,” he said.

It is a thought that is underscored by an observation from the OBVB Nettles.

“We’ve got a lot of smart industrious people and what’s the saying, ‘Necessity is the mother of invention?’” he said. “I think that’s kind of where we are. People are scratching and clawing to survive, but that makes you reassess the ways in which you can do business. I think that new opportunities are gonna come out of this. It obviously hurts a lot. But I am optimistic for the longer term.”