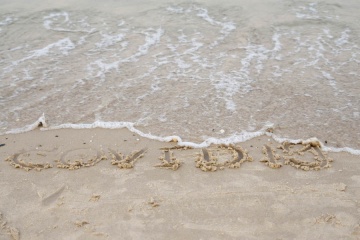 Dr. Chris Lalik, who lives in Barrie, Canada, made a $3,200 down payment for a rental home he booked in Salvo for the week of May 16. While visitors were allowed back on the Outer Banks by then, Lalik had another problem. Due to the COVID-19 pandemic, the border between the U.S. and Canada is closed to non-essential travel.

Last fall, Victoria Harriston, of Williamsburg, VA and her group of family and friends from along the East Coast made a $5,200 down payment on a beachfront house rental. But seven people in that group are over 65, and five have underlying medical conditions. When COVID-19 hit, they tried to reschedule their May 31 booking, but were told their best option was to cancel and hope their week got re-booked so they could be reimbursed.

In accordance with the North Carolina Real Estate Commission’s (NCREC) position, would-be visitors to the Outer Banks were entitled to refunds for payments on rentals for the period between mid-March and mid-May when the area was shut down to visitors. Conversely, many visitors who had reservations after the May 16 re-opening were ready and eager to come down for a long-awaited vacation.

But there are also more complicated situations — like those involving Lalik and Harriston – involving money paid for a vacation that won’t or can’t be taken after the bridges opened. And in the unprecedented situation created by the COVID-19 outbreak, some property management companies say they are working with the property owners to handle matters like these on an individual basis — while noting that the decision is firmly in the hands of the vacation rental owner.

Monica Thibodeau, owner of Carolina Designs, said that, “As a company owner, I’m trying to navigate this and get through these on a case by case basis…[The rental properties] are individually-owned homes and each homeowner’s needs and abilities to accommodate a request are different.”

Doug Brindley, owner of Brindley Beach Vacations, said his company has had 800 cancellations since the announcement of the May 16 opening. If guests want to book for a different time, his company asks the homeowner if they are willing to do that. “We’re not allowed to make that decision,” Brindley said. “If the owner allows that and the guest says yes, we make that happen.”

The Outer Banks open and the rules change

The NCREC ‘s legal position — stated in a March 19 letter and clarified in early May — is that the state’s Vacation Rental Act requires brokers and owners to refund any and all funds when access to vacation rental homes is obstructed – which was the case when the area was closed to visitors.

In a related situation, about 200 people who booked vacation rentals for the period during the bridge closure have formed a Facebook group in an effort the get the refunds apparently owed to them by one Hatteras property management company.

But as NCREC Legal Counsel Janet Thoren told the Voice, once the Outer Banks opened to visitors, “there’s no provisions for refunds. They would be contractual in nature so they would have to look at their lease agreement, and then go to their insurance provider, if they did purchase travel insurance.”

With the May 16 opening, vacationers who may not be able to travel or consider it to be unsafe due to potential virus exposure, have had to make the difficult decision whether to cancel and potentially lose thousands for dollars – or keep their plans to travel to the Outer Banks.

Outer Banks Association of Realtors (OBAR) CEO Willo Kelly said the biggest concern she’s heard from people with upcoming vacation reservations goes like this: “I have people coming in from all over different places where there are hotspots of COVID-19 and I don’t feel safe and I don’t feel comfortable.’”

In response, Kelly said, her office has been pointing to NCREC’s position that refunds are not due if the county is open, acknowledging that it’s not the most welcome news. “The only thing I can say back was, ‘If we are deemed fit, inhabitable and accessible, then the responsibility of honoring your lease is on you.’ That’s a hard pill to swallow,” she said.

That’s the case with Lalik, the Canadian doctor, who expressed frustration after trying to contact the real estate company to resolve the situation, something that still hasn’t happened.

“We looked forward to getting some warmth before the summer,” he told the Voice.  “I’m sure I’m not the only one, I’m sure there are lots of families that are stuck in this and you know, this is bad PR,” he asserted.

Harriston said her group was eagerly anticipating an Outer Banks vacation, but once COVID-19 started spreading, her niece, Nekole Johnson, began contacting the realty company. Johnson said she wasn’t able to communicate with the company until early May when she was advised the owner was unwilling to change the reservation and that her best option was to cancel in hopes the property could be re-rented and she could be reimbursed. As of May 26, Johnson said the property was still listed for rent and she hadn’t heard back from the real estate company.

“This just seems unfair,” Johnson asserted. “This seems like it’s profit over people, over safety. We don’t think it was fair that it wasn’t taken into consideration as to why we didn’t feel safe front a health standpoint.”

Thoren said the NCREC has received a number of complaints regarding grievances over vacation plans during the pandemic, and North Carolina Department of Justice Communications Director Laura Brewer told the Voice that her department has received 53 vacation-related complaints from the Dare County area.

‘There was a lot of confusion’

With the uncertainty surrounding when the Outer Banks would open to visitors, property management companies, renters and owners were left in limbo awaiting that decision.

Monica Thibodeau of Carolina Designs said the May 16 opening took her by surprise.

“It was a surprise for me personally, just based on everything I thought I understood,” she recalled. “But again, we didn’t know until we knew, and we knew ten days out, so that was really keeping us busy with just keeping everyone informed.”

Once the opening occurred, she said, “I call it like a seesaw where [the obligation] changed from the homeowners’ responsibility to the guests’ responsibility. Plus, with the size of the homes that we manage, and people coming from everywhere, there was lot of confusion, there’s fear. There’s a drop out of groups due to job loss” or people whose jobs are on the frontlines of battling the pandemic.

For his part, Doug Brindley of Brindley Beach Vacations, acknowledged that there are some people who should not travel during this time based on health risks. “But that doesn’t mean that everyone else should make them whole because they are unable to travel,” he said.

If guests want to cancel and get their money back, Brindley noted that there is no responsibility on the part of the owner to do that.  “However, we are all booking like crazy,” he added. “So, there is a very strong possibility that if you go ahead and give me more than two days’ notice and you cancel your week, we will likely sell it and you’ll get a refund.”

Kelly said OBAR has been fielding calls related to vacation rental concerns during the pandemic for roughly six weeks. She acknowledged: “It’s just been very trying, and the unknown makes it even more challenging.”

One by-product of the rental refund issue that is still to be resolved is the situation with the Facebook group formed by people who are trying to get refund from the Surf or Sound Realty Co. on Hatteras Island.

One member of the group, Jessica Somers, along with several others who emailed the Voice, said they are frustrated, asserting that the real estate company hasn’t adequately communicated with them and that they still haven’t received refunds for down payments and deposits from vacations during the bridge closure. Surf or Sound did not respond to multiple attempts by the Voice to reach them for comment.

Advice from the experts: NCREC’s Janet Thoren says that if consumers purchased travel insurance, they should check with the company to determine if their policy covers their circumstances in the pandemic. Laura Brewer, of the North Carolina Department of Justice, said that those with complaints who are renting through a licensed real estate broker first should contact the NCREC to file a complaint. If the complaint, however, is regarding a travel insurance company or about an online rental platform, they should contact the NC DOJ at 1-877-5-NOSCAM or ncdoj.gov/complaint.