Event intended as memorial to victims of police violence 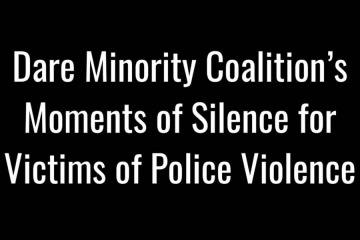 As protests over the killing of George Floyd spread throughout the country, the Dare Minority Coalition has received a permit from the Town of Manteo to organize a peaceful gathering on June 9 to silently honor those who have lost their lives this year to police violence.

Coalition Executive Director George Carver told the Voice that the gathering, which will begin at 5 p.m. along the sidewalks of U.S. 64, is being held with the support of the Manteo Police Department. A moment of silence will be held to honor each of those individuals.

“This is going to be a peaceful demonstration…to acknowledge those who actually passed from police violence this year, which at the moment is thirteen or fourteen people,” said Carver, noting that their names and photos will be displayed during the demonstration, along with “Black Lives Matter” signs.

The event’s announcement on social media says: “Bring your signs. Bring your passion. Bring your families to show we can all live peacefully and lawfully together. Please, no drama, fighting or destruction of property. This isn’t that type of event. It’s in memorandum to all those who have departed this life unnecessarily. This is about honoring them.”

Carver said organizers originally anticipated that about 100 people would attend the event, but based on the initial response, he anticipates there could be as many as 300 to 400 people in attendance. Participants are asked to bring signs and socially distance along U.S. 64 in the area of Chelsea Mall and the College of the Albemarle campus. That includes wearing masks and maintaining a distance of six feet from one another to avoid coronavirus spread.

Carver said speakers will include himself and possibly Manteo Police Chief Vance Haskett or Town Manager James Ayers as well as Dare County Sheriff Doug Doughtie. Other members of the community may also be asked to offer remarks, he said.

“Everybody’s on board and I talked to Doug Dowdy this morning as well and we got their support,” Carver noted.

“We want to do something peaceful, on a positive note, to acknowledge those that lost their lives,” he said, noting that to avoid any “negative intentions,” the demonstration will be wrapped up by nightfall.  The event is expected to last between an hour and an hour and a half, he added.