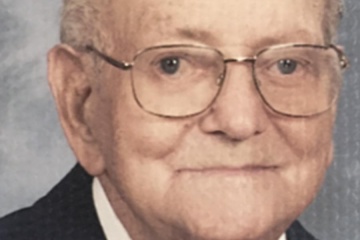 Ernest Melvin Winslow, 96, of Elizabeth City, NC died June 1, 2020 at his residence.  Born in Belvidere, NC on March 5, 1924 to the late Charlie T. Winslow and May White Winslow, he was the widower of Mildred Trueblood Winslow who preceded him in death in 2009.  He was a building contractor specializing in custom homes.  He also provided many repairs and remodeling jobs in his church and parsonage of the Evangelical Methodist Church.  He was an integral part of the choir and served as Sunday School Superintendent for forty-seven years and was a Gideon.  He maintained a perfect Sunday School attendance for that entire forty-seven years.

Due to the corona virus, a private family graveside service will be held on Friday, June 4, 2020 officiated by the Rev. Sean Scribner.  Burial will be in West Lawn Memorial Park Cemetery.  In lieu of flowers, memorial donations may be made to the Evangelical Methodist Church Building Fund, 820 Okisko Road, Elizabeth City, NC  27909 or www.ecityemc.org or to  Gideons International at www.Gideons.org.  Twiford Funeral Home, 405 East Church Street, Elizabeth City, NC is serving the Winslow family. Online memorial condolences may be sent to the family at www.TwifordFH.com.