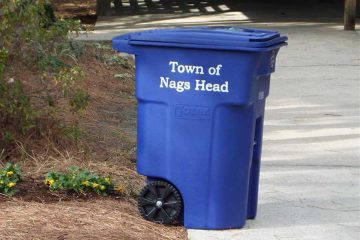 After temporarily suspending its curbside recycling program last month due to rising costs, contractual issues and an uncertain recycling market, the Nags Head Board of Commissioners agreed at its June 3 meeting to aggressively pursue a vendor to provide a subscription program for individual property owners.

Town Manager Cliff Ogburn updated the board on staff efforts to secure a vendor for such a program, noting that Bay Disposal would consider committing to the town if it could compile a list of at least 300 potential subscribers. He estimated the monthly cost per household would be between $15 and $25, with Bay Disposal providing its own carts.

“We are hopeful we will be able to put a subscription program into place sooner rather than later, but it is likely going to take some time,” Ogburn told commissioners.

The commissioners, who received significant feedback from the community after suspending the program earlier this spring, urged staff to quickly move forward with compiling a list of interested residents. “The sooner we get a portal where we are taking the names of people interested in a subscription service, the better,” noted Mayor Ben Cahoon.

Suspension of the recycling contract with Bay Disposal has translated into a $168,344 savings for the town for Fiscal Year 2020-2021 and while uncertainty about lost revenue during the COVID-19 pandemic was a consideration, Nags Head and other local municipalities have been wrestling with the future of their recycling programs as the costs have skyrocketed in recent years.

Along with those steadily increasing costs, Bay Disposal in December of 2019 also notified municipalities that the recyclables were being transported to a waste-to-energy facility in Portsmouth Virginia because they could not find a purchaser for recyclables.

In a memo to commissioners, Ogburn, who will be leaving his Nags Head post to become Southern Shores Town Manager on July 1, acknowledged the numerous comments from residents and property owners on the issue.

“Some comments reflect a strong desire to maintain the Town’s curbside program and continue to absorb the costs within the town-wide tax base,” he asserted. “Others believe that, largely because of the problems that the Town has experienced associated with costs and lack of bona fide processing options, the program should be offered on a subscription basis.”

Ogburn said it was important to point out that the town has not cancelled the recycling program, but rather suspended it because of a number of issues, including budget considerations and contractual issues that could not be worked out in time for the summer season. He said that staff and the board have committed to revisiting the possibility of a program again in the fall.

Also on June 3, the commissioners agreed to move forward with the formation of a Nags Head Reduces, Re-Uses, and Recycles Committee, which would be made up community members charged with developing a campaign to inform residents and visitors about the current status of national and local recycling industries and the history and challenges of Nags Head’s recycling programs as well as focus on spreading awareness about other recycling options in Nags Head.

Ogburn said the committee could serve as a resource as Nags Head considers its next steps when it comes to recycling initiatives and programs.