WHAT TO WATCH ON TV
Stream On: Three pirate shows, all rated Aargh! 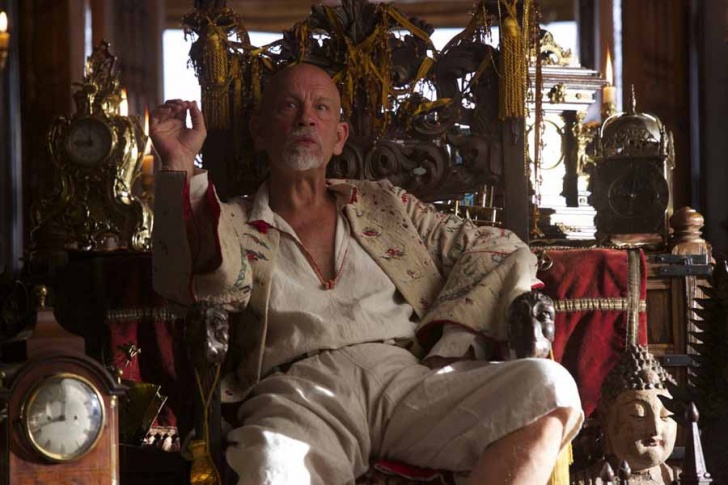 John Malkovich chews up the scenery as Blackbeard in Crossbones. (IMDb.com)

In 1718, Edward Teach, the pirate popularly known as Blackbeard, was killed off Ocracoke Island, becoming an icon of the Outer Banks. Much fiction has been generated from his life; here are three shows in which he stars, or appears.

CROSSBONES (Amazon.com; on demand on Prime Video and other services) 2014 [TV14]

The brainchild of Neil Cross (Luther), James V. Hart (Hook), and Amanda Welles, Crossbones is an adaptation of Colin Woodard‘s book The Republic of Pirates, in which Blackbeard (John Malkovich) presides over the island of Santa Compaña, home to pirates, thieves, and cutthroats. The British Empire believes Teach dead, but he is in hiding, calling himself “Commodore.”

Tom Lowe, a British spy, receives a mission from his commander William Jagger—kill the “Commodore.” According to Jagger, the man he killed eleven years earlier at Ocracoke was not the real Blackbeard but a double. Lowe poses as a surgeon aboard the HMS Petrel, a ship bound for England that is attacked by pirates looking to steal a prototype of an important navigation device called the longitude chronometer and its inventor Frederick Nightingale. And that’s just the first episode.

With characters called Wild Man, and antics such as the trepanning of a paranoid Blackbeard’s skull, and scripts by Neil Cross, the ten episodes of Crossbones are every bit as entertaining as they might sound. Here’s the NBC trailer. 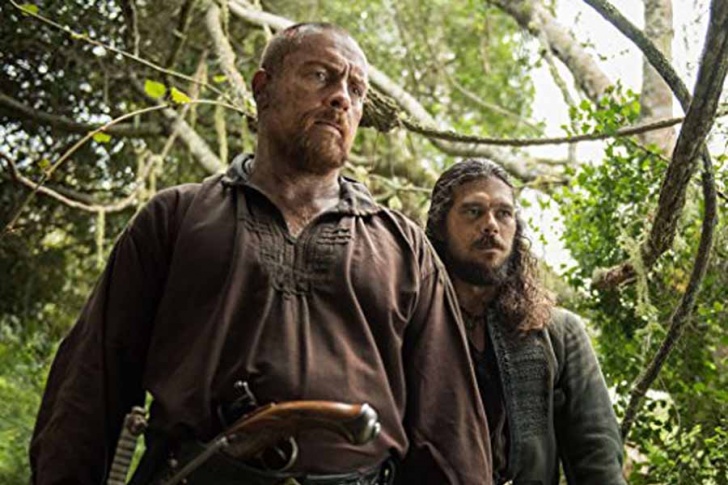 Captain Flint and John Silver are up to no good in Black Sails. (IMDb.com)

“1715 West Indies.
“The pirates of New Providence Island threaten maritime trade in the region.
“The laws of every civilized nation declare them hostis humani generis. Enemies of all mankind.
“In response, the pirates adhere to a doctrine of their own…war against the world.”

So begins Black Sails, a prequel to Treasure Island that opens with a pirate attack on a three-master. The ship’s cook tears a page from the log and hides it, before it ultimately lands in the possession of roguish John Silver, who signs on with the pirates. Pirate captain Flint believes the missing log page holds the clue to the whereabouts of a Spanish treasure ship.

This plot device intersects with a threatened mutiny aboard Captain Flint’s ship, one of many based on the island of New Providence, comparable to the Santa Compaña of Crossbones, a “republic of pirates.” Many historical pirates are name-checked, including Blackbeard in season three. The business of the island is described, with Eleanor Guthrie, daughter of the island’s most successful merchant, coordinating attacks and finding buyers for stolen booty while wrangling the pirates.
Here’s the first trailer for this delicious Starz series. 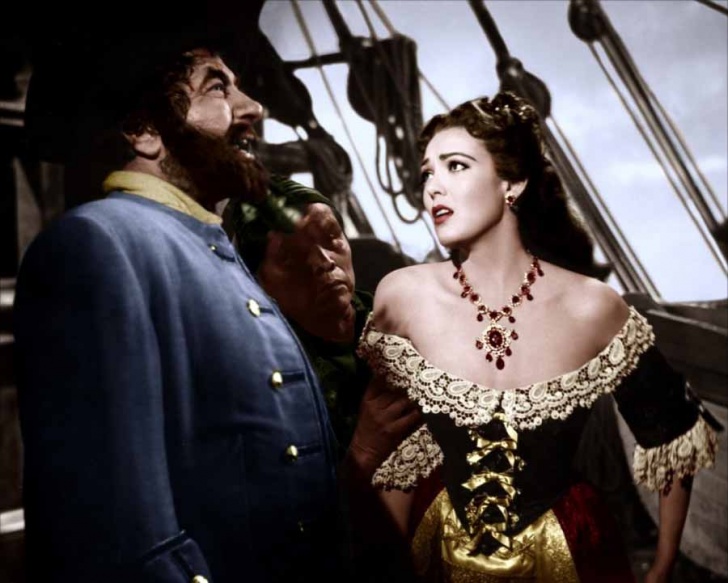 This colorful Raoul Walsh swashbuckler lays its escapist intentions out right after the opening titles: “The meeker the man, the more pirate he/Snug in his armchair, far from the sea,/And reason commends his position:/He has all of the fun and none of the woes,/Masters the ladies and scuttles his foes,/And cheats both the noose and perdition!” –‘The Armchair Pirate,’ Anon.

The film follows British Navy Lieutenant Robert Maynard, who sets out to earn a reward by proving that privateer Henry Morgan also engages in piracy.

Maynard poses as a surgeon on board the ship of pirate Charles Bellamy, who he believes is in league with Morgan. Once Maynard and fellow spy Briggs come on board, they discover that the pirate Blackbeard has murdered Bellamy and taken over as captain. Maynard, however, remains fixed on finding Morgan.

Between Robert Newton’s ecstatic delivery of lines like “Arrgh! A fiery wench, then!” and minor roles filled by William Bendix (The Life of Riley) and Irene Ryan (The Beverly Hillbillies), this beautiful film is tailor-made for a bucket of popcorn. There are sailors hung from yard-arms, cannon duels, kidnapped ladies, and mutinies planned, all as it should be. Here’s a trailer.