Are we following the three W’s? 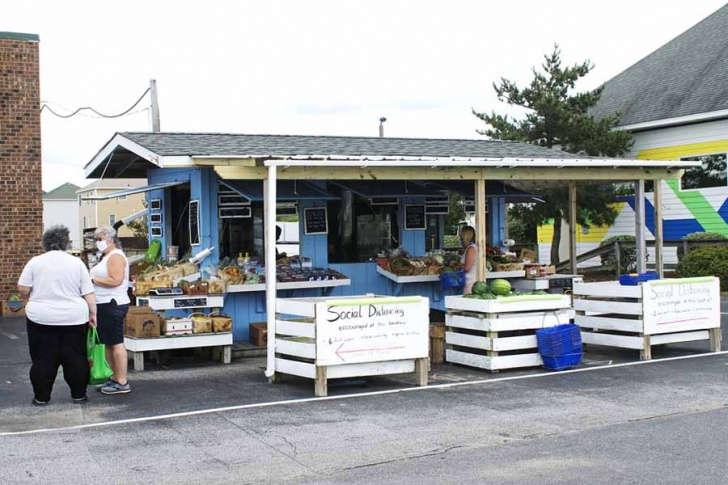 Heeding the three W’s at the Tar Heel Too produce stand. (Kip Tabb)

On OBX, use of face masks varies widely

The Outer Banks has reopened and license plates from New York, Pennsylvania, Ohio and Virginia are once again common sights on local highways and roads.

It almost seems as if life has returned to normal — except that it has not. This past week there have been four new cases of COVID-19 reported in Dare County, the first positive tests for the virus since May 14.

In these days of the pandemic, the central public health message has become observing the three W’s – Wear a cloth facing covering, Wait 6 feet apart and Wash your hands often.

The impact of those guidelines can be seen traveling in many places on the Outer Banks. Six-foot markers are everywhere, urging customers to adhere to social distancing guidelines. Signs outside retail stores indicate the maximum number of customers allowed in the store at 50% occupancy. Some storefronts display messages requiring customers to wear a face covering.

Of all the issues related to slowing the spread of COVID-19, the wearing of face masks is the most conspicuous. It also appears to be the most polarizing. According to the county website, “Individuals in Dare County are encouraged to wear a mask or cloth face covering if they will be with other people.”

For this story, the reporter visited a number of retail stores from Nags Head to Corolla. While that represents a small and very unscientific sampling, it is fair to say that the use of face masks is inconsistent and varies widely.

In a May 26 video released by the county, Dare County Health and Human Services Director Sheila Davies told about a trip by her family to an ice cream parlor that was postponed after her son saw a long line of people waiting and “not social distancing or wearing face coverings.”

In an email to the Voice, Davies, the county’s top public health official, stated that, “I recognize and am concerned that some people are not practicing the three W’s and are putting themselves and others at risk.”

Asked if her department gets complaints about people or businesses not following public health guidelines, Davies responded that, “We have received a number of emails about people not wearing face coverings and a couple about concerns over cleaning/disinfecting practices.”

North Carolina and Dare County recommend the use of face coverings, but do not require them. And if they were required, enforcing something like wearing a face mask is virtually impossible, noted Kill Devil Hills Police Captain John Towler.

“It would be an extraordinarily difficult situation…if people weren’t wearing them,” he said. “What’s a good comparison are fireworks on the Fourth of July,” he said. “There’s a law about fireworks that states people can’t shoot fireworks. But so many people are shooting off fireworks, that it’s very difficult to enforce that. So, the same thing with masks.”

Towler does point out that if a business has a policy that face coverings must be worn and a customer who does not comply is asked to leave and refuses, “it then becomes an enforcement matter.” 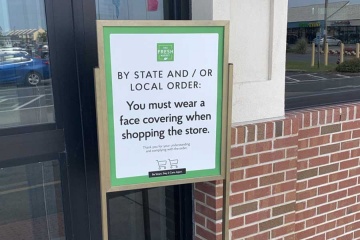 A sign of the times at Fresh Market in Nags Head. (Kip Tabb)

At the Fresh Market in Nags Head, the sign by the entrance reads: “You must wear a face covering when shopping in this store.” Inside, employees and shoppers were complying with that rule.

Ed Goninan at the Tar Heel Too produce stand in Kill Devil Hills has his whole family helping this summer. There’s a sign at the front of the stand saying, “Social distancing encouraged at this location,” and customers are greeted by his wife who courteously but firmly indicates that face masks are required.

During two visits to the Kitty Hawk Ace Hardware store, none of the employees were seen wearing a face mask – although a staffer asserted the store is adhering to social distancing recommendations and their policies are consistent with Dare County guidelines.

Inside other businesses visited, however, most, if not all of the employees were wearing face masks.

That was not necessarily the case with shoppers. The difference between the Fresh Market where everyone was wearing a mask, the Publix in Kill Devil Hills where most were seen wearing masks, and the Corolla Harris Teeter, where a substantial portion of shoppers were not wearing masks, was striking.

Asked about customers’ wearing face masks, a cashier at Home Depot in Kitty Hawk commented: “It was a lot better before the visitors came.” 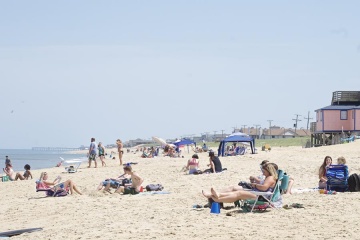 Face masks may be the most visible symbol of slowing the spread of COVID-19, but social distancing is another key component. Especially in a beach resort such as the Outer Banks, there are concerns about people gathering so close together that COVID-19 could be spread. Thus far, infamous scenes of people crowding into beach resorts like Daytona Beach or the pool party at Lake of the Ozarks, have not surfaced here.

“If we do see a large group, we, ask if they are family. If not, we ask them to separate. We haven’t had any problems yet,” she said.