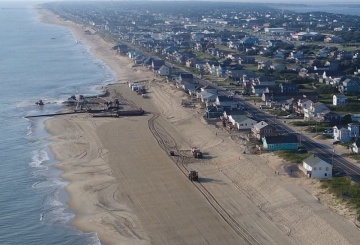 Two of the four Dare County municipalities that are expected to partner on a 2022 beach nourishment project have given the green light for the Coastal Protection Engineering of North Carolina, Inc. to move forward with the critical design and permitting steps needed prior bidding and construction of the project.

The Kitty Hawk Town Council and the Kill Devil Hills Board of Commissioners both unanimously approved a contract with the Wilmington, N.C.-based firm on June 8, while the Duck Town Council is expected to take up the contract on June 17 and Southern Shores Town Council will hold a public forum on June 16 before committing to the project.

Project Manager Ken Wilson told the Voice that over the next six to eight months, his firm will be providing assistance to the municipalities in the way of engineering design, environmental permitting and identification of offshore sand resources. The firm provided the same services for the four municipalities and Dare County as part their joint beach nourishment project in 2017.

“We’re going to have crews out there doing some additional investigations offshore,” Wilson noted, adding that in addition to a borrow site used for the 2017 project, there may be some areas that could have usable sand that are a little closer to the Southern Shores and Duck project.

“If we can identify those and if we can develop them into permitted borrow sites, it could potentially bring the cost of the project down,” he added. Final designs will also be drafted, taking into account any improvements that could be incorporated based on the results of the 2017 project.

As part of the 2017 nourishment project, nearly four million cubic yards of sand was pumped on 1.7 miles of shoreline in Duck, 1,500 square feet in Southern Shores, 3.58 miles in Kitty Hawk and 2.6 miles in Kill Devil Hills. Wilson estimates that the towns, working collaboratively, realize a 15 to 20 percent cost savings as well as improve the speed and efficiency in which project goals can be achieved.

“There are a lot of benefits that the four counties have seen by working together on this,” Wilson asserted. Once design and permitted are finalized, Wilson noted there will likely be a future contract in which his firm will develop bid documents and perform some construction oversight.

Beach nourishment projects are funded through a combination of funding from municipal sources as well as Dare County’s Beach Nourishment Fund.