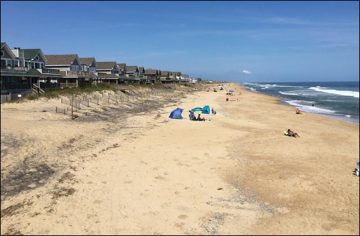 After several months of consideration, a handful of public forums, and more than 300 emails from a divided citizenry, the Southern Shores Town Council unanimously voted to move forward with a 2022 beach nourishment project during its June 16 meeting.

The town will join the neighboring municipalities of Duck, Kitty Hawk and Kill Devil Hills in a collaborative project to replenish beaches. While Southern Shores piggybacked onto those municipalities’ 2017 project to pump sand on about 1,500 feet of eroded beach near Pelican Watch, the upcoming town-wide project will be a first for the town.

Also at the June 16 meeting – after listening to complaints by residents about unprecedented traffic in residential neighborhoods over the past two weekends –  the council voted to ban left turns onto S. Dogwood Trail from U.S. 158 on the weekends of June 20 and 21 as well as June 27 and 28.

The two weekends will be in addition to three no-left-turn weekends when town law enforcement will be on hand.

While throwing its support behind the beach nourishment project, which is expected to cost between $14 and $16 million, council members opted to hold off on approving a $430,000 contract with Coastal Protection Engineering of North Carolina, Inc. until their July meeting. The firm will perform design and permitting tasks for the municipalities in order to prepare for bidding and the construction of the project.

The town anticipates receiving at least $7.6 million from Dare County’s Beach Nourishment Fund and would raise the remaining funds beginning in the Fiscal Year 2020-21 through grants, tax assessments and the creation of Municipal Services Districts.

About a dozen residents, both in attendance and over Zoom, offered their comments during the public portion of the meeting. Council member Matt Neal said that the overall feedback from property owners has been split, adding, “I think forty-nine percent pro, forty-five percent negative, and a couple undecided.”

“I keep going back to the comments or the email from a friend of mine who is an oceanographer and the [Duck Research Pier] that says that, more or less, we should be participating in a countywide nourishment project and that some sand is better than no sand. That’s kind of the tip of the scales in my personal opinion,” Neal asserted.

For her part, Mayor Pro Tem Elizabeth Morey said that while she would love to see the beach stay more natural, “the problem is that we’ve come in and made changes to the landscape so it’s not natural…I think as an elected officials, we have to look forward and I think that’s what this project is all about. It’s playing defense, it’s protecting what we have.” 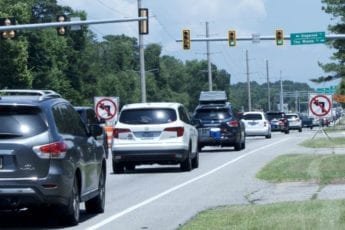 As for the issue of summer cut-through traffic, after unexpectedly large increases in traffic for this time of year, council members voted to block the left turn lane from eastbound U.S. 158 onto S. Dogwood Trail for the remaining weekends in June in an effort to gauge such a move’s efficiency in deterring vacationing motorists from using the residential neighborhoods as a “short cut” to points north.  The council voted to hire a contractor for $7,400 to oversee the closure.

While the Southern Shores Police Department will not man the intersection on the June weekends, they will oversee the planned no-left-turn weekends on the weekends of July 4 and 5, July 25 and 26 and August 1 and 2. Interim Town Manager Wes Haskett said that the North Carolina Department of Transportation would work with the town to reprogram the left turn signal during the no-left-turn weekends.

The no-left-turn events will be held from 11 a.m. to 8 p.m. and council members said additional weekends may be considered.

Mayor Tom Bennett said that although he has not been a proponent of closing the roads in the past, the past two weekends have made him reconsider. “You’re seeing traffic volumes each weekend similar to what you would expect to see on our worst Fourth of July weekend,” he asserted.

Bennett noted that in meetings on the COVID-19 pandemic, members of the Dare County Control Group, of which he is a member, did not anticipate this volume of traffic this season.

“We were relatively certain that we were going to see diminished traffic because of the fear of the virus and because people would not have the resources to take that long trip and spend those dollars…we missed it completely. I won’t say what I think it is, but it’s not good for us, it’s an unhealthy situation,” he said.

During public comment, Amanda Bartell of Wax Myrtle Trail, told council members that the traffic over the past two weekends has been “ridiculous.”

“This past Saturday, we had the bumper-to-bumper traffic in front of our home on Wax Myrtle until nearly nine p.m. Not even on a busy holiday weekend has this happened,” she said, noting that perhaps it is because rental agencies do not allow early check-ins this year due to the pandemic.

“This is a very unique time and I do not know the answer for how to fix this, but I do think you need to try something, for the residents’ sake, and the tourists’ sake. I implore you to look at all options and try something. Anything. But please don’t do nothing,” she concluded.