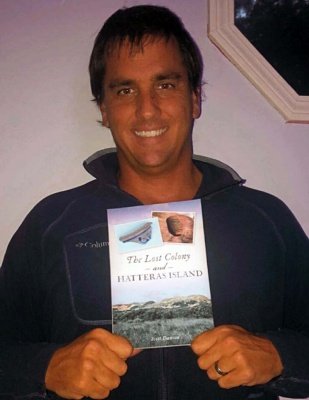 Scott Dawson believes the mystery of the Lost Colony is not really a mystery.

After more than a decade of digging and uncovering artifacts on Hatteras, island native and president of the Croatoan Archaeological Society, Inc., Scott Dawson, reveals new clues to the fate of the Lost Colony of Roanoke Island in his book, The Lost Colony and Hatteras Island, which is being released now by Arcadia Publishing.

Dawson’s 160-page book tells the story of what archaeologists from around the world have discovered beneath the surface of old Native American villages of the past, and what impacts those discoveries have on the narrative of the 1587 settlement that disappeared from Roanoke Island.

The chief message of the book reinforces one theory about the fate of the colonists — that a number of them moved to Hatteras Island (what was then called “Croatoan”) and assimilated with Native Americans there. The author adds that when Roanoke Colony Governor John White returned to Roanoke Island in 1590 and saw the word “Croatoan” carved into a fence post, he knew exactly where the colonists had gone.

In an interview with the Voice, Dawson explains how renowned archaeologists from the University of Bristol and his local organization first began searching for clues that might prove that the settlers from the Lost Colony did in fact move on to Hatteras after carving “Croatoan” onto the fence post. But It would take four years before their efforts proved fruitful.

As a native of Hatteras Island whose family roots go back to the 1600s, Dawson said he had always been fascinated with the story of The Lost Colony and the settlement’s fate. Being told the various theories that ranged from the colonists being killed by Native Americans to the hypothesis that they were lost at sea or slaughtered by the Spaniards, Dawson set out to find what he believes as the truth – that they never really were lost.

“As much as I believed the colony went down [to Hatteras], I never actually thought we were going to find it,” he asserted. “I can’t believe we found what we found. It’s kind of surreal.”

During their years of excavations, the team focused on the old Native American villages of Buxton and Frisco and to some extent, Hatteras. “We already knew where they were so, if nothing else, I knew we’d get a lot of Native American artifacts – we could put some pots together and that in and of itself, would have been good enough for me,” said Dawson, a Dare County Emergency Medical Technician who now lives in Kill Devil Hills with his wife and two children.

But beginning in 2013, as they dug through the layers, the team began finding evidence that the proved their theory that at least some of the colonists from the 1587 Roanoke Island settlement had relocated to and were living on Hatteras.

“We not only found evidence of mixed architecture of houses but also metallurgy, where they had blacksmith shops and were also working in copper and lead, and this continued right on into the 1600s,” Dawson said. “It’s hard to say how many, but a few dozen at least lived for a few decades down there in the villages and continued to work in metals.”

Dawson said many of the gun parts they discovered were a mix and match of pieces from other guns since the settlers couldn’t get any new parts. “You can see where the glass objects had been chipped in arrowheads, the copper earrings and wires had been altered into fishhooks. So, all the stuff that they brought over, it got repurposed into something more useful for living on the island.”

Dawson’s book, full of photographs, illustrates the steady flow of evidence archaeologists have gathered over the years.  “You don’t find one object and then go running to the press,” he pointed out. “Now we’ve got thousands of artifacts, so we decided it was time to share.”

Dawson said he anticipates that there are more discoveries to be made in Hatteras Village. “We haven’t really explored there as much, simply because the findings have been so profound in Buxton and Frisco. But I do think that Hatteras Village will probably end up being the same because it is already looking like that.”

The idea that the Lost Colony departed from Roanoke Island to Hatteras, or “Croatoan” as it was called at the time has always been a leading theory by historians, Dawson said. He pointed to the fact that the English had already been trading with the Croatoan tribe and living with them on and off for three years before there was a Lost Colony.

“Before John White even left the colony, they were already hand and glove with the Croatoan anyhow,” Dawson continued. “So, when he told them to write down where they were going and he saw that message three years later, he didn’t say, ‘Oh my god, what does this word mean.’ He knew exactly where that was and why they were there, and he said so.”

Referring to popular The Lost Colony production at Waterside Theatre, Dawson asserts, “We don’t get this kind of lost mythology until the play started in the 30s. That’s the first time anybody ever referred to them as lost. It didn’t make a play about a mystery — they created a mystery with a play.”

Speaking to the possibility of some resistance to these findings, Dawson said, “I think the vast majority of people will be very excited about it and I mean, it’s not an opinion. It’s empirical evidence, physical evidence of it. And the guys that dug this stuff up are some of the most world-renowned archaeologists in the world.”

As for the naysayers, he added, “There are going to be some people who put their head in the sand and don’t want to hear it… you put the truth out there and the truth is kind of like a dragon. It’ll defend itself once you let it out.”

Moving forward, Dawson said the team hopes to shed more light on the survivors’ camp that they also located on Hatteras Island, where some artifacts have been found identical to the ones found on Roanoke Island.  “That’s the future of the project — to kind of open that up a little more and see what we can learn.”