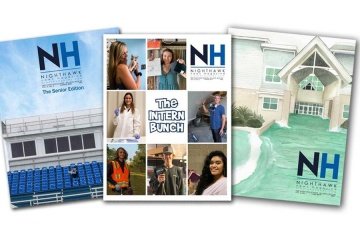 June graduate Emmy Trivette, who served as co-Editor-in-Chief of Nighthawk News this past school year, received her $1,000 scholarship from the North Carolina Press Foundation for being named an alternate in the NCSMA Journalist of the Year competition. Trivette’s portfolio was among four in the state recognized with the scholarship, marking the fourth straight year an FFHS student has either won or placed in the competition.

Students combined to win numerous individual awards in the statewide media contest. Nighthawk News Magazine and NighthawkNews.com each earned Tar Heel awards as among the best high school publications in the state.