Taco loco: There’s a new taco in town. And it isn’t as crazy as that sounds. 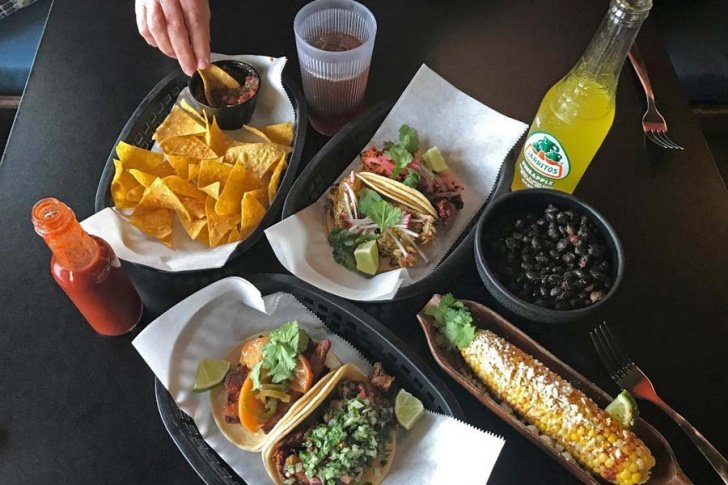 We prepared the following story and right before publishing, the Covid-19 lockdown happened. They reopened May 23rd and according to Sandra de Waal, they are doing a brisk business. They are back to their regular hours with dine-in as an option at 50% capacity. While dining in is an option, de Waal said many of their customers are enjoying the take-out service. “The more people do it, the more they get used to it,” she says. Here is our review. 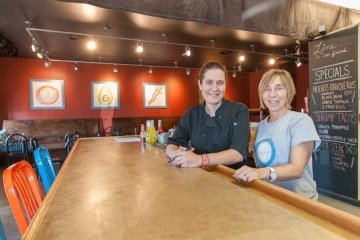 We ducked out of the chilly drizzle into the warmth of the brick-red interior; the scent of good things in the air suggested we had made a good choice. We had planned on another spot, but agreeing to do lunch in the winter here takes some research, if only to check that your destination is actually open.

Luckily for us, Taco loco was open and inviting. It occupies the space that was formerly the Outer Banks Taco Bar, in Ocean Plaza, MP4.5 in Kitty Hawk, but any comparisons between the two businesses are purely coincidental. The owners, Sandra de Waal and Susan Bowers cheerfully greeted us, and we were quickly seated with menus in hand. We asked for chips and salsa, and with the first taste; the dusting of chili and lime, and the crispness and freshness of the salsa, we understood the small fee. They don’t just open a bag here.

The menu is concise and easy to understand. Tostadas, quesadillas, tortilla bowls and sides round out the offerings, but taco is in the name and tacos are the game. We ordered two each; a roasted pork al pastor, a chicken verde and a pork belly from the menu, plus a Ribeye steak taco from the daily specials listed on the blackboard. We added black beans and street style corn cob to share. In moments we knew we had found a new home.

The tacos here are of the corn variety and the tacos are double wrapped. The doubling adds strength but if you choose, you could redistribute the contents. All were assembled to be very visually pleasing: A tumble of pickled red onion atop the roast pork, the spray of shaved radish on the chicken verde and the back-to-basics chopped onion and cilantro cresting the Ribeye, all add to the visual experience as well as the taste. And as for taste, the freshness of the ingredients comes through.

The street corn was simple and spectacular. Served piping hot, the queso fresco melds to the corn with the pepper and lime spice for a savory nibble.

On a second visit, we enjoyed the tamales, a once-per-week special. Shredded, spiced pork is wrapped in masa and steamed in banana leaves, rendering a pillow-tender tamale that is then bedecked with a red salsa and salsa verde atop spiced black beans.

Vegetarian and vegan offerings are included and special requests are accommodated. I put my meat-cravings aside and tried the kale tostada. I finished every last bit and liked it way more than I thought possible. The kale, sauteed quickly enough to be pliable but still retain its integrity, is mounted into a three stack of fried corn tortillas, (making them tostadas) and is joined with corn, refried pinto beans and completed with lime and sour cream. 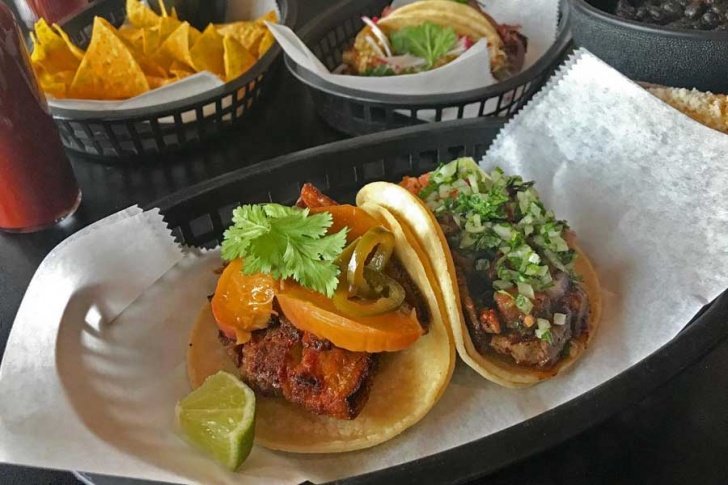 But let’s get back to that pork belly taco. Maybe being served a taco with pickled peach sounds crazy, but actually it is perfect. The pork belly is cooked in duck fat, not to the point of becoming a confit, per se, but enough to make it very rich. In the best culinary traditions, opposing tastes are often combined to achieve a dynamic outcome. Matching a tart, pepper-pickled fruit with pork belly creates something even better than the sum of its tasty parts.

Sandra and her partner Susan Bowers initially had a plan to open a taco truck in the area, but the parameters placed on mobile vendors had them turn instead to a fixed restaurant. 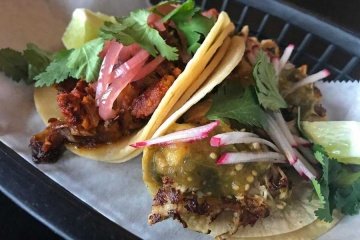 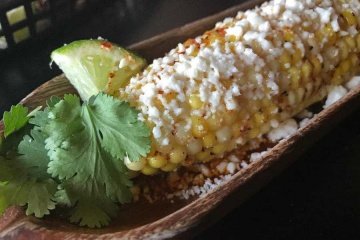 Susan Bowers grew up in South Hill, Virginia. Bowers said, “That’s where I grew up. I ended up at VCU [Virginia Commonwealth University] in Richmond. I stayed in Richmond for a while and then decided to move to San Francisco and stayed out there for twenty-two years. It took a minute for me to actually move out there. I ended up with a great job out there with a graphic design firm.”

Sandra de Waal grew up in South Africa, with no clue the culinary arts would be her future. “It’s not like my grandmother taught me or my mom taught me… my mom couldn’t cook. Dinner was like, crackers, some cheese and some salad. When I was growing up, there weren’t a lot of restaurants and stuff. It wasn’t like that. People [would] eat at each other’s homes. You didn’t go out to dinner; you’d go to someone’s house for dinner and it would always be a barbecue. Steak on a grill, no chicken, no pork. A salad, that’s what we grew up on.”

But that changed when she moved to London. “You go to London, you get a pub job. It’s a live-in and you get meals. I started as a server, but I was horrible at it, so horrible. I hated it. But I was watching the boys in the kitchen and said, ‘I want to do that.’ After a week, the manager said, ‘You still want to do that? Start grilling steaks.’” From then she was hooked on cooking.

After seven years in England, she returned to South Africa, but the wanderlust came back and she headed to New York. She stayed two days. Apparently, that was plenty. So, she headed West. We asked, “Why San Francisco?” de Waal said, “It wasn’t New York!”

It was in San Francisco where de Waal had her Mexican revelation. “The first time I had a taco in San Francisco, I was like, What’s going on here? Just meat and lime, sometimes you also get chopped onion and cilantro. That’s what started it, that first food truck taco.”

“We lived right in the Mission District which used to be predominantly Latino, but it’s being gentrified quite a bit now. But there still are great Mexican restaurants throughout the Mission; taco trucks, all sorts of food trucks. We lived two blocks away from a really good food truck and it was nothing to go there and grab a burrito, some tacos, whatever and it was just good food there,” Bowers added.

Things went well in San Francisco. The catering business was popular among the tech firms and Bowers was doing well in graphic design, but eventually it got to be too much. They grew weary of the congestion, the traffic and constant construction. Bowers said, “San Francisco is really expensive if you want to retire. We just decided to come back this way.”

They consulted a map and looked from Maine down to Florida. “I’m not interested in four feet of snow outside my door, that won’t be pretty, (Maine) and I’m also not interested in 500% humidity and it’s summer all the time (in Florida), so this was a good medium,” de Waal said. 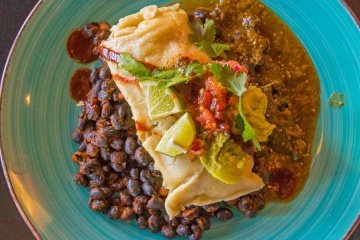 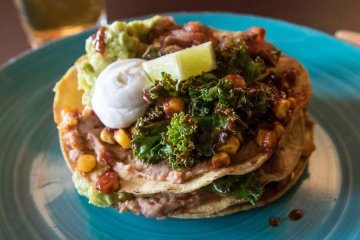 Family was also a factor for Bowers as well. “I had been here (the OBX) several times before. Plus, my family is three hours away, my nieces are having kids now, and it’s a lot easier to fly to South Africa from the East Coast than from San Francisco. We just wanted to get away from the hustle and bustle. We just decided to come back this way. We wanted beachy. We wanted that coastal thing. We flew out in April just to see, and just decided to go ahead and do it. We moved here in July.”

Susan continued to work for her company remotely and Sandra soon found work at The Blue Point in Duck. She let them know she wanted to do her own thing and in six months, the opportunity presented itself. According to de Waal, “I got an email that this space was available. ‘Where is it?’ Oh, it’s the Outer Banks Taco Bar. and I’m like, ‘Are you kidding? Fantastic.’ It all happened really fast.”

A month was spent cleaning, touching up paint, reorganizing the kitchen, building a room divider defining the space between kitchen and dining area and increasing rack space in the kitchen.

They kept the interior color, but added stylized paintings representing main ingredients by Bowers to add brightness and contrast. The effect lightens the space and imparts the feeling of coziness. They opened their doors last May.

The pair is not much into labels, but it is clear de Waal’s concentration is the kitchen while Bowers handles the front-of-the-house. In addition, Bowers handles the bookkeeping and lends her creativity in graphic design to the branding graphics of the restaurant.

The pair encountered the normal challenges are forging a new business, but found great local support. “The first six months were humbling,” de Waal admitted. “There are so many things that can go wrong, which it did. Everything broke. For me, I had to find my feet in there. What works, how is this going to work? But now, fifteen people could walk in, we’re ready. Come on in, we’ll be right with you. If anything happens, we’re ready.” She also credits a boost from her friends at The Blue Point. “We’ve had great support from them.”

Once established, they quickly built a strong following. “We’ve had an amazing local response. We had regulars within the first month,” de Waal said. Visitors have become fans as well. Bowers said, “Some of the tourists say, ‘I haven’t had food like this!’ That makes me happy that people appreciate what she [de Waal] is doing. She makes everything.”