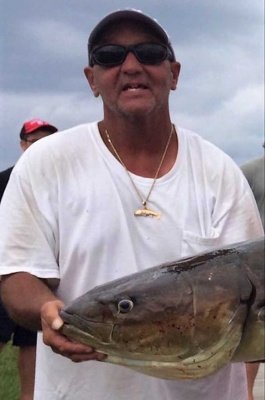 Jerry Dewayne Stokes, 59, of Kill Devil Hills, NC died Tuesday, June 16, 2020, at his home. Jerry loved the Outer Banks which had been his home for most of his life. He met his wife, Debi at the Avalon Fishing Pier where they would later marry. An avid fisherman, Jerry loved saltwater fishing and catching cobia, especially aboard the Rock Solid which was a yearly tradition. Most of all, he enjoyed watching his wife catch the big fish.

Jerry is survived by his wife of 18-years, Debi Lynn Freeman Stokes; two stepsons, Randall Sawyer Scott of Wisconsin, and Michael Neal Scott of Idaho; and his brother, Gary Stokes and wife Donna and their daughter Ivy of Neptune Beach, FL.

In keeping with his wishes, there will be no service at this time. Twiford Funeral Homes, Outer Banks is assisting the family with arrangements. Condolences and memories can be shared at www.TwifordFH.com.