A heartfelt thank you to Good Samaritans

Given the nature of much of the news these days, readers might appreciate a more uplifting story. This email came into the Voice from Christine Fleisher in Duck, who made it clear that she wrote it to “publicly acknowledge thanks to those that helped my husband and I after our accident in Southern Shores on Tuesday” June 23. 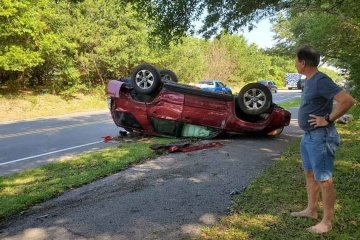 The author and her husband were rescued from this SUV.

Tuesday morning, on our way back from the grocery store, we were heading north on Duck Road in Southern Shores. Another driver, going south on Duck Road, attempted a last-minute left turn as we approached. Even though my husband swerved to the right to avoid hitting this other vehicle, the south bound SUV hit our SUV on the back passenger door behind my husband. The swerve and the hit to our SUV caused our SUV to roll and land on its top.

We did not sustain any serious injuries but were very disoriented because we were hanging upside down held in by our seat belts. Within seconds, Good Samaritans were pounding on the SUV telling us that the doors were locked, and they were trying to get us out. This helped us to get our bearings, but we were unable to figure out how to unlock the doors. I shouted back to those trying to help that I could not figure out how to unlock the doors. I did unlock my seatbelt and was able to re-situate myself in the SUV. Seconds later, I felt someone start to pull me from the SUV. I have no idea how they were able to do this. I was safely removed from the SUV and my husband was able to crawl out on his own.

The Southern Shores Police, EMT and Fire Department arrived shortly after we were out of the SUV.

I would just like to thank everyone who helped us. I have no idea who these people were (I was very shaken up) but they were so kind. People were with me making sure that I was okay, helping me to stand and bringing me my purse from the SUV. Someone who lived nearby by offered their home for us to go to if needed and brought us a cart to collect our groceries and other items from our SUV.

The men & women of the Police, EMT and Fire Departments were so nice to us. We were asking stupid questions (we were still a little disoriented), I had some bleeding and was helped into the ambulance. Even with precautions for COVID-19 in place, I was treated so kindly as they helped me put on a mask. They helped my husband gather up what they could of our groceries (they found two unbroken eggs, amazing!) and continued to make sure we were okay while they directed car and pedestrian traffic, cleaned up all the glass and SUV parts and filled out required reports. I think it was the Fire Chief who gave us a ride back to our home in Duck with our salvaged groceries and items from our SUV.